I've been getting that question for years.

It's because of how I travel. I travel light. If there were a superpower for packing, I would not need it, because I am THAT GOOD.

Here is a photo of my table at a coffeeshop in Boston, with all the stuff I brought with me for a week's worth of traveling and three talks: 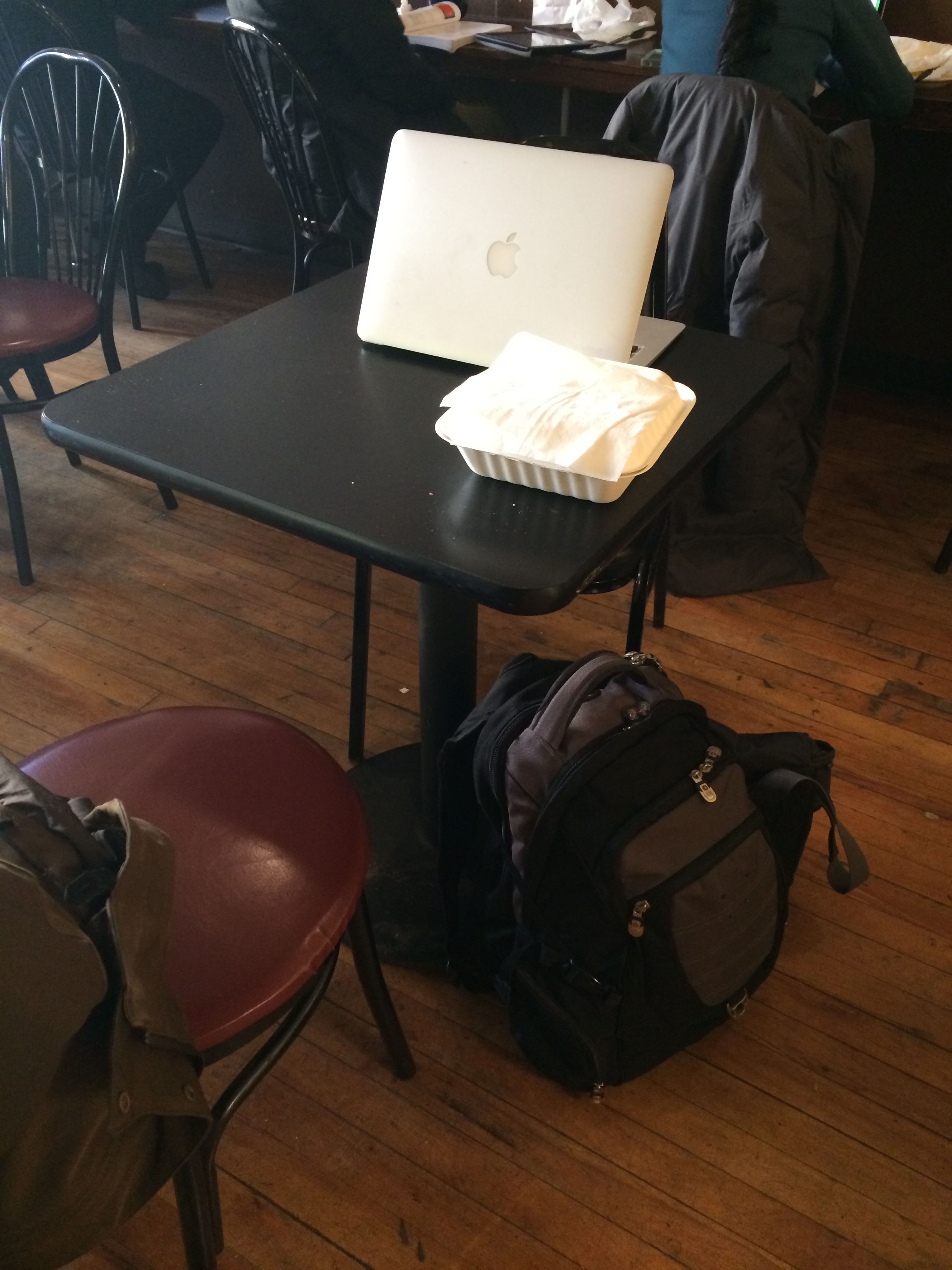 (Not the boxed up food, of course. Those are leftovers from Veggie Galaxy. For what it's worth, though, I could fit two dresses and some tights into a container that size. Easy. If they were sleeveless dresses, then also a long, drapey top to go over them.)

"Meh," you might say. "That's fine and all, but it's only a week. Recycle two outfits, and it's child's play."

But what if I told you that bag contained my laptop, power cords, toiletries, a winter hat and mittens and scarf, two dresses, a sweater, a skirt, two long-sleeved tops, two yoga camisoles, two pairs of yoga pants, tights, the appropriate amount of unmentionables, pajamas, and a pair of knee-high, insulated winter boots?

"Wow, CVD," you'd probably reply. "You really counted all of that? That's a little ... weird." And then I'd mumble something about how I'd just finished unpacking and maybe happened to notice.

But what you might say is "Wow, CVD! That's amazing!! How ever did you fit all that stuff in there? And why would you want to?!"And then I would get all excited, because I am always ready to explain the Method and Motivation for my (practically patented) One Backpack System.

Take a comfy seat, because it all started in the Autumn of '08, when I went to a conference in the UK and agreed to take a friend's giant dufflebag home with me for them. They had warned me it wasn't small, but they had not warned me that it was approximately the size of my then 10-year old child, who was traveling with me. Also, it had probably a good 15 lbs. on him. Added to our own bags, it made the journey from Yorkshire to Paddington and then through the London Underground to our friend's house (and then back through the Tube the next morning to Heathrow) the stuff of nightmares.

(I won't even go into the part where I couldn't bring myself to lie to the airport officials about having packed the bag myself and thus had to drag The Slug [as we'd dubbed it] into a special room where they did all sorts of Official Testing to it and asked me lots of questions, most of which amounted to, "So, why didn't you just lie when we asked you whether you packed this yourself?")

In any event, by the time David, The Slug, and I had all landed safely back home, I had made a solemn vow never to carry anything more than one bag on any trip that involved taking public transit of any kind. Before my next trip, I went out and found the backpack that has become my soul mate, spirit animal, or similar. And we have traveled together in peace and harmony ever since. 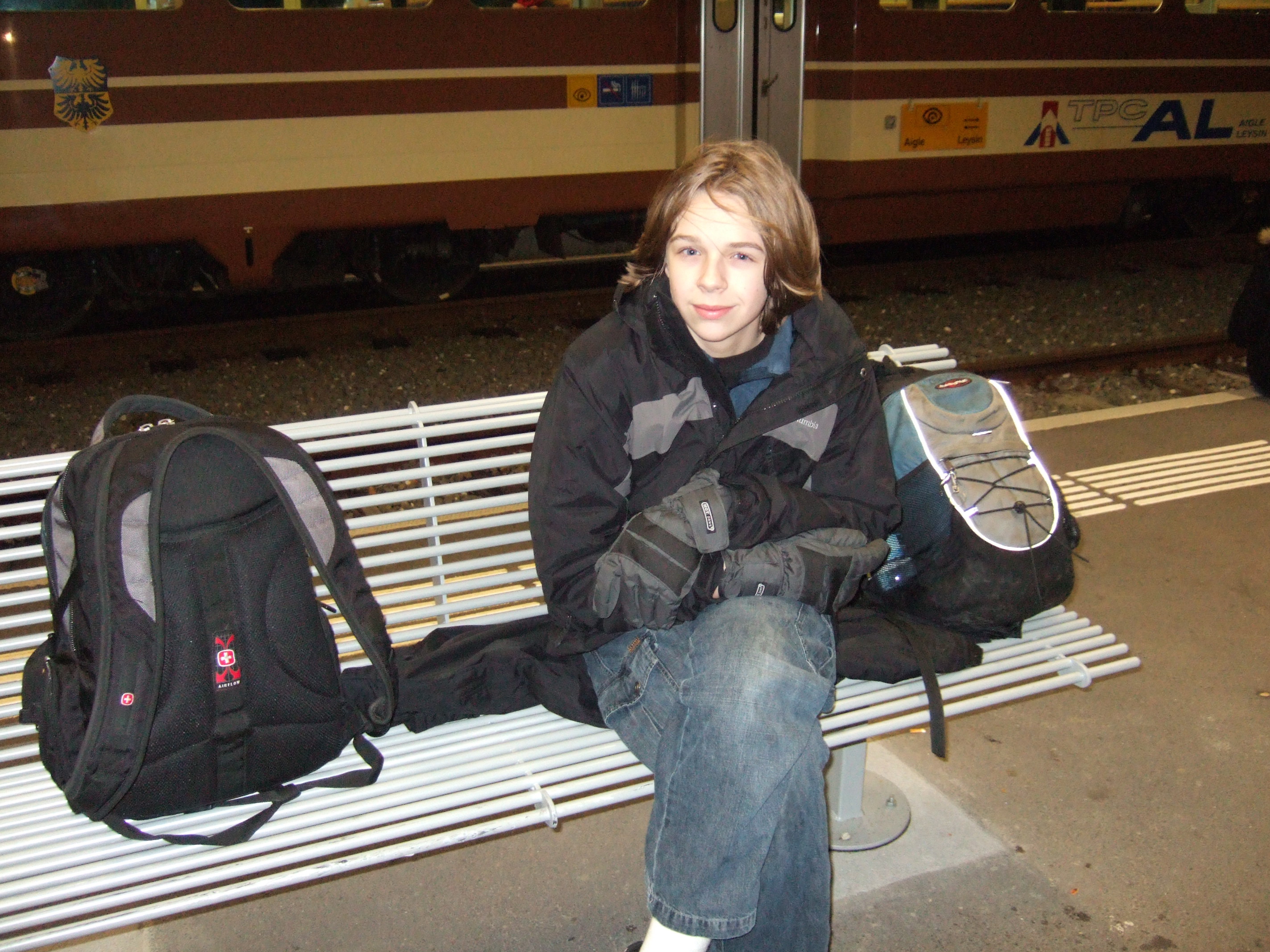 (David with our two backpacks at a bus stop in Switzerland in 2011. My backpack is on the left. David's backpack in this photo has since been supplanted by one that did not have a moldy peanut butter sandwich powdered into its seams for six weeks of 7th grade without his noticing. The photo below is the contents of my backpack on that trip, unpacked.) 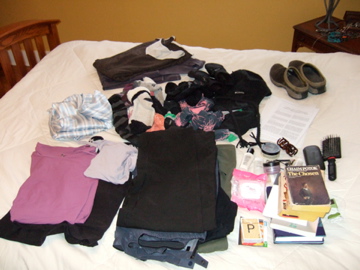 The motivation behind the One Backpack System is as basic as it gets: I was tired of worrying about space in overhead compartments, bumping along uneven sidewalks, and lugging things up and down stairs. Also, I noticed that I would sometimes come back from a trip and not even have worn all the clothes I brought along. And I was delighted at how much I could fit into a backpack when I got strategic.

To be fair, I got the same thrill from fitting everything that David and I needed for an entire year into my VW Jetta wagon, when we moved to Boulder, CO for the 2007-8 academic year. 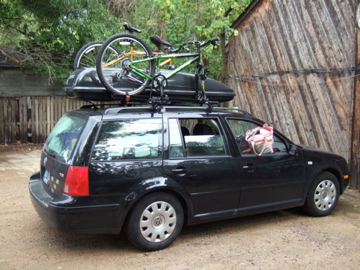 If this whole philosophy-thing doesn't pan out for me, perhaps I'll start a series of training seminars for people who want to pack lighter. ("Repeat after me: one pair of shoes ON, one pair of shoes PACKED.") Until then, I give you three simple rules:

Warning: This aesthetic is not for everyone! My Mom's comment to me in Florence on a genuinely chilly day in January, when I had happily layered on most of what I'd brought with me was, "Are you trying to look like a bag lady?" (Laugh it up, Mom, but I was the one who stayed toasty in the Boboli Gardens, while you and Dad and David shivered.)

Also, you have to be the sort of person who doesn't really care about fashion to pull off the OBS. Or someone who really, really loves to iron. And it obviously doesn't work if you need to bring things like breathing machines and/or yoga mats and/or liquids exceeding 3.3 oz.

Most importantly, you have to not be an ass about traveling light. Your decision to stuff everything you need for six weeks in New Zealand and Australia into one bag is not an indictment of other people's packing choices. It is something quirky you do because it will make your life easier; it says nothing about what other people do to make their lives easier. Don't make it a social/political statement. That's super-obnoxious and not at all in keeping with the One Backpack System ethos of reducing life's difficulties and being more open to others because you are less worried about yourself.

I leave you with a photo of my backpack enjoying some quality 'alone time' at the Harvard Business School. Maybe someday I'll find someone else (besides my child) who also has a backpack and wants to travel with me. That would be awesome. Until then, I travel light. And happy. Because, yes, this is all I've got. And for now, it's all I need. 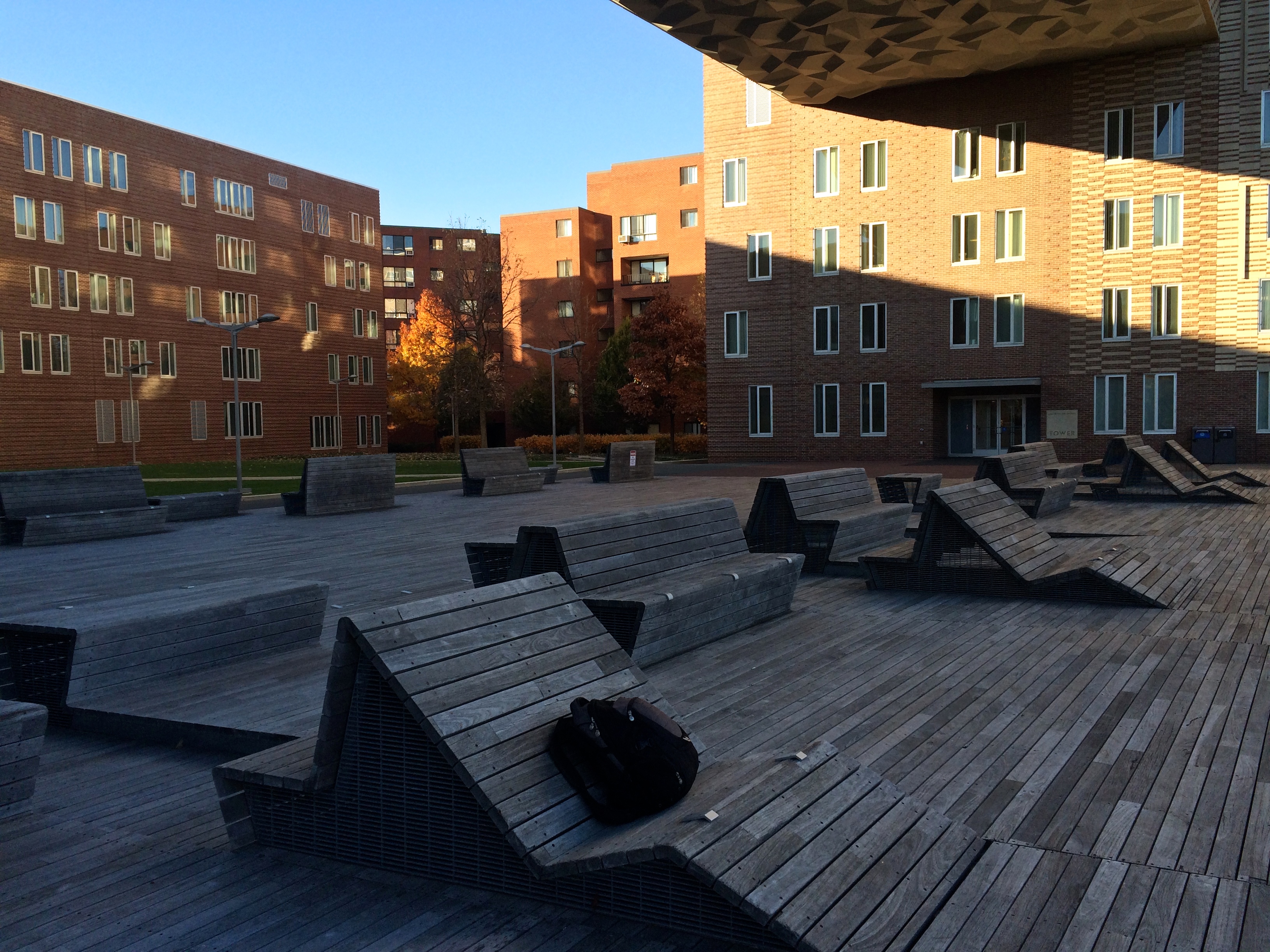