Following the Niceness Where It Leads...

Much has been made of 'Midwestern Nice' (MN): pros, cons, attempted translation guides...and still, no one ever warned me that being a Michigan native from a town where strangers smile at each other on the street could result in pretending to be an eccentric heiress in an upscale restaurant in Istanbul.

(Several of my FB friends posted this article about MN when it came out, which ends with the claim that: "We live on a heightened plane of consciousness that few of you can comprehend. To be from here is, quite simply, to read a room better than fucking anyone." For heaven's sake! That is just not the sort of thing that my Dad--who once told me when I described something as 'fricking ridiculous' that he really liked my blog, but that "it could stand a bit less of that sort of language"-- is going to be comfortable with my even quoting.)

Anyhoo! I arrived in Istanbul later than planned. Lufthansa was on strike, I'd been rebooked on Turkish Air, and--long story short--by the time we finally touched down, I'd been traveling for 20 straight hours.

I was thrilled to be there: it was my first time in Turkey, and as a former Classics major and current medievalist, I was primed to appreciate the dazzling juxtaposition of old and new, Byzantine and Ottoman and European and Muslim. (And, you know, give a talk at the workshop I was officially there for.) I was so excited, in fact, that I had booked a genuinely nice hotel in Beyoğlu for two nights before the conference started and taken the hotel up on their offer to 1) make me a reservation for dinner in the restaurant hotel the night I got in and 2) book me a guide for the next day.

This post is about about 1), but it's worth noting that the guide, Ilknar, was completely amazing and worth every penny. Here we are the next day, at the Hagia Sophia: 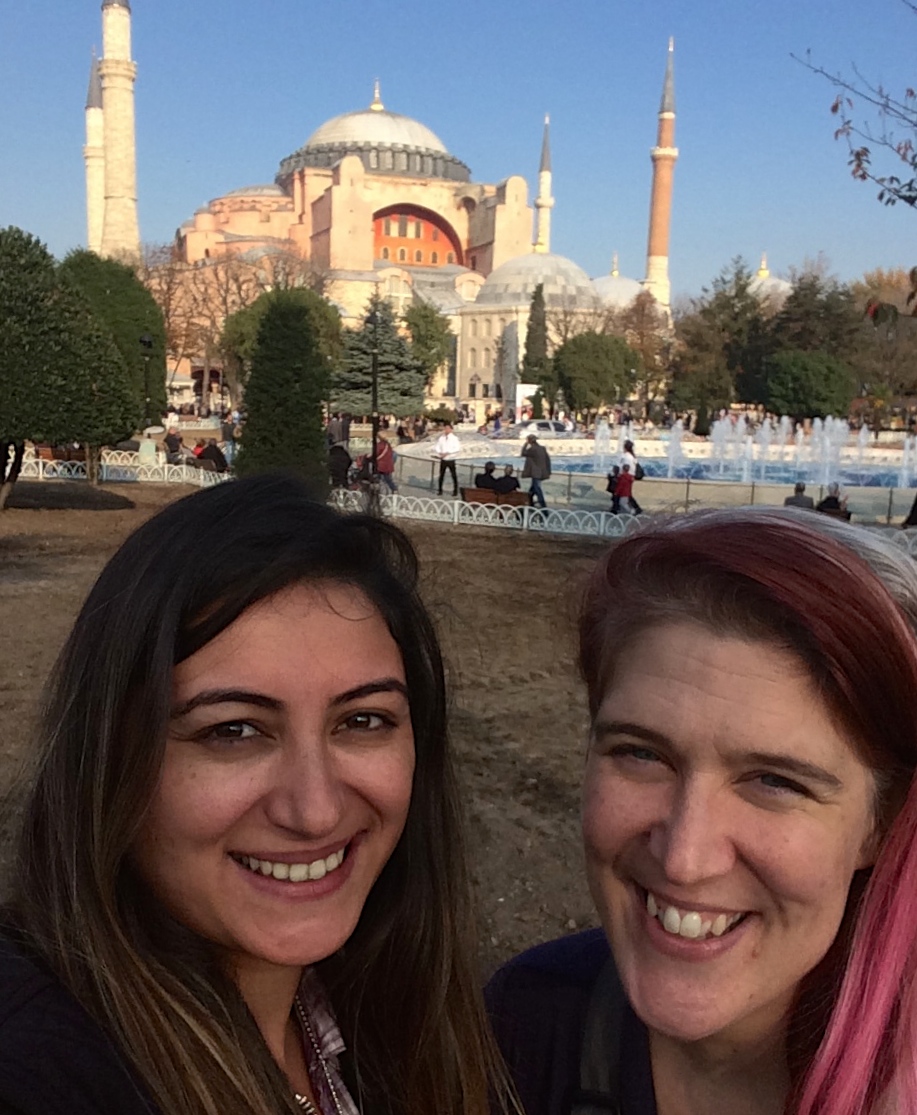 Like I was saying, I finally got to the hotel after 20-some hours of travel, well after I was supposed to eat dinner. That was fine with me--I was exhausted and ready to head straight to bed. But when I checked in, the hotel staff beamed at me so happily when he said, "And we've changed the time of your dinner reservation to 8pm!" that I found myself smiling happily back and saying, "Why, that's just wonderful!"

That gave me 25 minutes to settle into my room and freshen up. My room was lovely...and it had a bathroom with heated marble floors and gigantic bathtub. Hooray for centuries of hamam culture! 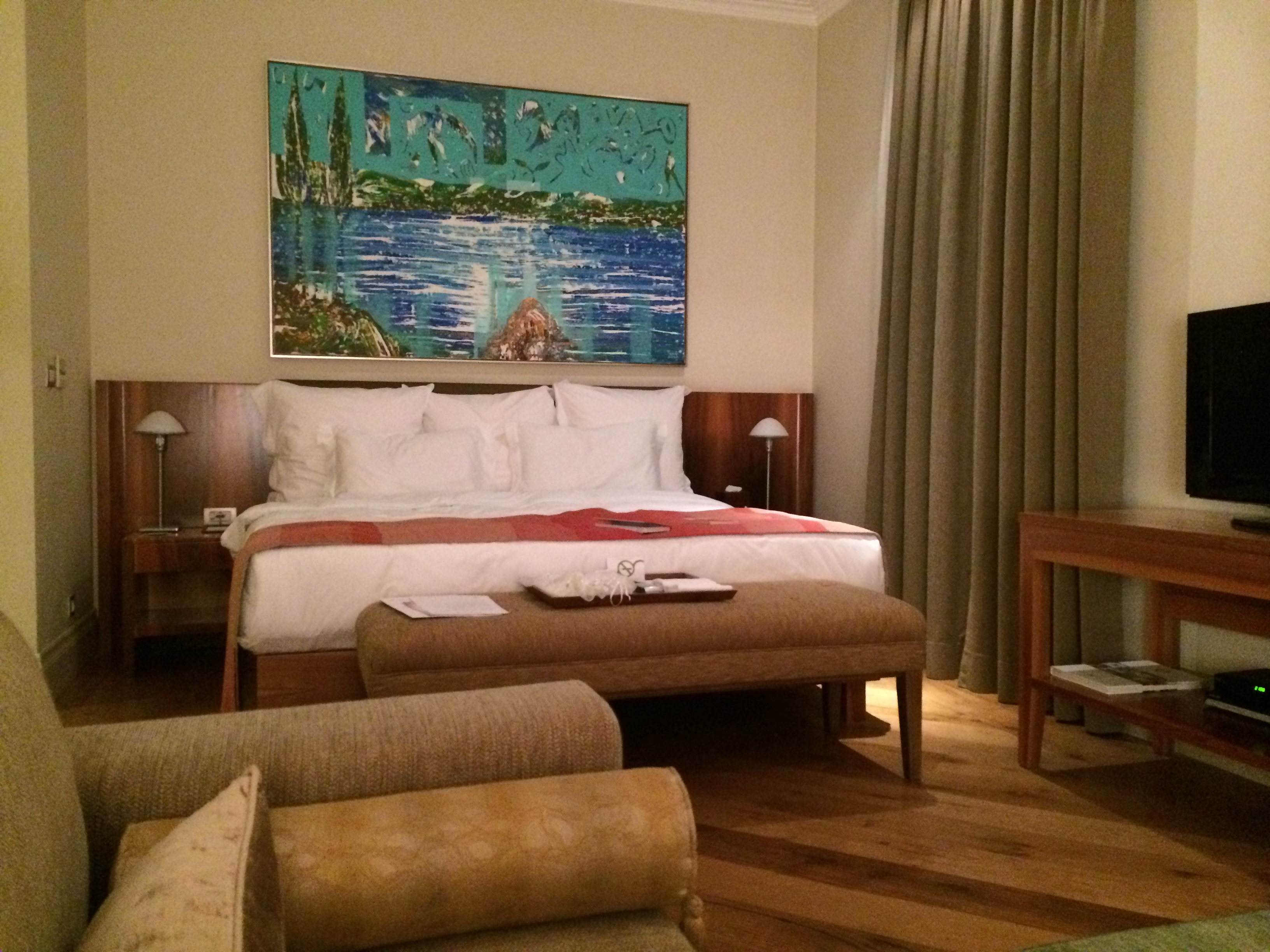 (Two thumbs way, way up for the TomTom Suites!)

At this point, however, I need to introduce another crucial component of the story: my fire ants.

Midwestern Pro-Tip #2: stretching stories out to their logical limit is Good Form.

(Our winters are long, and we spend our summers staring at lakes. Brevity is not a virtue; patience is. Settle in, folks.)

I'd just spent three months dealing with a head-to-toe rash that was apparently the result of thyroid antibodies' activating the mast cells in my skin such that they were consistently dumping large amounts of histamine all over the place. And by "dealing with" I really mean "doing my best not to go completely mental while 1000 angry metaphorical bees swarmed around my head and a host of metaphorical fire ants devoured every inch of my body." Wearing cotton was 'right out' because it felt so scratchy, and it hurt to have my hair touch my skin.

Just four days before I left for Istanbul, in fact, I was still at the point where I couldn't handle anything touching the upper half of my body. My teen-aged son (who is modest to the point of mortification) and I had divided the house in half: I got the second story and he got the first. Since the kitchen is on the first story, this meant that he was in charge of bringing me food when he was home...which he would carefully leave on the landing halfway up the stairs, like I was a plague victim.

Here I am, being resigned to my ridiculous fate: 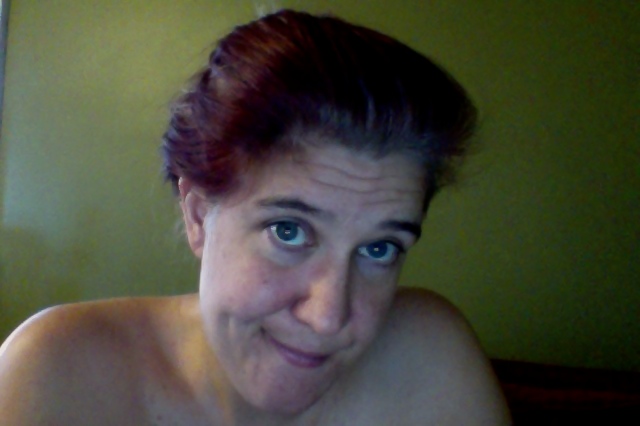 So! The fire ants/angry bees (fire-bees, for short) were just starting to subside as I headed to Istanbul. I could stand to be clad only in 'fire-bee-friendly' clothes bought just for the occasion: loose, light, and whisper-soft...and even those were pushing it a bit. When I got to my hotel room, then, I immediately stripped off the clothes I'd spent the last day traveling in and took a bath in the mineral bath salts I'd brought with me--the only substance I'd found that didn't actively enrage the bees. And it was blissful. Washing my hair was still not an option, however, unless I wanted to eat dinner with my head on fire. And putting my clothes back on was not an exciting prospect.

As a result, when I left for my dinner reservation, I had my unwashed hair piled up in a bun and was wearing my kitty cat slippers (so soft on my feet, like little pillows of refuge in a scratchy land) and a tent dress with capri pants, absent 'supportive undergarment' (I simply couldn't face the thought of wearing anything that tight).

"After all!" I thought to myself, "I can just pop in, have a nice warm bowl of soup, and then pop right back down." And off I padded, up the stairs, to the hotel restaurant.

Midwestern Pro-Tip #3: meals are for Sustaining Purposes and/or Family Togetherness.

(They are certainly not an end in themselves.)

I should, perhaps, have checked out the hotel webpage's description of the restaurant before I left. Because, WOW.

I noticed four things as soon as I stepped in:

"Ms. Van Dyke!" beamed one of them. "Right this way!" cried another, showing me a window-side table smack dab in the middle of the restaurant. 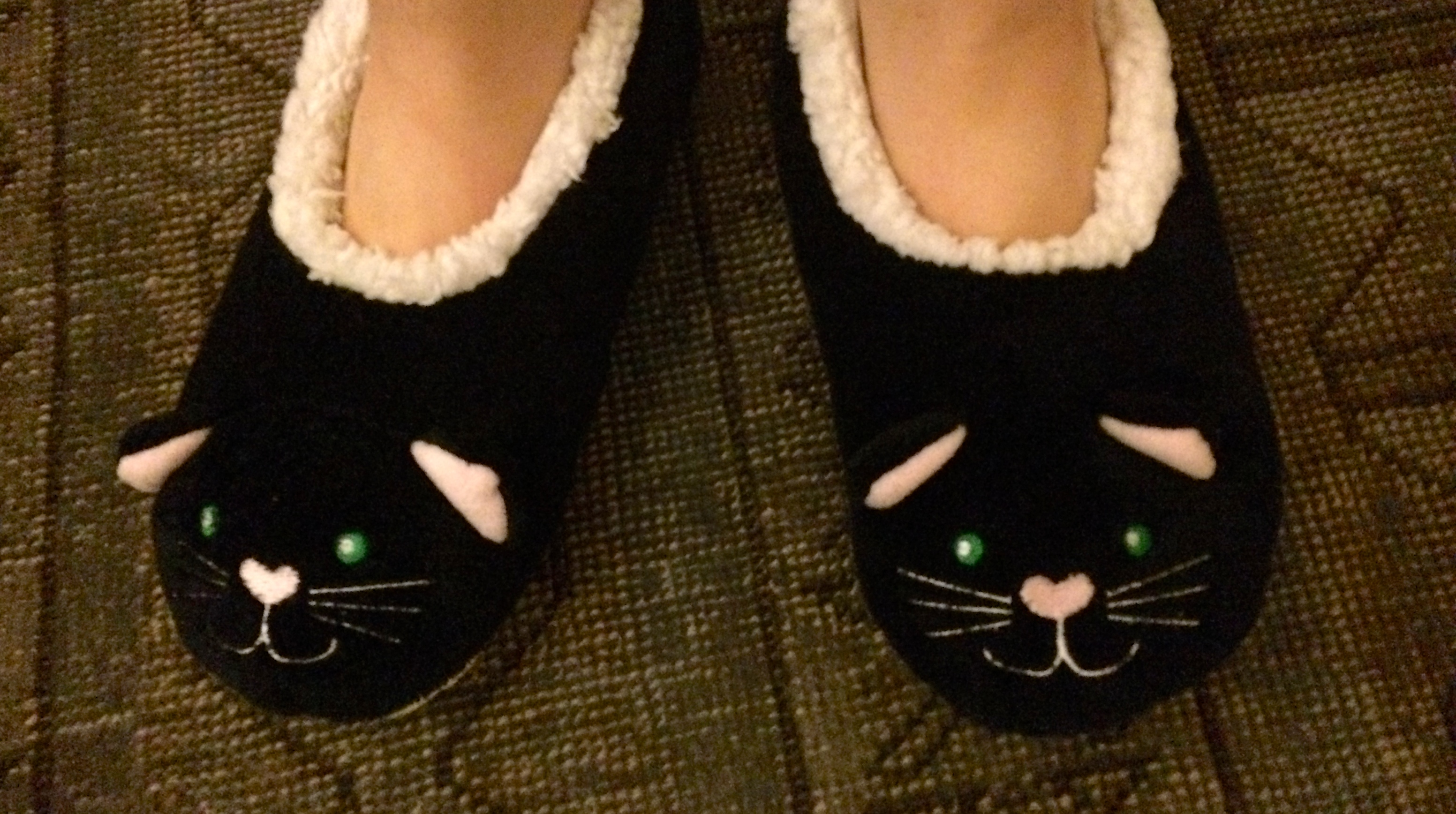 And this is my outfit: 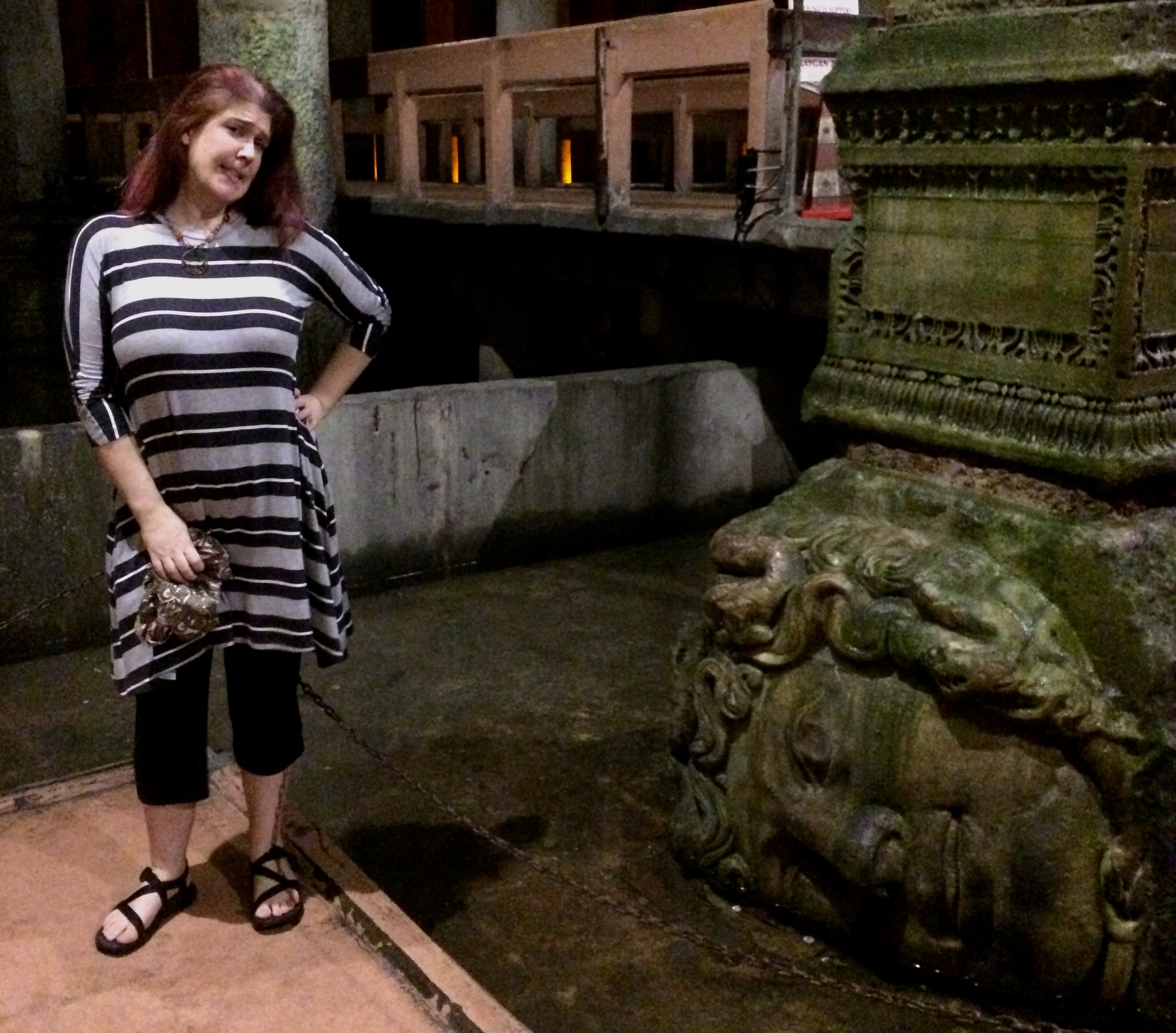 (minus, of course, the necklace, the sandals, and the supportive undergarment that I am wearing here, in the Basilica Cistern)

And there is my table, in prime viewing distance of everyone else in the entire restaurant. Who are, for what it's worth, all wearing suits or LBDs (with heels).

What's a good Midwestern girl to do in this situation? Well, let me tell you what she's to do. She's to lift her frickin' chin, smile nicely at the eager waitstaff, and express nothing but delight at her table and its ideal location. Not from pride or for family honor; not to save face or avoid embarrassment. Nope. Simply because...

Midwestern Pro-Tip #4: In any given situation, one always does What Needs To Be Done.

First Corollary: "And one does so without making a fuss about it."

Plus, I was still thinking I was just in this for a bowl of soup before I ran away again. Because let's get this clear: I may have pink hair, but that's not because I like to be stared at. (I do not actually like to be stared at.) Also, while there are any number of women who may let their chestal regions go free on a regular basis, I am not one of them. I am a 'my cup runneth over'-type woman, and I don't think I've left the house without giving my "attributes" some support since I was in 7th grade. Still! One can handle almost anything for the duration of a bowl of soup.

And then one of the waiters brought me the menu.

There were only two options listed: the 'Discovery' menu, and the 'Nicole' menu. The Discovery menu consisted of five courses; the Nicole menu of seven. I weakly mumbled something about "maybe just some soup?" The waiter blinked at me in friendly incomprehension.

It was at that moment, as I stared into the abyss of a five-course meal after 20+ hours of travel, while wearing my kitty slippers and hoping rather desperately that it wasn't going to get too cold in the restaurant, that I knew that it was time to fall back on that oldest Midwestern principle of all:

Midwestern Pro-Tip #5: no matter what happens, you must Make The Best Of It.

And so I decided I was going to pretend that I was an eccentric heiress who regularly wandered into Michelin-quality restaurants with her kitty slippers and her hair in a bun to eat five-course meals in a tent dress.

"The Discovery Menu, please," I said. "With the wine pairing." 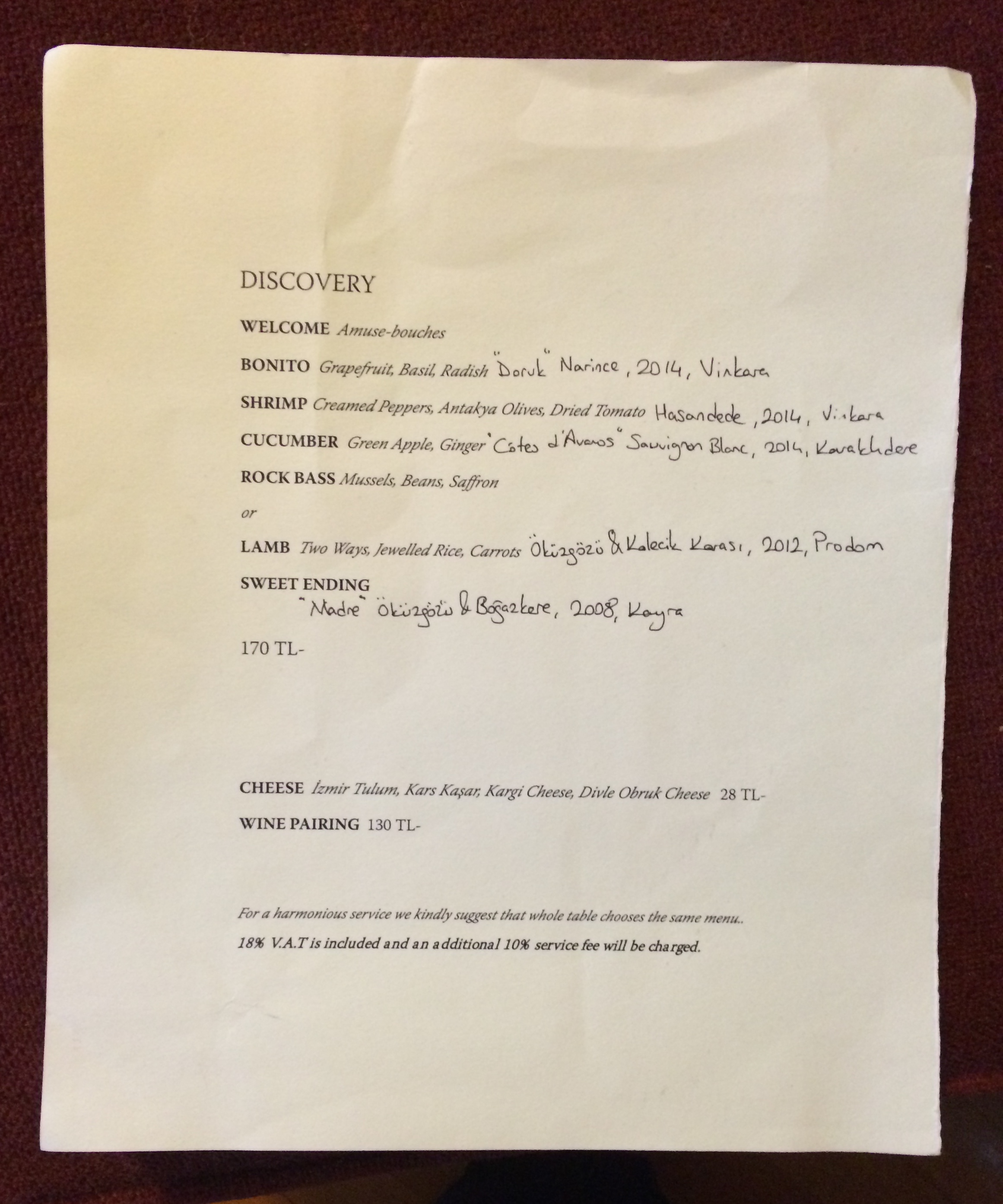 (The sommelier seemed so pleased when I asked him if he wouldn't mind writing down the wines that he'd paired with the various courses.)

And there I sat for the next 2.5 hours, without phone or book or conversational partner, as courses came and courses went. I'm usually a vegetarian, but I ate everything they brought me. I watched the subtle female rivalry between the three Russian girls at the table next to me. (The skinniest and blondest one with the highest heels was the clear leader, but definitely not because the other two liked her.) I tried to figure out whether the couple just past them were romantically involved or just work colleagues. (They were not comfortable enough with each other to be friends.) I stared out the window at the lights twinkling below me and wondered what it would be like to explore the city the next day.

The restaurant was the sort of place where, when I accidentally scraped my plate with my knife trying to cut something, a waiter immediately ran over with a sharper knife. And where the chefs come out to talk to each of their guests...twice. And where the wine pairing for each course involved a lengthy description of the notes and flavors I should expect. And where the 'sweet ending' involved three separate courses. And, of course, where, when I finally gave up and stood to visit the restroom, a waiter sprang to my side to escort me as I padded majestically across the restaurant in all my unbounded glory.

I spent approximately 140 USD on that dinner. But I tell you what--it was one of the best meals of my life. And I slept like a baby that night, replete with good things and secure in the knowledge that eccentric heiresses should be so lucky as to come from the Midwest.