Today is the Winter Solstice - the shortest day and the longest night of the year - a day for snuggling into blankets and telling stories about the holy and mysterious interplay of light and darkness, while the wind howls and bare branches scrape the sky.

So gather 'round, and listen to a new tale:

of grinning heads on stakes...

of debauched saints and frightened birds.

'Tis the tale of our neighbors' Christmas decorations.

As with all the best stories, this one begins many years in the past. (Snuggle a bit further into your seat, my child. Take a sip of your hot cocoa.)

Long, long ago, when I was but a college student in the vast Northern wilds of Michigan, I labored at various jobs around campus, including tutoring at the English Department's Rhetoric Center. One wintry day, a new student appeared and asked for help with his paper. Little could I have known what a momentous occasion this would be! For it was this very student whose words would echo down down the years to me when first I saw the horror of which I speak.

"I have to write a paper on Heart of Darkness for English 101," said the lad to me, "And I wanted some feedback on my thesis statement."

When I looked down at the paper he pushed tentatively across the table, this is what I saw:

"In his book heart of darkness Joseph Conrad by having the heads on the fenceposts shows that Kurtz has no conscience. These heads were the heads that people had had in their lives and that Kurtz had killed."

I stared in disbelief, but the words remained the same:

"These heads were the heads that people had had in their lives and that Kurtz had killed."

I tried to say something - anything - to indicate that perhaps the reader could take for granted that people had, indeed, possessed those heads prior to Kurtz's murderous acts, but involuntary convulsions of my diaphragm and small bubbles of air kept choking my attempts to speak. Eyes streaming, I persevered, continuing to scan the paper for something safe on which to focus.

Alas! Alas. For the very first point the strapping lad used to support his thesis was the following:

"The heads' smiles shows that Kurtz had no conscience. Why? Well, I spent a summer working in a mortician's office, and I can tell you exactly how hard it is to put a smile on the dead man's face."

My friends - my dear friends - it was at this moment that my hard-won composure, honed over years of misplaced modifiers and malapropisms, deserted me entirely. And so, as decades have come and gone, I have passed down the tale of The Student Who Broke Me. Truly, his words about the heads that people had had in their lives and that Kurtz had killed - the heads with smiles forced upon them against the will of death itself - have haunted my days and whispered through my nights this past quarter-century.

(Now pull your warm wrap closer, my dear, for the story grows ever more chill.)

As the leaves began to fall and the days to shorten this year, our neighbor to the north gave us warning that they celebrate Yuletide with much vigor and some excess. The sturdy stone wood-burning oven in his backyard led us to believe this might involve Yule logs, roasting whole oxen, or perhaps wassail and feats of strength. Yet the days passed, and the north remained still.

Until one day, when we returned home from a journey to find this: 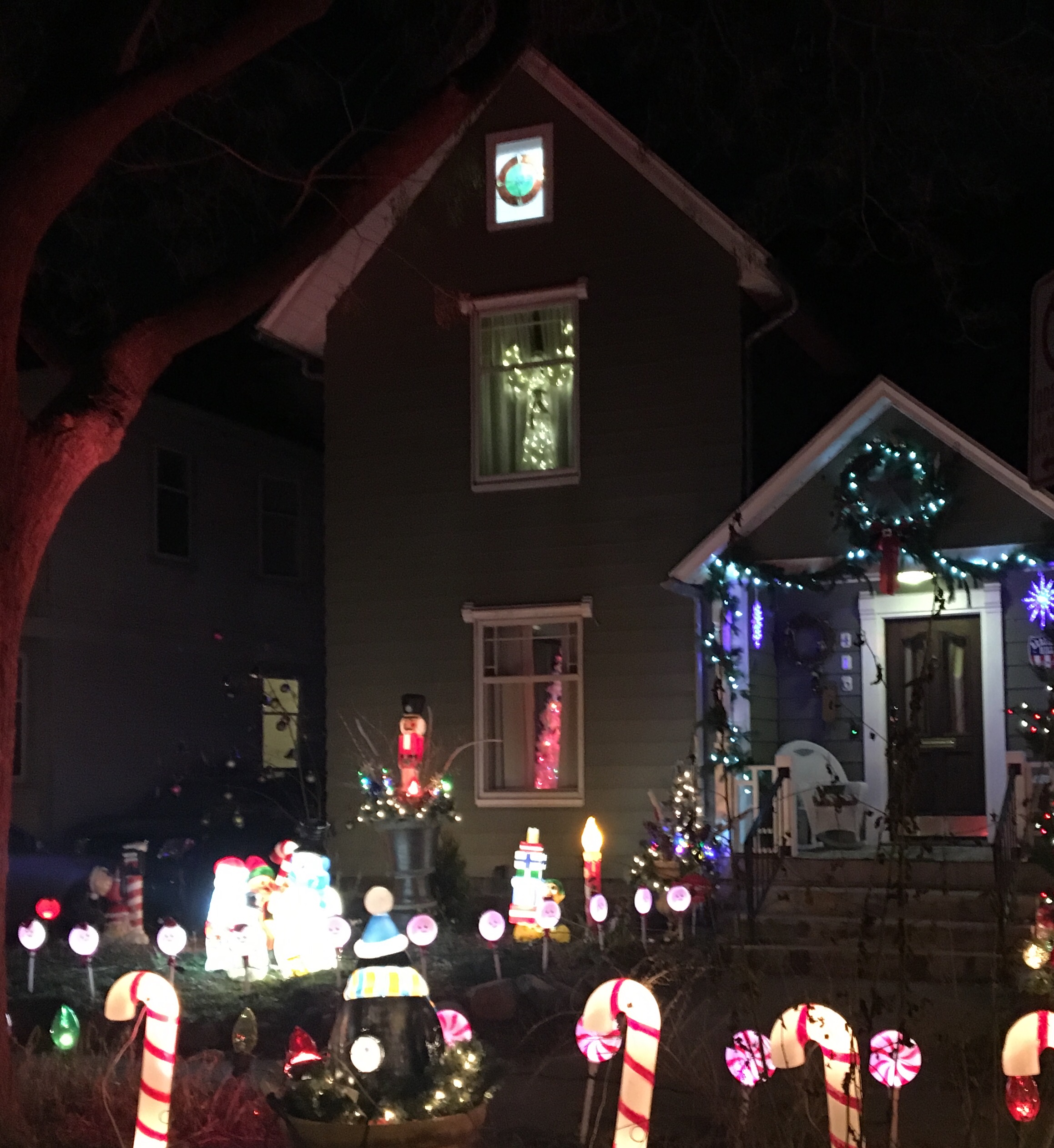 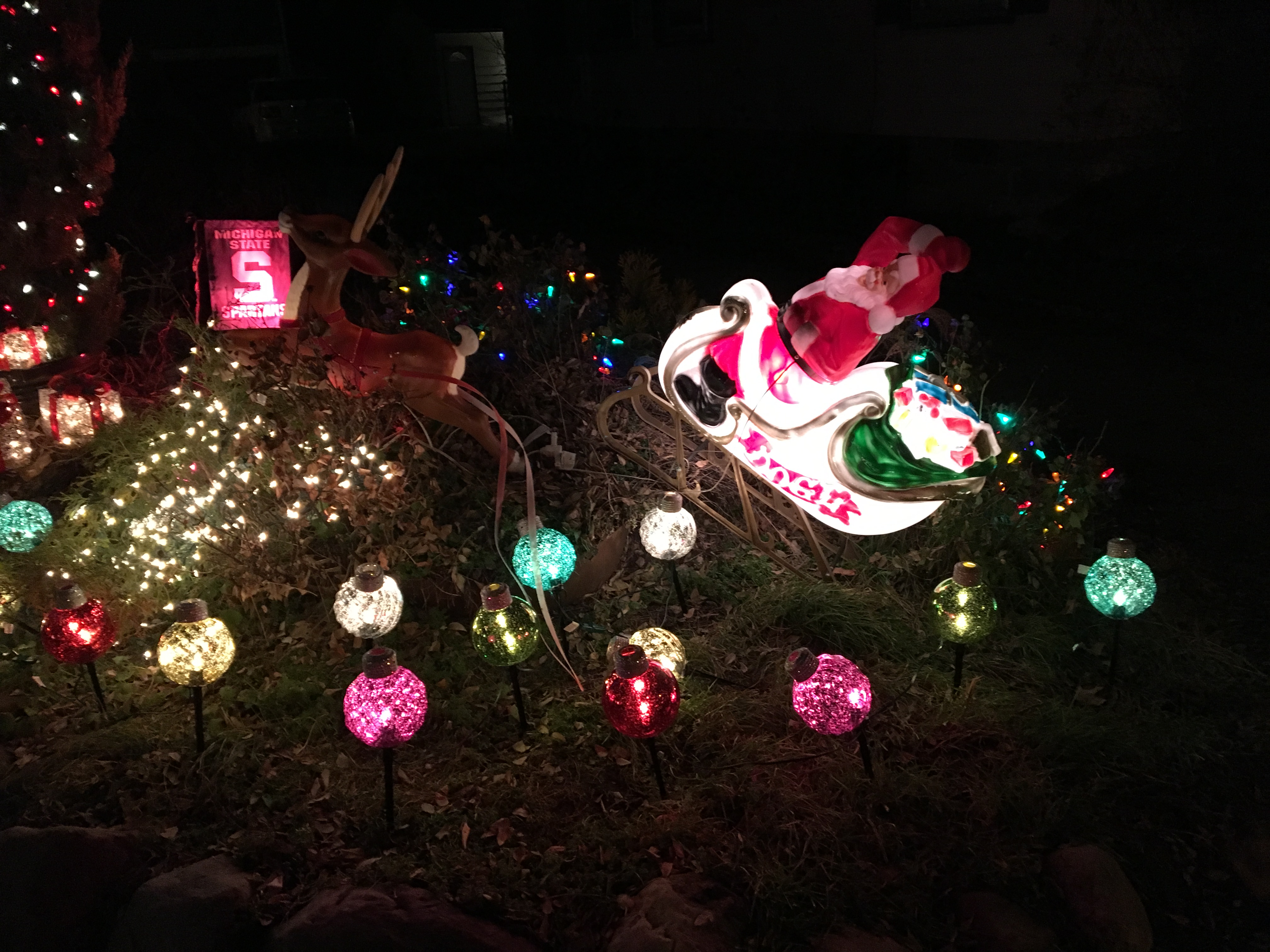 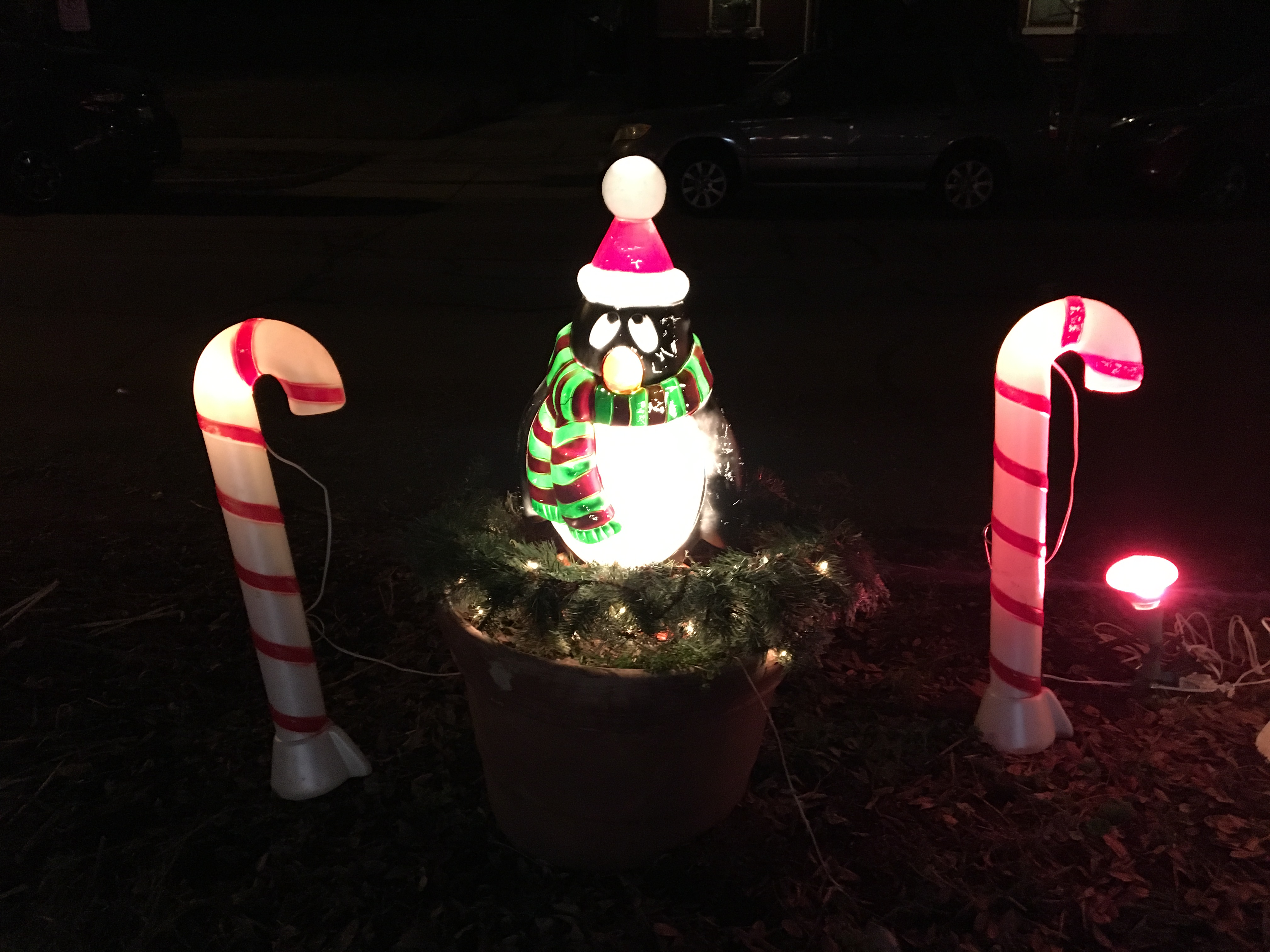 At first, we were merely confused. Had there been a battle? Was this a siege? Did our neighbors require our aid?! We looked more closely...

I saw the heads on the fenceposts. I saw their smiles - each one identical in its contorted visage. 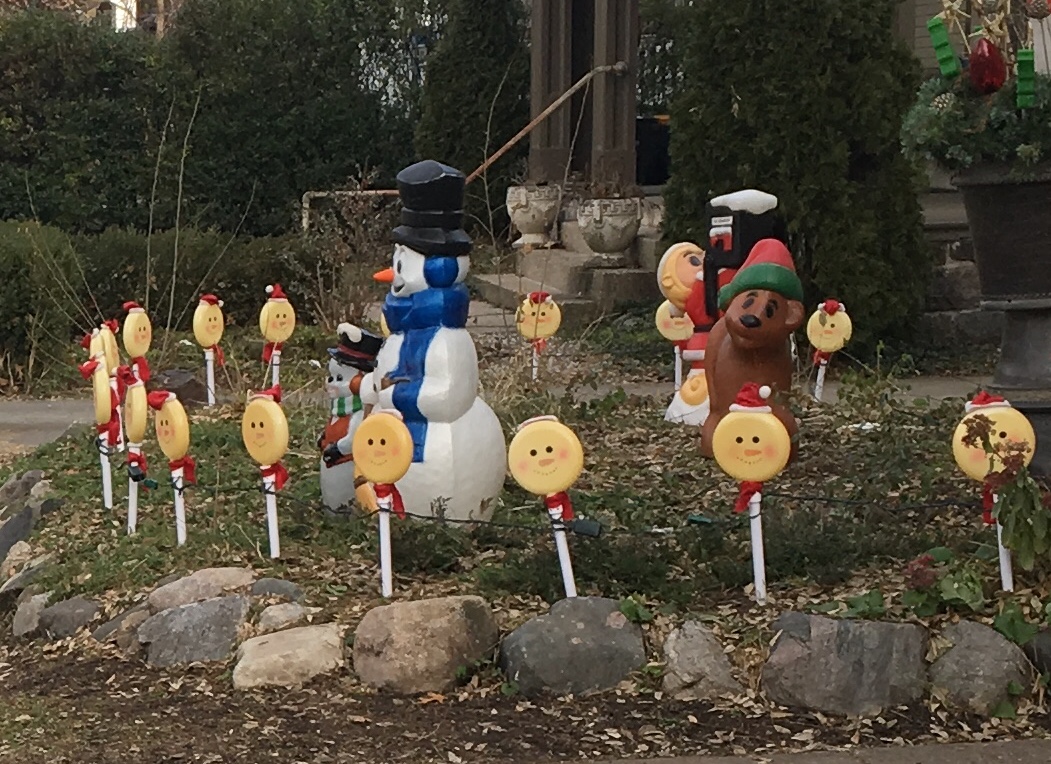 That heteronormative "snow-white" family had surrounded itself with the severed heads of its enemies. And our neighbors had aided them in their efforts.

Penguins - perennial symbols of the Global South - had been positioned to face the heads. Yet they could not look. Perhaps they knew whose heads those heads had once been. Perhaps they had seen just what it took to fix those smiles upon those lifeless faces. 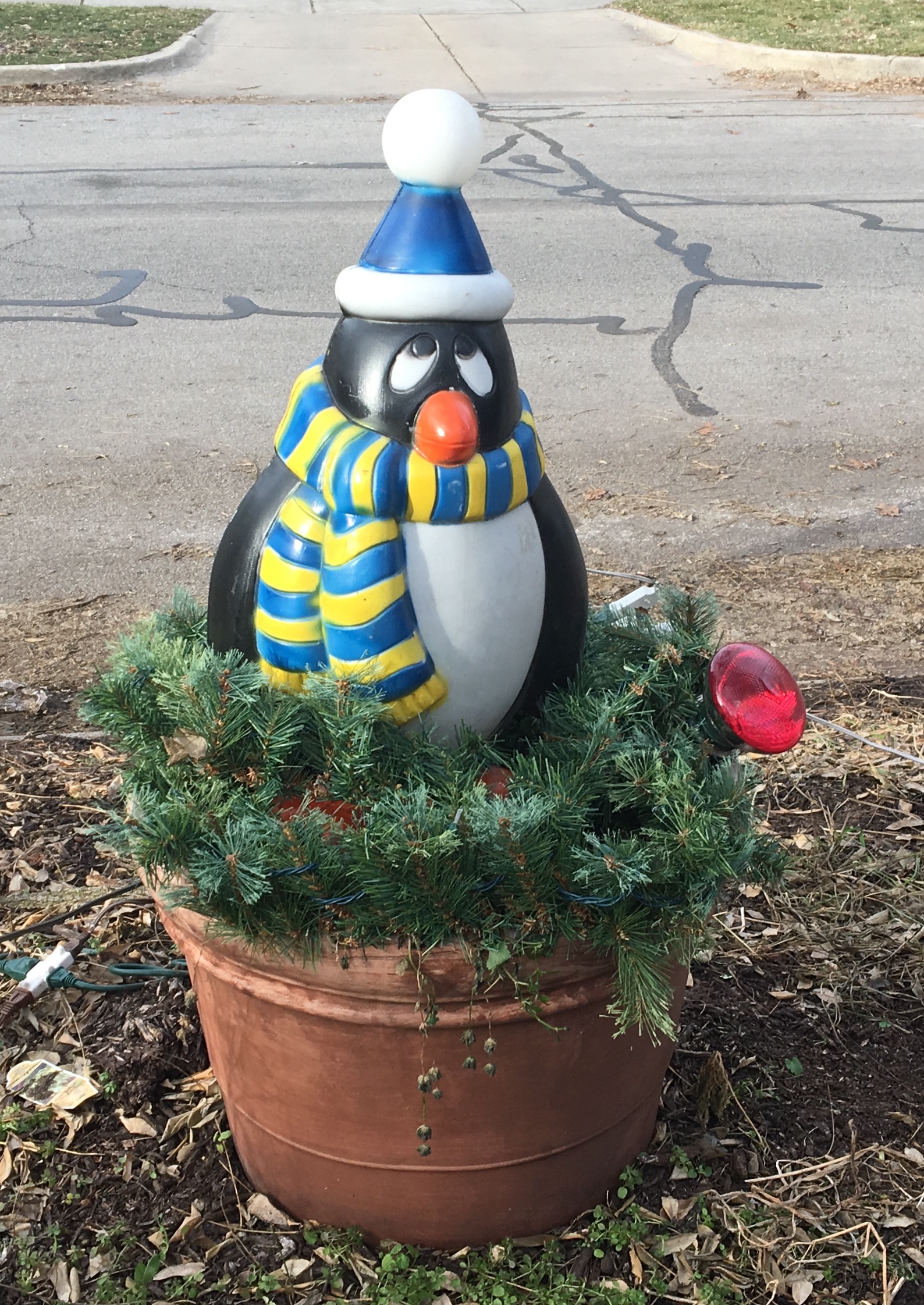 Perhaps they knew what was to come. Because then full night fell, and our horror grew.

For the heads did not diminish with the day, but rather began to glow with their own blinking, pulsating light. 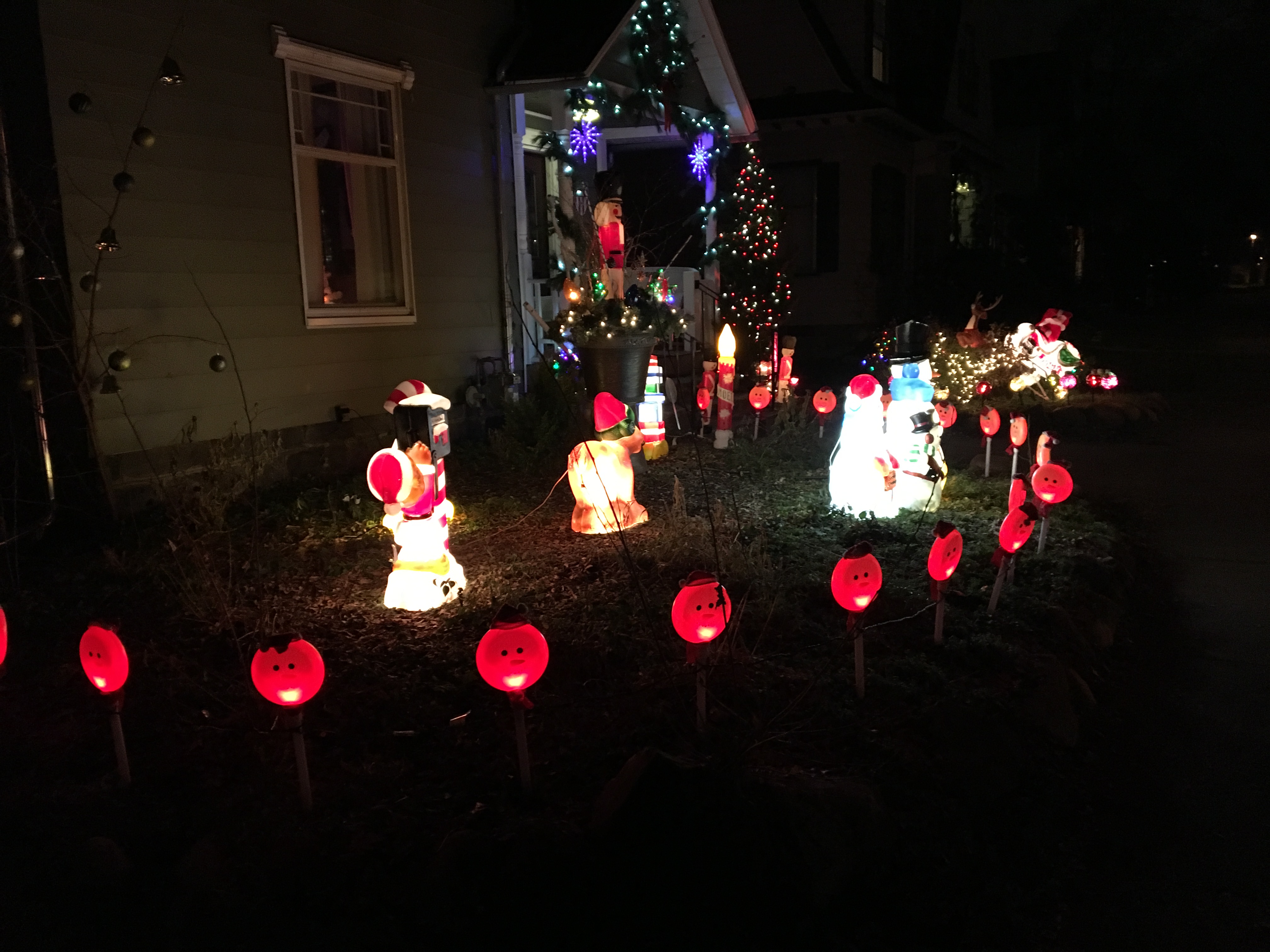 The whole scene was lit with flickering shades of red, blue, green, all while a spectral figure watched from above. 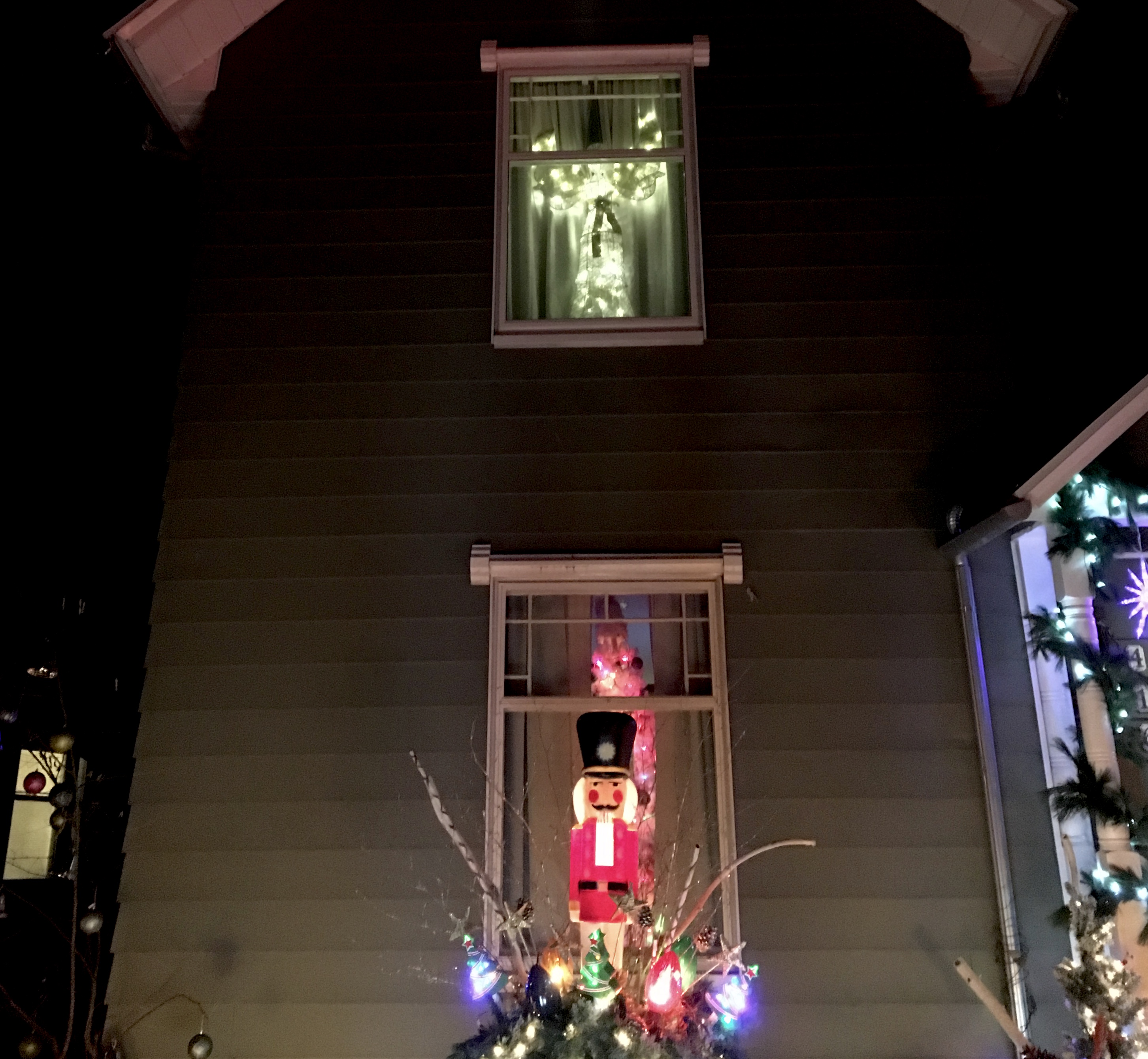 Who is this figure? Why, who could it be but Kurtz's Intended, gazing unknowing past the horror below:

She put out her arms as if after a retreating figure, stretching them back and with clasped pale hands across the fading and narrow sheen of the window...I shall see this eloquent phantom as long as I live - a tragic and familiar Shade.

And so - my dear ones - on this longest winter night, as we are surrounded in darkness, take comfort in the lights of candle and love and life. And do your best to block the sight of the ever-grinning heads from your mind's eye! 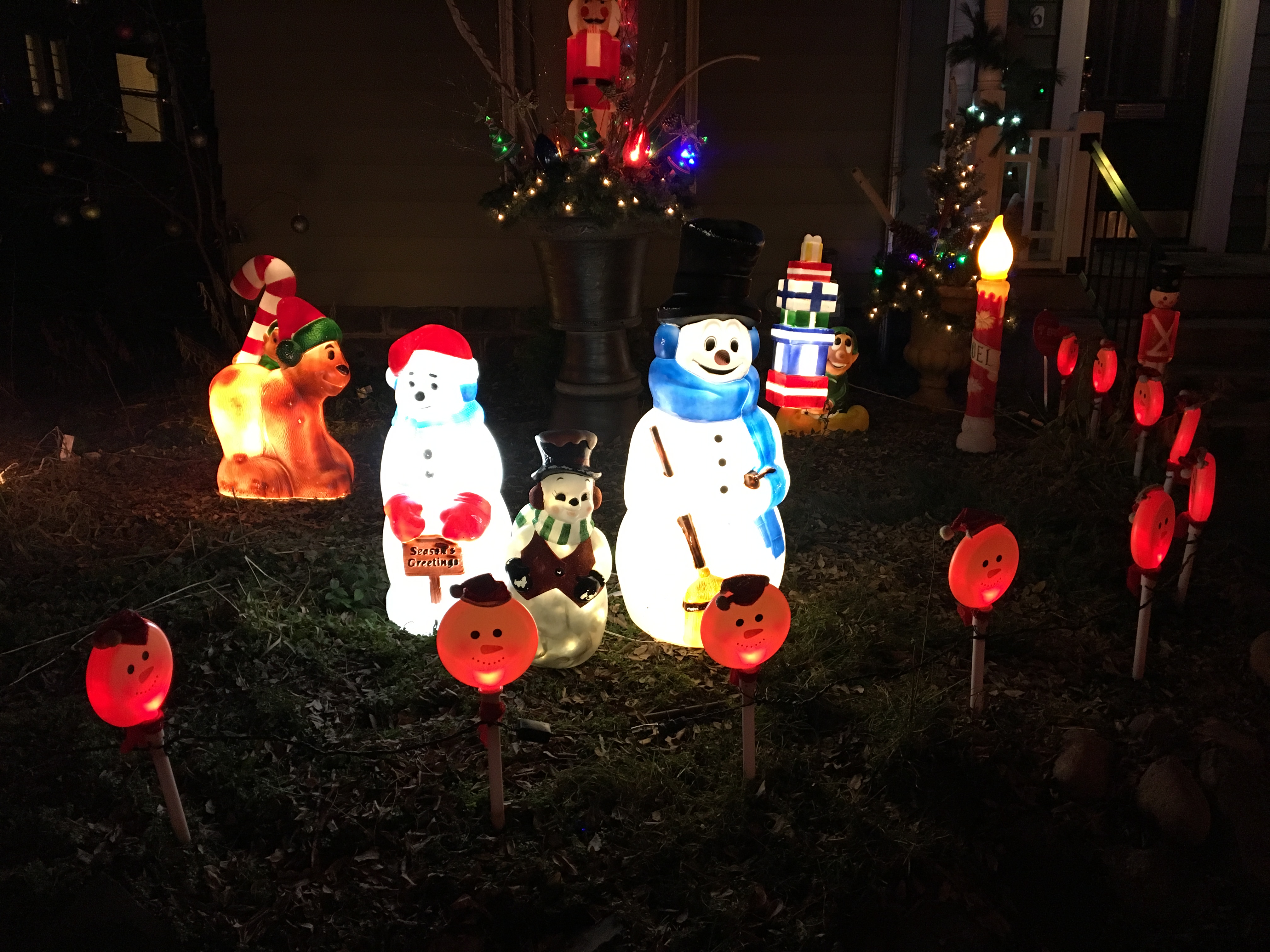 But never forget that they see you.

Oh yes, they see you. And they smile.

scholar, mother, and proud owner of the largest couch in creation
×You've successfully subscribed to Whimsy & Wisdom
×Great! Next, complete checkout for full access to Whimsy & Wisdom
×Welcome back! You've successfully signed in.
×Success! Your account is fully activated, you now have access to all content. Check your email If you are not already signed in.