No Pressure! Being Merry

So I'm not sure if the outpouring of love for my FB announcement was because I was starting a blog, or because I got my sabbatical. Either way, thanks! And, um, eek!! No pressure or anything. 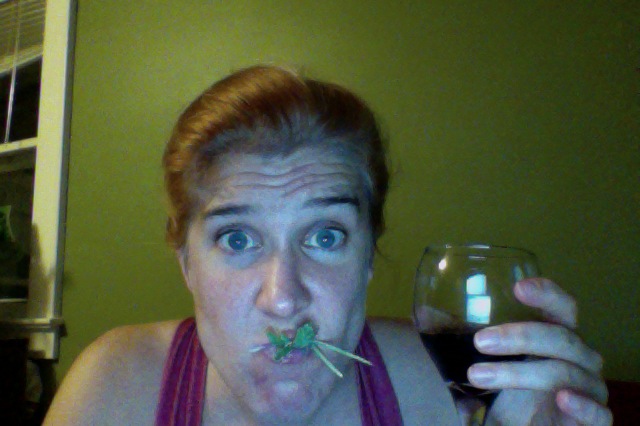 (This is me under pressure. As with most things, I handle pressure with grace and aplomb.)

In any event, when I realized that some people were actually excited about reading what I wrote, I started thinking, "Wow--this blog had better be REALLY GOOD. All and only HIGH QUALITY MUSINGS for this blog: funny, poignant, thought-provoking...if people are not too sore from holding their sides to wipe away their tears, I have failed."

And then I remembered that the whole point of this experiment was to squelch my wildly perfectionistic tendencies long enough to play around and have fun. To that end, then, I have decided to share a recent realization, which is which Lord of the Rings character I would be. (Spoiler alert: it's Merry.) Since this realization has all the relevance and credibility of a Playbuzz quiz, I figured it was a great place to start.

Here the deal: I have loved the Lord of the Rings saga since I first read it, the summer I turned 10. I read all three books in a row, and then I went right back and read them all over again. And then I taught myself the Angerthas runes in Appendix E so I could translate the inscription on Balin's tomb in the first book ... at which point my mother took the books away and wouldn't give them back until I'd read a bunch of 'realistic' fiction and assured her I wasn't going to lose touch with 'reality'. (The fact that I feel the need to put those words in quotes probably tells you how effective her efforts were.)

When I was growing up, I would re-read the trilogy every few years; my present to myself on passing my A-exams at Cornell -- the 3-hour oral defense on a dissertation prospectus and chapter that confers your master's degree and makes you ABD -- was the gorgeous red leather-bound edition that had enchanted me in elementary school.

Over the years, I wanted to be like various characters. Arwen, for all the obvious reasons; Eowyn for all the even more obvious reasons. (Elf-maiden? Warrior-maiden?! Brave, tragic, and beautiful!?! Sign this idealistic girl right up!) Definitely one of the elves or one of the Riders, though. Clear-eyed and noble, grave and wise ... and with the added bonus of kick-ass outfits. (Yes, my mind was completely blown later by Trinity in the Matrix.)

The thing is, I may be brave, but I am hardly tragic -- even when going through genuine tragedies. And no one has ever called me 'grave' or 'noble' (at least not with a straight face). I fight the good fight, but I'm not the sort of person likely to be rallying the undead troops or waging mortal combat with the Lord of the Nazgul.

I am, however, exactly the sort of person whose Big Moment might involve poking someone really hard in the back of the knee.

I'm also the sort of person who would hang out with Ents and look for snacks in Isengard. I would love the chance to smoke a pipe with Theoden. And drink beer and sing silly songs at the Prancing Pony. And then spend years helping clean up the Shire. (The completion of which clean-up I would definitely celebrate with a giant party.)

In short, I've come to accept that of all the noble characters available, I'm most like Meriadoc Brandybuck. I'm perennially light-hearted and (as people love to tell me) child-like in many ways, and if what I've gone through in the first four decades of my life hasn't cured me of that, I doubt anything in the next four decades will.

And I've decided that that's actually kind of awesome. Because Merry might not be the most central or memorable figure in Middle Earth, but who would want to be there without him?

Note: It is vital -- absolutely vital -- that no one think that I'm talking here about Merry from the movies. Because as adorable as Dominic Monaghan is, no one has ever looked derpier in a helmet. Like, ever. And also, Theoden in the movies is a total douchemonkey. Horrible. No one in their right mind would want to hang out with him and talk herb lore or smoke a pipe. They would just want him to be like he is the books already and stop being so awful.

No excuses left not to try something new...