My only child starts his senior year of high school tomorrow, and I'm not waxing at all sentimental about that fact. Unless, of course, by 'sentimental' you mean 'experiencing all the feels possible'.

I'm not great at endings or transitions, especially in anticipation. I remember sitting on the love-seat in our apartment in Ithaca, NY, four years into grad school and eight months pregnant, crying my eyes out because one day David was going to grow up and go away to college. (I am perfectly aware that this was ridiculous! It's like how the ending of "Love You Forever" always chokes me up even though the rest of the book is nothing short of stalky-bizarre.)

Not surprisingly, then, I'm feeling like the onset of David's last year at home is the Beginning of the End. The two of us moved into this house when David was four, and we've kept each other cheerful company here ever since. I've walked him to elementary school from here, driven him to middle school, and tried (in vain!) to convince him to get his driver's license so he can drive himself to high school. For the last thirteen years, he's the other person whose crap has been strewn throughout the house, whose absentminded humming I hear when I'm reading upstairs, whose hugs I still get every night before bed. (Amusingly, it's often my bedtime rather than his that occasions the hug now. Child is a serious a night owl!) A large part of me wants nothing more than to keep him with me for the rest of forever.

But that's not how parenting works. It's time, and he's ready. I get him for one more year, and then we both get to start new adventures.

Plus, my attempt to wallow tonight in bittersweet memories of Ghosts of First Days of School Past has been foiled by the fact that I only managed to remember to take photos of about five of those days. David and I often joke about the fact that if we didn't travel together so much, there would be almost no photographic evidence of his existence. I may be full of feels, but that has never translated into affection for school pictures, portrait studios, or posed photographs at home. 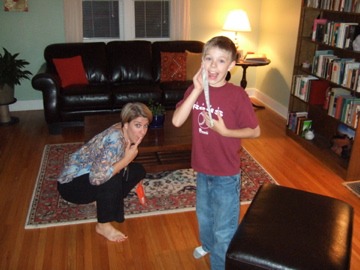 (This is literally the only photo I could find of the two of us together in our home, and it is one in which David is holding a moose jawbone up to his own face, and I am holding the pooper-hole-digger our friend Marty has just given us for backwoods camping.)

So, instead of a blog post full of photos of school-ready Davids, I'm sharing something that's actually much more meaningful to me: the letter that he got shortly after he was born from Norman Kretzmann.

I only knew Norman for four years (I met him when I got to Cornell in 1994, at which point he already had terminal cancer), but he changed my life. It wasn't so much that it had never occurred to me to specialize in medieval philosophy before I'd met him. It was the way that, no matter what I went to talk to him about, I'd leave his office with an armful of books from his shelves and the burning certainty that he believed I was going to do something genuinely interesting with the topic we'd just discussed. It was the way that he enjoyed both his career and his life. It was the way that he showed me that it was possible to be a ground-breaking intellectual and a well-adjusted human being without compromising on either score.

I was six months pregnant when Norman told me that his cancer had spread to the point where he had at most a year left. And that settled David's middle name. I couldn't--and still can't--imagine anyone I'd rather have my child be a living reminder of.

This is Norman holding his namesake in the hospital, the day after David was born: 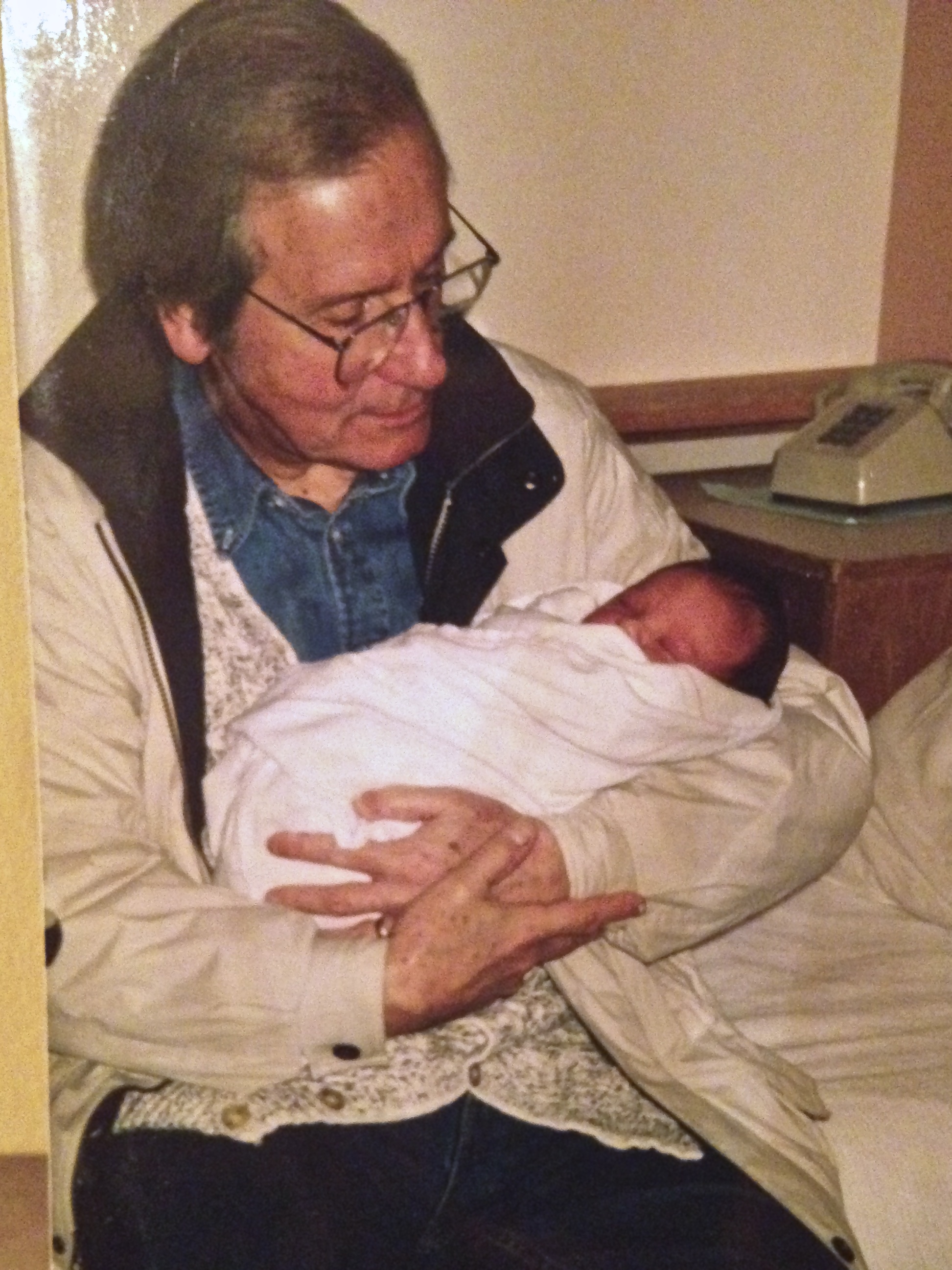 We told Norman what David's full name was for the first time while Norman was holding David that day. He went home and wrote David this letter: 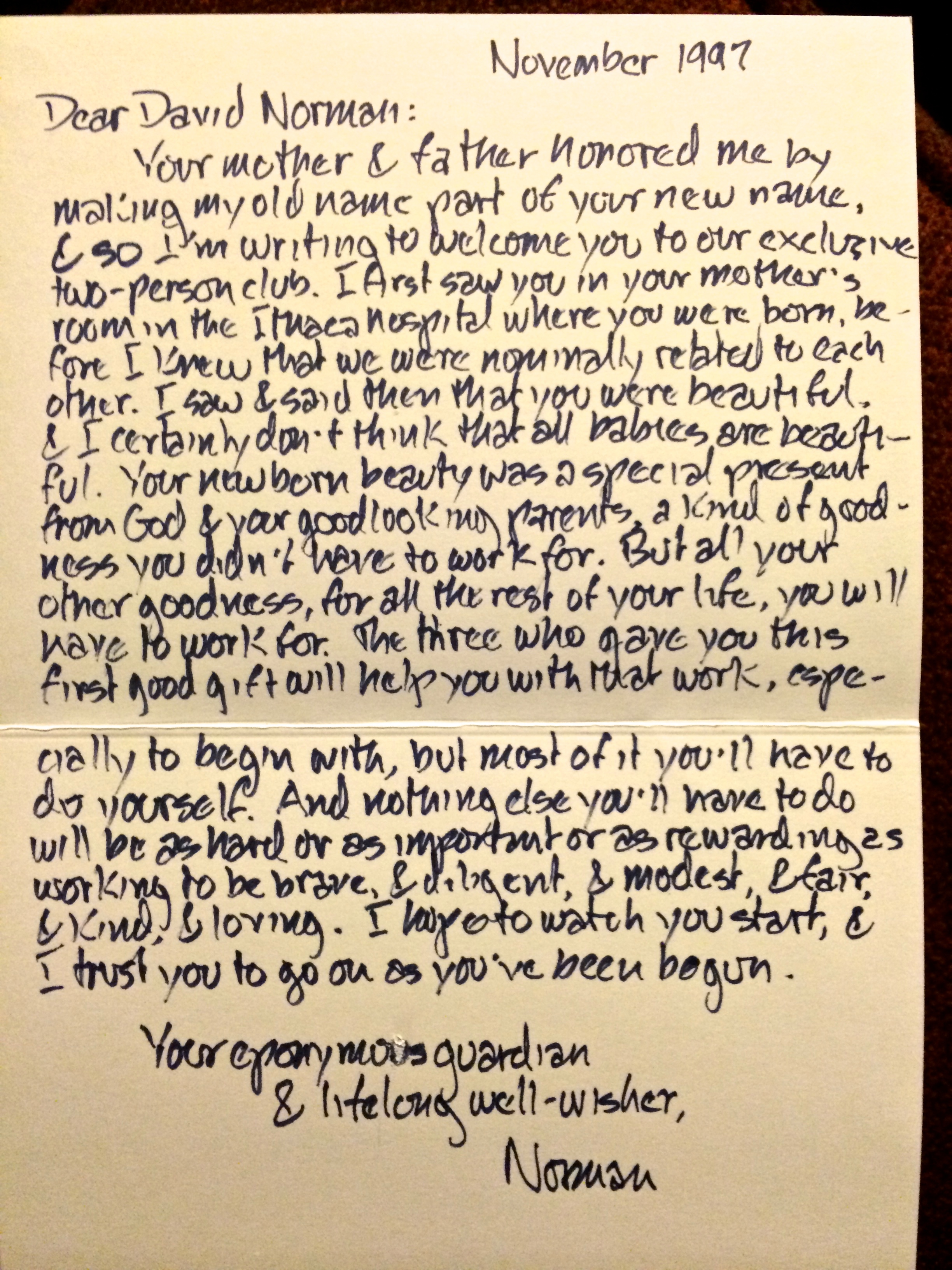 And there you go. If there's anything I hope to have taught David in the past 18 years, it's that

Nothing else you'll have to do will be as hard or as important or as rewarding as working to be brave, & diligent, & modest, & fair, & kind, & loving.

Norman only got to watch the very beginning of David's journey, but I think his trust has been repaid so far. One more year where I get to live side by side with this amazing creature...and most of what's left of my job is to let him go.

Really, the only thing that helps me stand it is the fact that my child is almost 18 years old, and it still takes him two hours to do approximately 10 dishes. Seriously! God love him. I know I do.