I am moving to NYC.

That is, to put it mildly, not a sentence I ever expected to write, even if the move is just for the 2017-18 academic year. Here is a complete list of the places I've lived previously long enough to pay for housing:

Here is where I'm moving, not counting suburbs and such:

Granted, it's no Tokyo or Delhi or Shanghai (whose respective populations are 38.2, 27.2, and 25.2 million, according to this site), but then again, I would go to great lengths to avoid moving to any of those places. So why I am taking the plunge and voluntarily immersing myself in one of the most densely populated areas on Earth?

First and foremost, I'm doing it for luuuuv. Yes, that's right -- the reason I stopped writing my OkCupid posts a year and a half ago is that I was suddenly in the kind of relationship that's supposed to exist only in books and movies. It would have made insanely good blogging material, but Respect for Other People's Privacy won out. Also, I didn't want to jinx it. I still don't! But at this point I spend less time thinking "Surely, one of us is about to die tragically because I'm not allowed to be this happy" and more time thinking "How can any one human being own this many black t-shirts??", so I think I've reached the stage where I can safely write about our relationship.

Here is a photo of us together, for the curious: 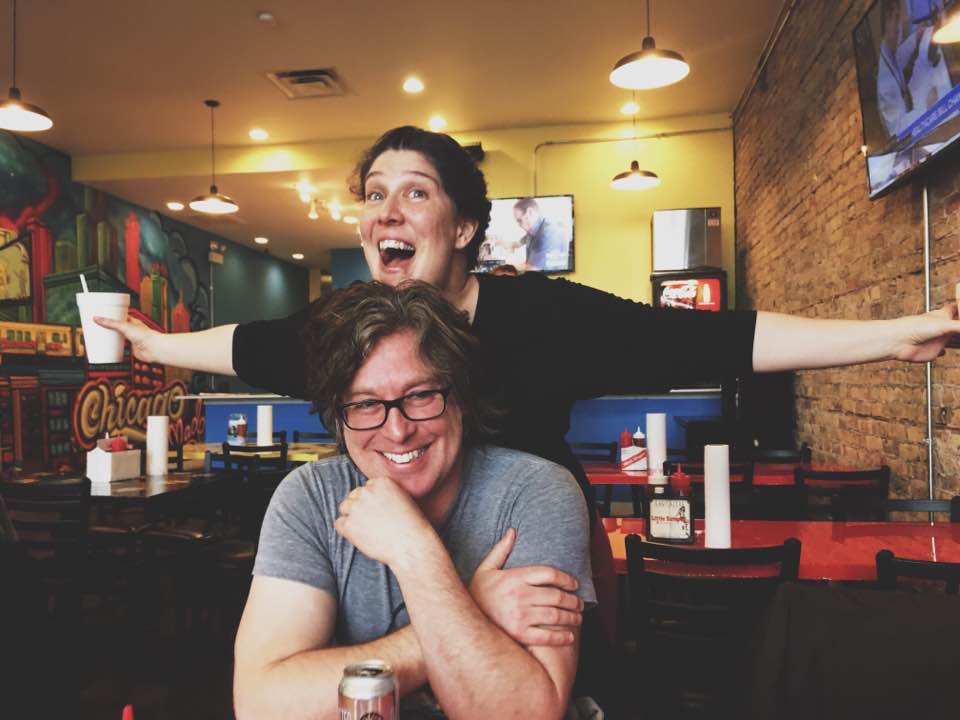 In any event, B (for Beloved, feel free to barf at will) teaches at a college in Brooklyn, NY, and that made NYC seem like the most logical place to go and...

Write a book. I've seen a lot of movies and read a lot of novels, and apparently that's what people do in NYC. They drink coffee and engage in wry, witty banter and ride in cabs and write books. And as it just so happens, I've got a book that I need to finish! (On philosophy in 13th-14th c. women contemplatives -- it's going to break the field WIDE OPEN, y'all, and I'm not even kidding.)

Long story short, then, I'm taking a year's leave from my own college to move to NYC and write a book. Here, for the record, is what I expect to be like a year hence:

I'm currently the kind of person who happily pairs bright red shoes with a purple hemp skirt and a blue yoga top. It's a look that gets me gentle smiles, offers of almond milk, and sincere "Blessings on your journey, sister!" in places like Ithaca and Boulder. I've watched a lot of friends move to New York over the years, though, and eventually the same dimmer switch darkens all their wardrobes. "The city's so filthy," they say, as they pull their trendy black jackets on over their charcoal grey tops and slip into their Fluevogs. "It doesn't make sense to wear color."

At the moment, this excuse sounds to me like Chandler's famous objection to baths ("You're just stewing in your own filth!"), to which Monica's response seemed true and salutary: "Just how dirty do you think I am?!" But I expect that by the end of the year, I'll be shrugging dark beige wraps over my black-clad shoulders and looking askance at people wearing color non-ironically.

I'll probably also be sporting an edgy new hairstyle and/or the glasses with chunky dark wood frames that I imagine "they" must hand out like candy to the intelligentsia as they sip their pour-overs and complain about their commutes. (How else does everyone have different versions of exactly the same frames?)

I also expect to be

Please don't tell me it's the stress and/or the caffeine and/or the misery of breathing the same air as a bazillion other people, because this is one of the things I'm really looking forward to. I've put on a good 25 pounds over the last two years of auto-immune craziness, and in my head, there's just something magical about The City that causes people to become their slimmer selves.

Again -- if that thing is actually "peer pressure plus amphetamines" or "walking up 17 flights of stairs a day because elevator buildings are too expensive", please don't enlighten me just yet. Let me live with the dream where I return at the end of the year saying things like, "I don't know how it happened -- all that weight disappeared like magic as I wandered around the streets of Manhattan, and I'm just so much fitter and healthier again now!"

Finally, by this time next year, I should be

Over the past year, I've spent a lot of time listening to my Beloved and friends carry on conversations that sounded like this to me:

Person A: "Sorry I'm late! The B train got held up because the C-line is under construction, and after 20 minutes of steel drums in the deep, I decided to take the Q to East Methuselah St. and transfer to the P to Beelzebub."

Person B, visibly shocked: "You tried to take the B?? That's only running on the A-line on alternate Thursdays this month! If you didn't sacrifice your goat last Monday, you might as well be riding the D-line!"

[knowing laughter ensues, while I sit there quietly trying to figure out by induction what any of the ingredients listed on the menu might be]

Not only does every New Yorker I've ever met regularly carry on these sorts of conversations, they also have zero sense of humor about that fact. Zero. In fact, if you were, hypothetically, to try inserting a little humor into the proceedings by saying something ridiculous like, "I hear the L-train is going to stop running entirely for two years!", you would be looked at with the sort of shock and horror with which a Midwesterner might respond to a stream of profanities, and which New Yorkers tend to reserve for people who've asked them to bring something home-baked to the next meeting.

(Note for the uninitiated: the L-pocalpse is real, and it is almost upon us.)

In a year, though, I expect I will sincerely engage in these conversations, jumping in with helpful conversational tidbits like, "Why don't you just take the H? It skips every third station past 78th Street if you get on at the far end of the second platform at Melchizedek!" And everyone will look impressed, and I will be included in the knowing transit-related laughter.

Also, I will totally be able to get from 34th and Herald St to Penn Station without getting lost.

I'm looking forward to this.

Let's Lib All the Cupids!