This is a pretty big deal to me. In part, that's because this has all happened so fast (as in, one week it had never occurred to anyone in my department that someone might be laid off, and the next week it was just a question of WHO) and being a tenured full professor is (supposed to be!) the gold standard of job security.

I'm starting to realize, though, that a surprising number of my feels (and it turns out that two weeks is enough time to cycle through every single emotion known to humankind at least once) stem from the simple fact that the last time I was unemployed was 33 freaking years ago.

I was 14, it was 1986, and Top Gun had just come out when I started working as a 'page' at the Ottawa Hills Public Library, shelving books and running errands for the librarians. At first, I would walk or bike to work listening to the "Footloose" tape I'd gotten from the Columbia House Record club on my Walkman. By the time I quit working at the library for what sixteen-year-old-me thought would be the glory of retail sales (ah, how wrong I was!), I was driving a 'vintage' Mercury Ford Zephyr that would stall at intersections if I didn't keep the motor gunning like I was trying to drag race whoever was next to me. 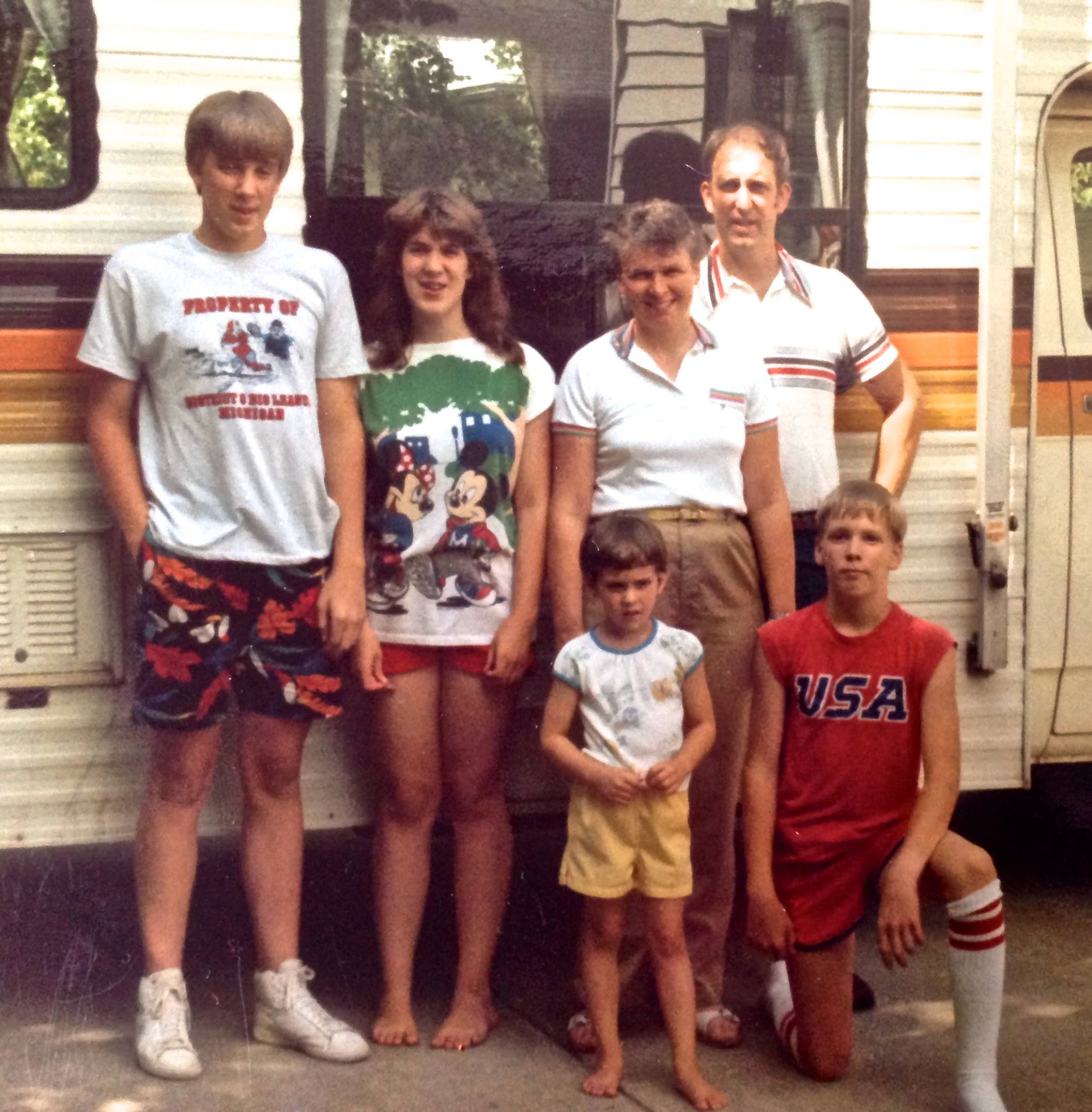 (My family in 1986. I'm the one in the Micky and Minnie shirt looking like I'd stayed up too late reading Sweet Valley High books, which I probably had.)

My stint in retail sales ended two short months later, when it turned out I had no desire to sell anyone anything I didn't think they actually needed. For reasons that remain a mystery to me to this day, I immediately started working as a hostess at the local 24-hour diner Dennys instead. This was back in the days when you could smoke inside restaurants, and the hostess station was right next to the long counter where men (it was always men) would sit for hours smoking and drinking black coffee. My mom made me strip down right inside the door when I got home because I reeked so strongly of cigarette smoke - I think she was half-convinced I'd started smoking myself, but watching what it did long-term to the Dennys regulars is probably what kept me from ever giving it a try. To this day, I associate the smell of cigarette smoke with the stringy regular who kept trying to get me to go see the python he kept in his van. (He even showed me a massive snake-bite on his arm to prove to me that his desire to get me in his van to meet his snake was on the up-and-up. Strangely, this did not make me more eager to climb in.)

Dennys was infinitely more interesting than retail, even if my entire job was to greet people at the door in my kelly-green polyester pinafore dress uniform (which had ruffles on the straps and a striped polyester short-sleeved shirt underneath), take down names during rushes, and bring groups to their seats in an order that didn't 'slam' any of the wait-staff. If I had time, I could bring customers water and/or coffee. The kitchen staff called me "The Hostesss with the Mostest" - and also "Jailbait" once they found out I wasn't 'legal' yet. (I was naive enough not to know what I wasn't legal FOR, which in retrospect was probably a good thing.) I was regularly told I was "too pretty" to have to work; I learned that telling men I had a serious boyfriend was literally the only way to get them to leave me alone.

By the time I was a senior in high school, my regular job was playing piano accompaniment for Suzuki violin group lessons. I often took my ten-years-younger sister to her lessons anyway, so when their previous accompanist quit unexpectedly I started the next week. That remains one of my favorite jobs of all time: I loved the progression of bewildered tots with violins the size of sample cereal boxes to self-confident 8-10 year olds to gawky pre-teens with elbows jutting out in surprising directions. I loved helping tune their violins and hear about their weeks; most of all, I loved playing the piano in a way that supported and encouraged their own playing.

I only quit the Suzuki position when I was offered a prime tutoring position in the philosophy department, my junior year in college. By that point, I was already working a variety of tutoring odd-jobs to pay for room and board, and the addition of the philosophy gig meant I could just baaaarely cover my expenses while working entirely on-campus. (My parents made all four of us kids what I still think was a brilliant deal: they'd pay for half of our college expenses if we paid the other half, and any scholarships we earned came out of OUR half.)

By the time I graduated college, I'd worked at a factory for two summers (to make my half of tuition before my scholarships started really mounting up), spent a summer nannying for five extremely bored girls aged 8-14 (literally the hardest job I've ever had, bar none), been a Tutor Coordinator for the humanities as well as a tutor, worked at the Rhetoric Center, done admin work for the Honors Program, and probably some other gigs I'm forgetting. The summer before I started grad school at the Sage School of Philosophy of Cornell, I spent 40 hours a week doing data-entry - less because I actually needed the money (I'd gotten a sweet outside fellowship) than because I didn't know what to do with myself if I wasn't working.

And that's where I'm finding myself today - I don't know what to do with myself if I'm not working! The creep of academic work is insidious. At first, you're working frantically to get through grad school, finish your dissertation, get a tenure-track job. If/when you accomplish that, the task becomes getting tenure - and then, by the time you've gotten tenure, you're just hard-wired to have work constantly on your brain. I genuinely love what I do + the people I get to do it with, and so almost all my 'vacations' over the past 20 years have involved conferences, or speaking engagements, or visiting fellowships where I'm doing research, or workshops related to projects I'm working on, or...

So now what? If you're an academic, being unemployed can easily just turn into an unpaid research leave: I've already started calling the academic year 2020-2021 my 'panbattical'. I've got plenty of projects to work on and more ideas for what to do next than I could possibly finish in my lifetime. And I'd like to be employed again, which means the more I get done in this in-between time, the better!

At the same time, there's a small but insistent voice inside me asking: what if I don't want to just keep working through this? What would happen if I actually took a break?

I'll be honest - I can handle the thought of not working for, like, a week. Maybe even two weeks? But a MONTH? I start getting panicky. A SEMESTER? Hyperventilating. WHAT IF I DID SOME WORK BUT STOPPED PARCELING MY LIFE OUT IN ACADEMIC TERMS FOR A YEAR? That's just..just...

I honestly have no idea. So much depends on factors I have no control over - when universities start hiring again, what unemployment and the global economy looks like in six months, etc. But I'm starting to gently tug at deeply-rooted assumptions about my worth in relation to work and about what I "need" to do. I'm going to start by giving myself limits for how much I let myself work per day/week, and we'll go from there.

And with that, I say: "LET THE PANBATTICAL LAY-OFF EXTRAVAGANZA BEGIN!"

Medieval Marys for the Modern Day