I had planned to kick off my 'Travel Tuesdays' series with the time I took my 8 year-old to Siberia. But then I realized that was going to establish a bar far higher than I wanted to have to live up to in future posts, so instead I've decided to write about some of the restrooms that have traumatized me around the world.

Obviously, this isn't going to a Karen-esque rant about various times I've squatted over a hole in 'rough' conditions. Because PLEASE. You get what you signed up for in Russian truckstops, rural China, and Michigan state campgrounds. No, this is a post about commodes that have surprised/alarmed me in places like Oxford and Cambridge and - in the most horrifying case of all - GERMANY, the land of cleanliness and efficiency.

Let me begin with the splendid WC against which all others shall be measured. 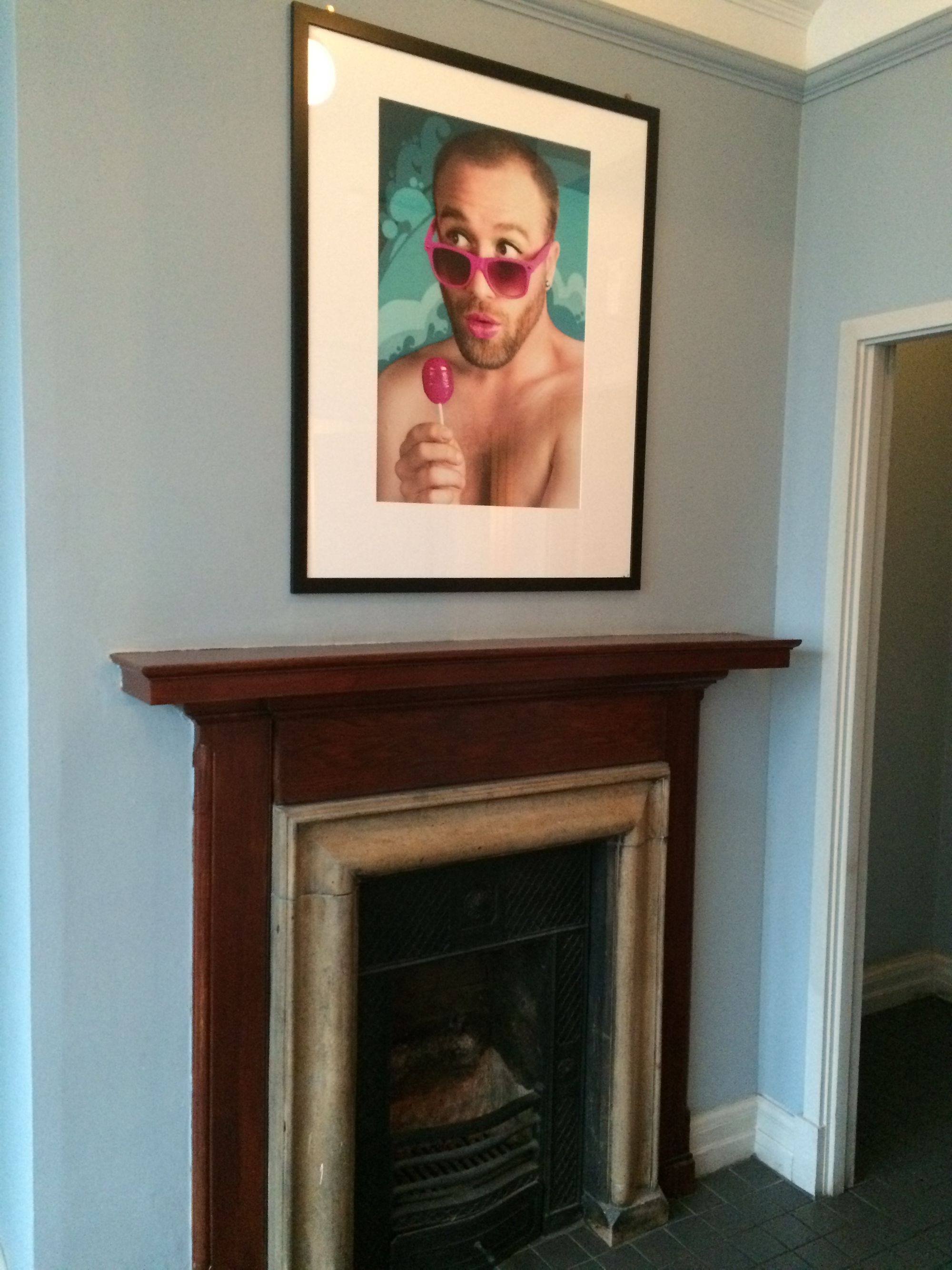 This is a photo of the Victorian fireplace (and bizarre choice of art) in the WC of a pub in Cambridge, England. The pub itself was not particularly large or fancy, so nothing had prepared me to climb the stairs to find a spacious, gracious room with not just a (to all appearances) working fireplace but also two gigantically tall windows and what looked like solid mahogany stalls that offered total privacy, being their own spacious, self-contained little rooms. After availing myself of one of the said little rooms, I then got to wash my hands in a spotlessly clean sink whilst gazing out over the quaint shops and streets below. I've stayed in hotel rooms significantly smaller and less grand than this bathroom. If Andy hadn't been waiting for me back downstairs, I would have curled up with a book and stayed a while.

Having established this benchmark, in which the weirdest feature was the picture hanging over the fireplace, let's move on to another grandly-scaled WC - this time, in a guestroom in Oriel College, Oxford. Everything about the bathroom was tip-top...except for the fact that the bathroom was on the ground floor and the windows - which took up the entire wall next to the commode - opened directly onto the central courtyard in such a way that someone sitting on the commode had a distressingly high chance of locking eyes with people walking past on the path right next to them. (Seriously, the path was maybe two feet away.) 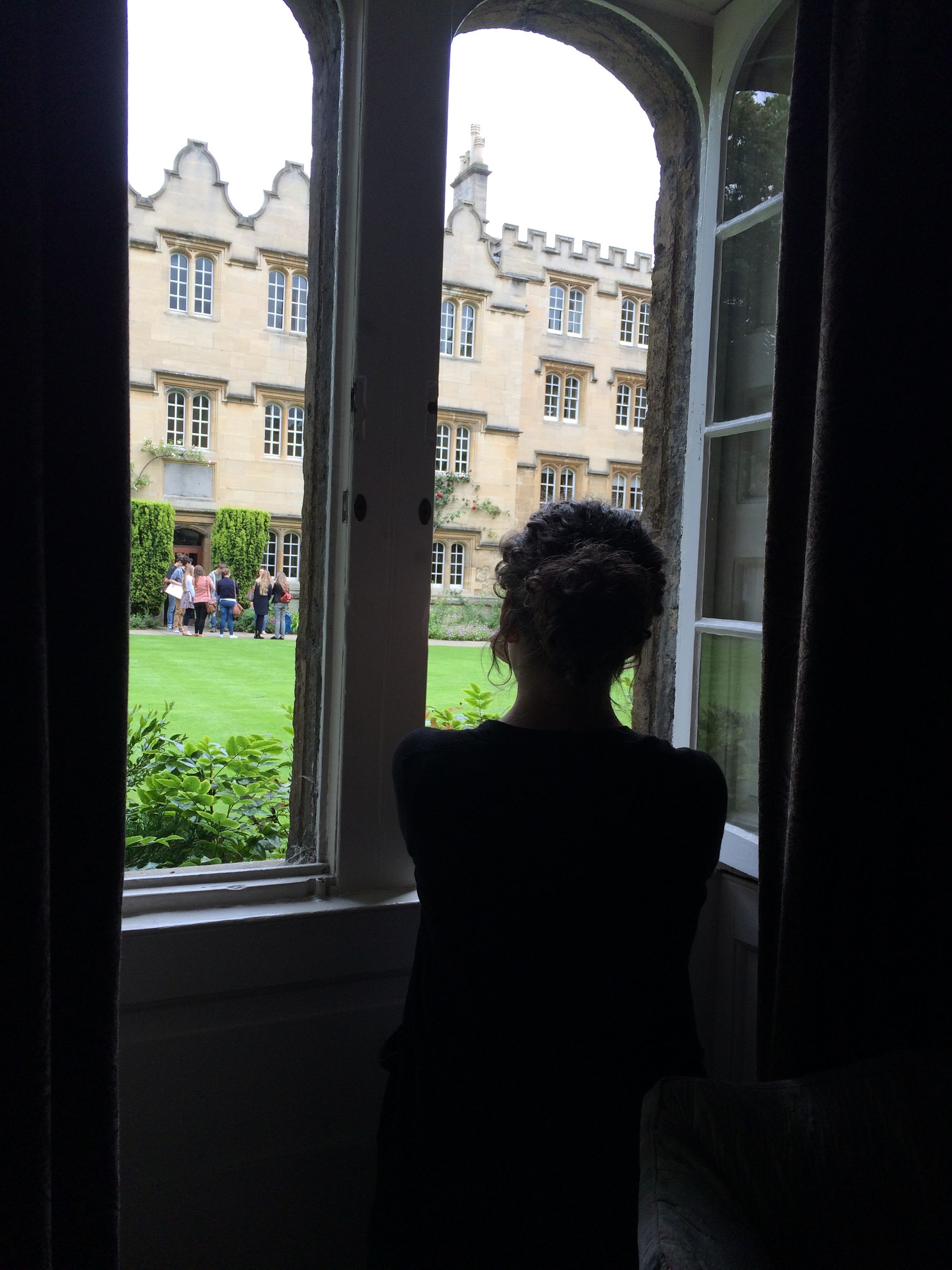 This is my friend Amy standing in front of one of the windows, to show how very clearly you can see people standing all the way across the quad - and vice versa. The WC as a whole was marvelous, though - spacious and full of mostly working plumbing. Most importantly, using it in no way required you to risk your life.

"That's a pretty low bar for a toilet, Christina!" you might be thinking. AND YET! The next three toilets demonstrate that the existence of such a bar cannot be assumed.

The standard way in which toilets require you to risk your life involve stairs and/or unsafe electrical wiring. The two main variations on this are the "going up alarmingly rickety stairs to meet your doom" type situation vs. and the "heading down worryingly uneven stairs into an abyss of dripping water and flickering lights" type situation. The former at least tend to have signs saying, "Please be careful on our historical and uneven staircase!" The latter - which seem to be the particular purview of the Brits - have at most a "mind your head!" plaque that doesn't mention the potential for electrocution at all. 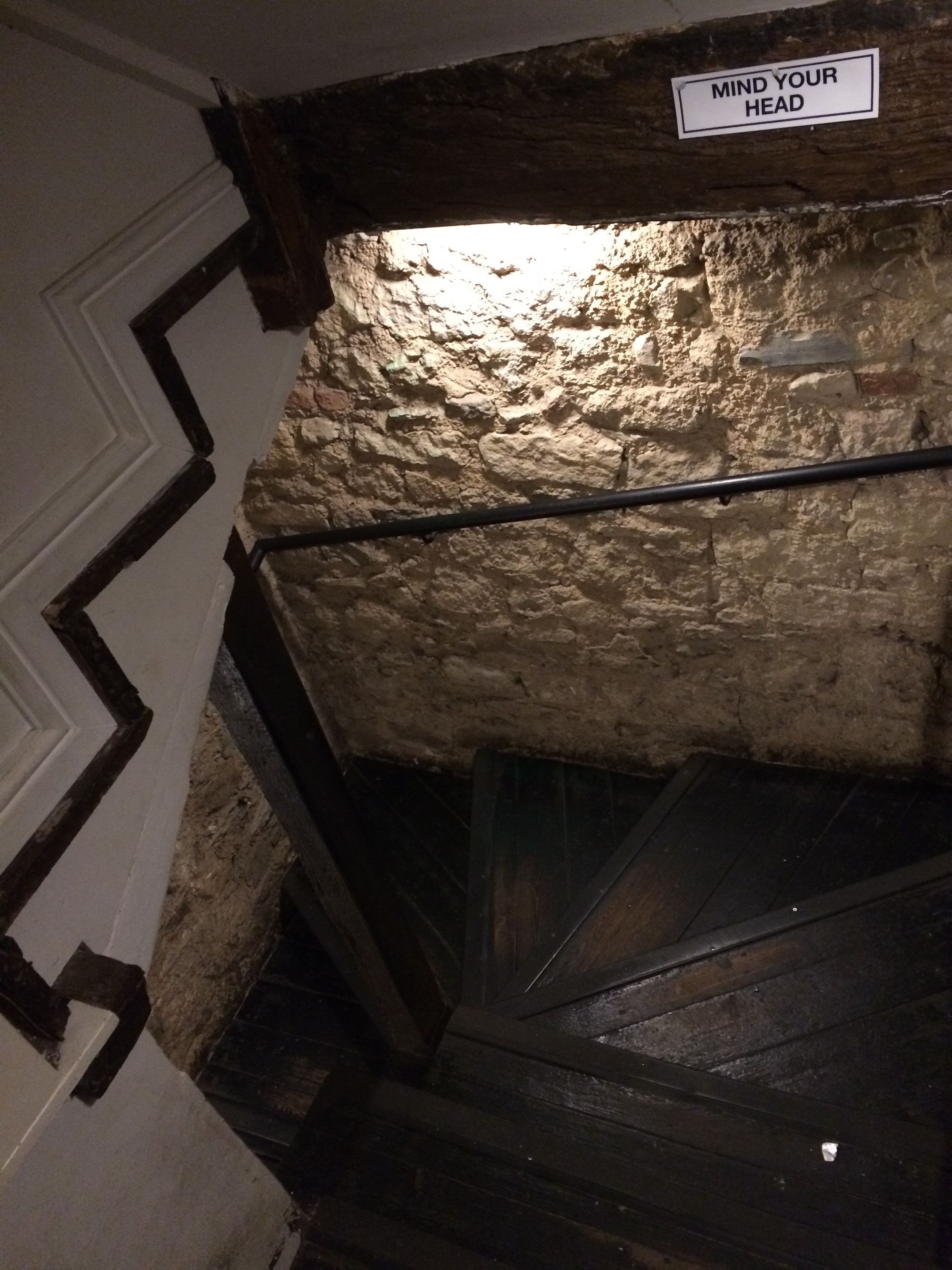 (Once you got to the bottom of this particular staircase, you just had to continue through a short maze of dripping pipes and exposed electrical wires to find the tomb-like loo. And then find your way back out again.)

I wasn't joking when I said the second type of 'standard' risk-your-life-for-the-toilet situation seems to be the purview of the Brits. When I started watching the re-boot of Doctor Who back in the early 2000's, I was struck by the repetition what seemed like an annoyingly lazy plot device where someone would wander towards certain danger down a long, dark, deserted corridor with pipes dripping and hissing and construction plastic draped across side passages. Then I actually spent enough time in the UK to realize that you could probably get a Brit to head down the most threatening underground corridor in the world if you tell them that's how to get to the loo. "Beats the way to the Radcliffe Camera WC!" they'd probably say as they passed a pile of what might be mannequins or might be corpses.

Here is the Radcliffe Camera: 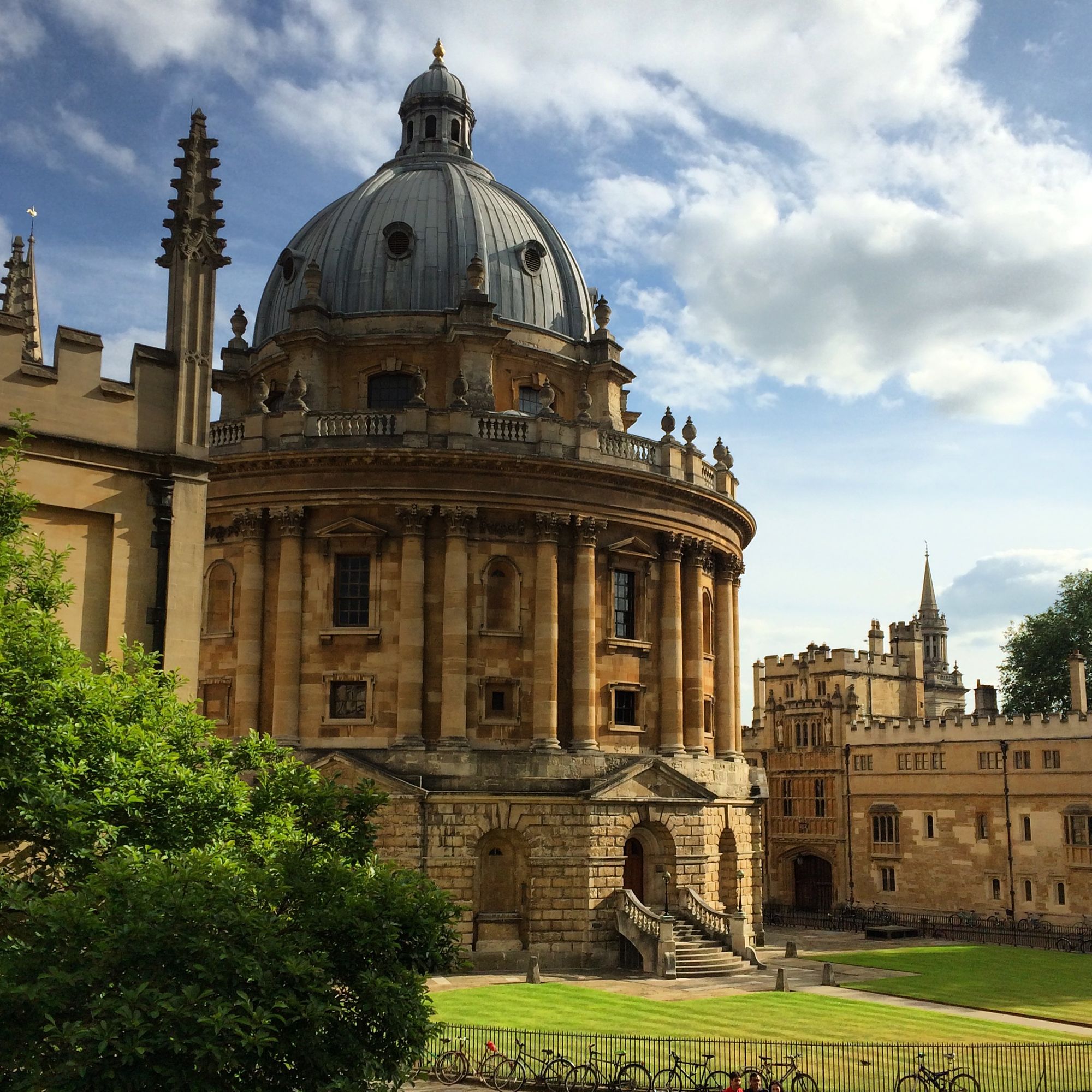 And here is what you see when you open the door that claims to lead to the loo in the Radcliffe Camera: 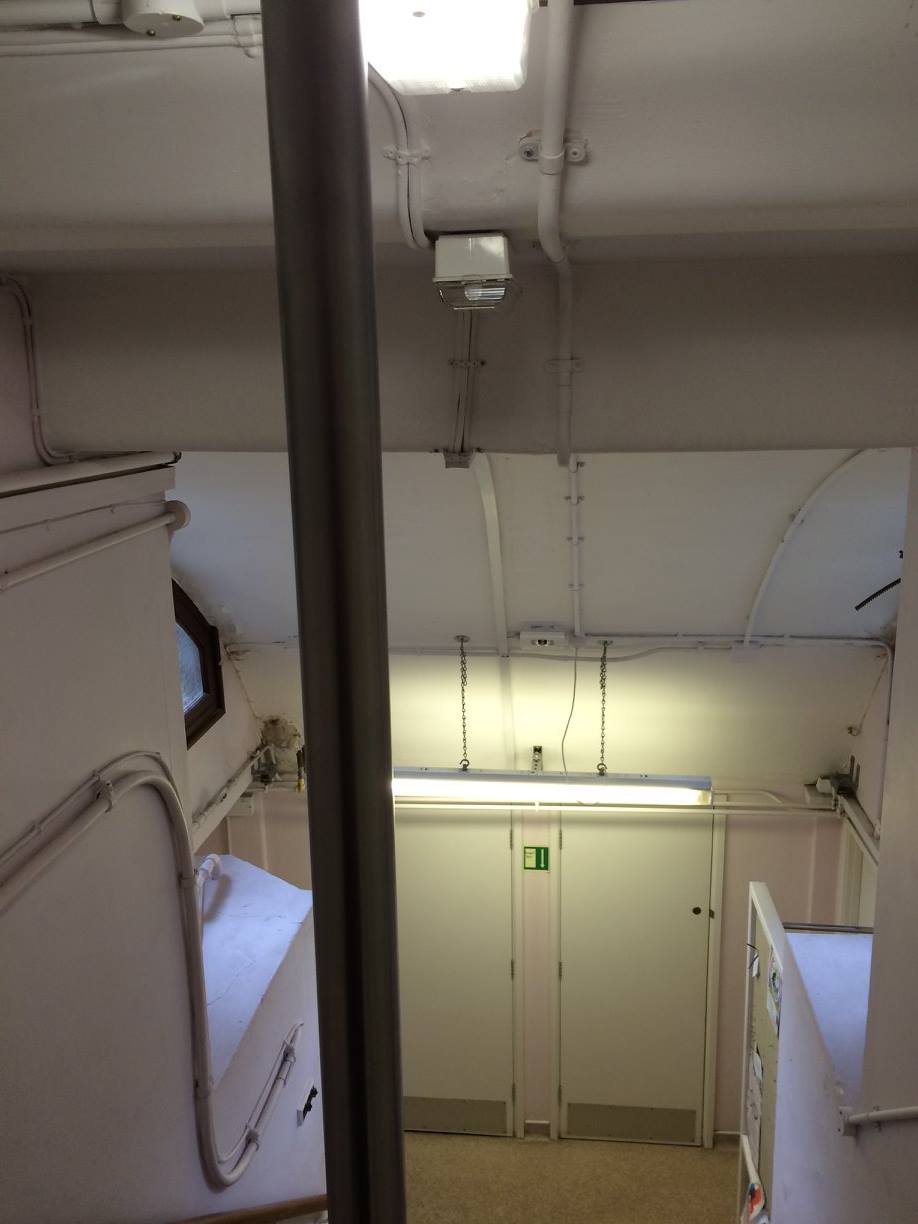 Note: the actual WCs are not behind the two doors you can see around the metal pipe at the bottom of the stairs there. Nope. They're actually down little corridors to the left and the right.

If this was as bad as my toilet-using travel experiences got, I probably wouldn't bother writing up a whole post about them. But remember when I said there was a 'standard' way in which toilets require you to risk your life? A trip to Germany taught me that there was another possibility which so traumatized me that I don't even have a photo of the toilet in question because I literally ran away from it and didn't look back.

It was beautifully sunny summer day; Andy and I had been at a conference in Switzerland and were driving to Berlin to meet up with his parents (who live there). Along the way, we stopped at a rest park off the German autobahn. There were trees, grass, flowers, and what seemed like perfectly ordinary facilities divided into little private cement block rooms, each with a metal no-frills toilet, sink, and automatic hand dryer. I sat down and began happily peeing (we'd been on the road for several hours) when suddenly a panel behind the toilet opened and THE TOILET SLID OUT FROM UNDER ME and back into it, where a machine began spraying it vigorously with water and sanitizing liquid. I remained frozen in place like a startled possum, unsure of the proper protocol in this situation but absolutely confident that I was not supposed to be peeing on the cement floor, which is nevertheless exactly what I was doing.

Before I had time to recover my wits, the toilet slid out from the wall and back underneath me. For a brief second I thought the world was safe again, and I began to settle down. BUT NO. The toilet waited just long enough for me to have this thought and then it pulled BACK INTO THE WALL, where the whole cleaning process (which at this point involved vigorously spraying not just the toilet but also me with several sorts of unidentifiable liquids) began again.

Until that day, I was the sort of person who NEVER used the bathroom without washing my hands afterward. But on that day I became the sort of person who ALMOST NEVER uses the bathroom without washing my hands, because I was so terrified that the entire room was going to lock down and start heating up like the self-clean cycle of a stove that I literally ran from the room and back to the car. In fact, I managed to get the car started and to exit the parking lot before Andy (who, thank goodness, had already finished his business and was ready to go, because I'm not sure I would have waited for him) could ask me what had happened.

Ever since that day, I've felt like Descartes at the beginning of the First Meditation, when he talks about all the things that he had taken as certain that he has subsequently learned are falsehoods. Is 4 a prime number? I'M NOT SURE. I mean, TOILETS CAN RETRACT INTO WALLS WHILE YOU'RE USING THEM. So, maybe?

The moral of the story, my friends? TRUST NOTHING. If even TOILETS can abandon you when you need them most, NOTHING IS SAFE.