When my only child was 8, I took him with me to Siberia. We're talking just the two of us and backpacks in off-the-grid Siberia - Olkhon Island in the middle of Lake Baikal - as opposed to a guided group tour of, say, Irkutsk, which is not only a historically interesting city but even a relatively well-known place name, thanks to the game of Risk.

In my defense, IT WAS SUMMER!

(Spoiler alert: my child survives. In fact, he's just graduated college and seems to enjoy telling these stories as much as I do, so he clearly wasn't too badly traumatized by either the night we spent in the super-sketchy 'Oriental Exchange Training Facility' or the plane crash. Emphasis on the 'too'.)

It was 2006, and I had been invited to speak at a conference at Peking University in Beijing at the beginning of July. The conference organizers were covering airfare and lodging for me, and David was still young enough that he got half-fare or whatever deal airlines used to offer to convince people to take their children on long trips with them. (Just typing that makes me mist up a little. Remember airlines? Trips?! DEALS!?!) So I decided to take David to China with me, and then - as one does - to continue on to Siberia and Outer Mongolia. Because you know what connects them? The mother-forking Trans-Siberian Railway, that's what! 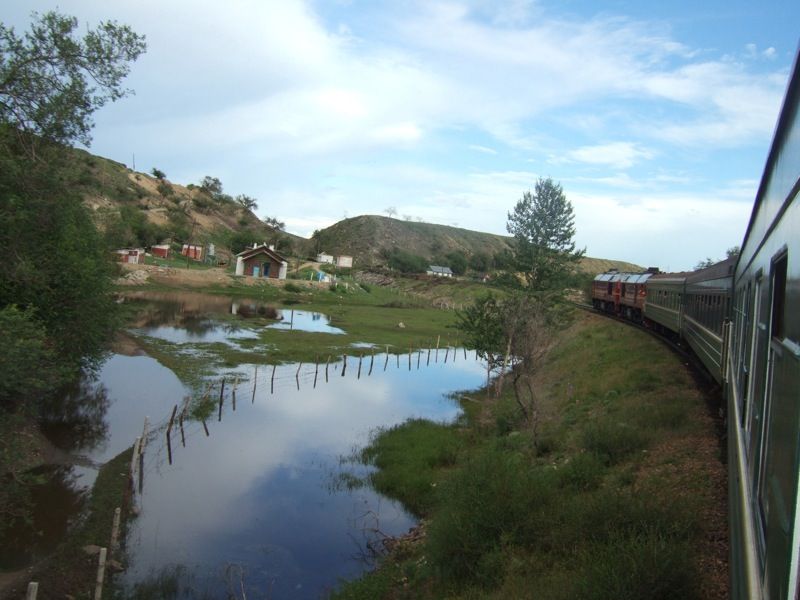 (Second spoiler alert: we got to ride on the Trans-Siberian Railway!!! This is a photo I took out the window somewhere between Russia and Mongolia.)

I am nothing if not thorough in my pre-trip research. It's actually one of my favorite things to do when stressed and/or procrastinating: background research for an upcoming trip. (In fact, some days I still open my United app just to stare sadly at the 'no upcoming trips' page.) And when you're taking not just yourself but your adorable eight year-old to Places Unknown, you double down on making sure you have all the relevant information ahead of time.

I knew, for instance, that there was exactly one flight per week from Beijing to Irkutsk, and I had those tickets literally in hand before we left the States. I had information in writing about which bus to catch and when from Irkutsk to our hostel on Olkhon Island. I also knew that if we wanted tickets on the Trans Siberian Express to Ulaanbaatar, we needed to buy them in person at the international window of the Irkutsk train station. I even had the appropriate train number and name written down in Cyrillic, just in case. I had confirmations, contacts, copies of our passports, and various forms of currency stashed in David's backpack as well as my own.

What I didn't have was a single person I knew over there, or even the most rudimentary knowledge of Russian. I could say "Yes," "No, "Please," and "Thank you". (My mother - who has raised worrying to a story-telling art form - was sure that I was going to fall off a cliff, leaving the bereft David to wander the Russian taiga with only his memories of my gruesome death to keep him company until he eventually starved to death. My attempt to assure her that - knowing David - my child would undoubtedly be rescued by friendly wolves soon after my death and rediscovered a few years later to great fame and fortune did not comfort her as much one would have hoped. In retrospect, I probably shouldn't have granted her my demise so quickly.)

In any event, my story really begins on a hot, humid night in the Beijing airport, because that's when the one flight to Irkutsk per week departed: Wednesdays at 11:55pm. 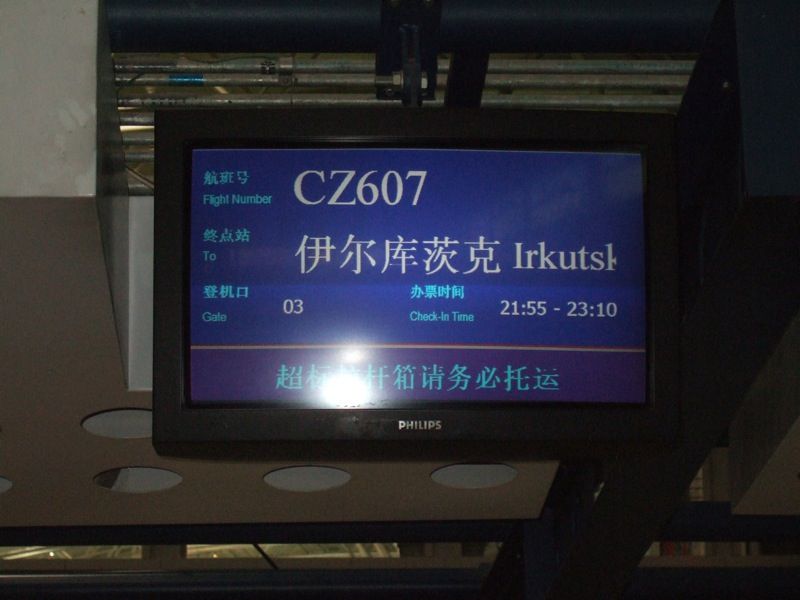 David and I had no luggage other than our backpacks, so we were immediately out-of-place in the sea of Russians surrounded by enormous suitcases straining at the seams, a staggering amount of comforters and pillows, and box after box of electronics - TVs, radios, stereos - every single piece of which was duct-taped within an inch of its life. And that's the entirety of who else was on the flight: two bus-loads of Russians. (Why measure the Russians by bus-load? FORESHADOWING, my friends. Foreshadowing.)

Now, I wouldn't want to stereotype an entire people based on this group's reaction to what happened next. But I am going to go out on a limb and say that the whole experience would have been rather different if it had been a planeful of Americans. Because here's how things went down:

First, we waited. We waited for several hours in the terminal, finally boarded the plane - and then waited for another hour. By now it's 3am.

Next, someone came on the loudspeaker and said something I couldn't understand, at which point everyone on the plane sighed, stood up, and started grabbing their things and exiting the plane. (The 'everyone' included me and David, since the body-language for "this flight has been cancelled" turns out to be quite similar across cultures.) We all traipsed dejectedly back into the terminal, where they brought us to passport control and proceeded to re-admit us back into China, one by one by one.

This is the point at which cultural differences become highly relevant. Because the next thing they do is lead us all out of the airport and start loading us into two buses with absolutely no explanation. And the Russians just...go. I, by contrast, have been raised on a steady combination diet of rugged individualism + nightmares about the Twilight Zone episode where people are climbing into the spaceship only to find that "How to Serve Man is a COOOOKBOOOOOK!", so I'm looking around desperately for someone - anyone - who can tell me WHAT IS HAPPENING. Finally I'm told that the buses are taking us to a hotel where we'll sleep for the night. It's 4am by now, so that's good enough for me. We climb on one of the buses, and we drive off.

I'd just assumed they were taking us to a nearby airport hotel...but we're still driving fifteen minutes later. And then thirty minutes after that. And then an hour and a half after THAT.

David is sound asleep on my lap, I'm starting to wonder whether it's more likely that they're bringing us to a work camp or busing us all the way to Irkutsk, and the sun is starting to rise when we finally turn down a dirt road and start bouncing past what are clearly military barracks. Ten minutes later, we pull into the drive of a squat cement building guarded by four uniformed men with semi-automatic weapons. As we climb off the bus, we're led into the lobby of the building, which is helpfully labeled "Oriental Exchange Training Facility." (I have no photos of this part of the trip not because I didn't think to take any, but because I wanted to keep my camera. And also my freedom. That said, I feel like this place was definitely training military intelligence officers to go undercover as hotel staff.)

As we stand there - and again, NO ONE ELSE SEEMS TO BE FREAKING OUT ABOUT THIS IN THE SLIGHTEST - they start calling out names and handing people keys. Finally, I hear "Van Dyke!" and we trudge upstairs to room 303. The room is missing part of the wall. You can literally see through it to the people performing military drills below. The sheets are worse than dubious (I can deal with holes, but not holes and stains of unknown origin), so we just crawl on top of the covers and fall asleep instantly.

Two hours later, the phone rings. I pick it up to hear "WE GO NOW!" - a bit abrupt as far as wake-up calls go, perhaps, but at least in a language I understand. We stumble down the stairs and are herded back onto the buses. A snappy fifteen minutes later, we're back at the airport. They hand us all new boarding passes and soon we're on a plane and in the air. 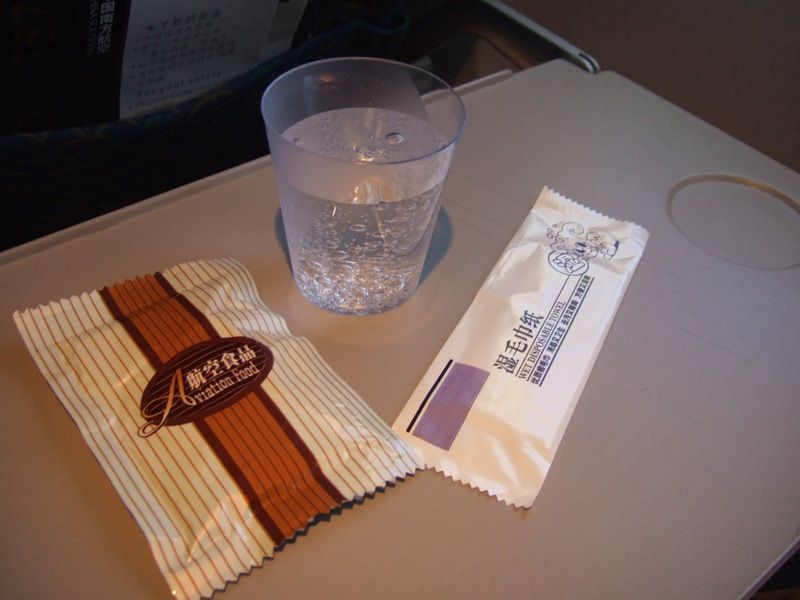 (This is the photo I took when we finally got some food and potable water. Those seven peanuts tasted AMAZING, and we basically bathed in the sanitizing wipes.)

At last we touch down in Irkutsk ... only to casually taxi right past a plane that 1) has clearly crashed, insofar as half of it is charred and one wing has mostly fallen off and 2) has crashed recently enough that it's still smoldering. In fact, it turns out that this is why our flight the previous night had been cancelled: they needed to get this other plane that was still on fire far enough off the runway for us to land. (There was only the one runway.)

Still - there we were! We'd made it to Siberia. Our bus to Olkhon Island had long since departed, we had nowhere to stay in Irkutsk and no idea how to get from there to Lake Baikal, but we were on Siberian soil.

Having gotten this far, I've realized I'm only at the halfway point of 'How David and I Got to Olkhon: the Saga'. And the second half is at least as good as the first half - we haven't even met the British Private Investigator in the basement restaurant yet! - so I'm going to save it for next week's Travel Tuesday post. While you wait, please enjoy this picture of David reading a book while waiting to go through passport control in Irkutsk. Also, I'd like to say again that I have no idea why my mother thought anything might possibly go wrong with this venture. 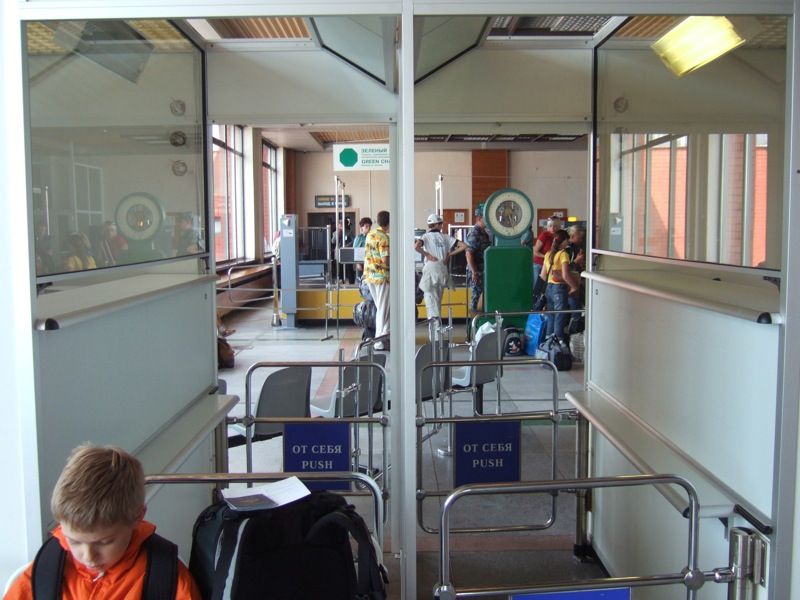