It was 9:30am, mid-July 2006, on a blessedly cool and sunny day in Irkutsk. David and I were standing in front of the Angara hotel staring at a small fleet of unmarked buses, me tightly clutching the paper containing the information that our mysterious English ex-pat private investigator had wrangled from our Russian contact, David tightly clutching my hand. This was supposed to be the least complicated part of the trip - all we had to do was catch the bus, ride it to the ferry to Olkhon Island, take the ferry, and then ride another bus to the Sunny hostel - but the competition for complications had been high so far and indeed, this leg of the trip really rose to the challenge.

I'd been imagining that a single bus would pull up, we'd show our identification, pay our fare, and settle in for the 6-hour trip. The tangle of buses in front of me was bad enough, but the fact that NONE OF THEM SAID WHERE THEY WERE GOING was enough to send even me into a small tizzy. Sticking my head into random buses and asking "Olkhon Island?" was not helpful - apparently, I either wasn't saying it right or none of the people I asked were going there/felt like helping me. There were a few men with clipboards, though, who seemed to be directing people to various buses, and so I waited until one of them finally acknowledged my presence. (I had not yet learned the lesson that one does not queue politely in Siberia - one pushes and shoves towards the front of the line and tries to yell the loudest. I learned this from some old ladies in a bread store later.) The guy helpfully checked my passport against his list, shrugged, and wandered away.

If years of teaching intro philosophy to utterly uninterested students has taught me anything, however, it's that you can crack even the most blasé façade if you apply enough persistence (and don't use phrases like 'blasé façade). Like Socrates basically said in the Apology, "Am I annoying you? Awesome. Now you're paying attention, and we can find the unchanging, eternal truths together." Or in this case, find which bus my 8 year-old child and I are supposed to be on. And so I pursued the clipboarded gentleman like a gadfly until he finally sighed and called over the other clipboarded gentleman, and after a brief conference between the two of them with much reference to many sheets of clipboarded paper, David and I were ushered to seats on a bus that at least two other passengers also believed was going to Lake Baikal. (I know this because with basically every step down the aisle I was saying, "Baikal? Olkhon Island?" and finally a German-speaking woman took pity on me and said, "Ja, Baikal.")

This level of certainty may not seem impressive to you as you sit at home happily sipping coffee (I'm imagining that it's coffee because coffee was the single thing I wanted most at this point in the trip and I hadn't been able to get it ANYWHERE), but it was far more than I'd come to expect. David and I had both settled into our books already when a young woman with long dark hair pushed down the aisle, calling "Van Dyke? VAN DYKE??" with increasing urgency. This - finally - was Lana, our 'contact' in Irkutsk who was supposed to be helping us get to Olkhon. She seemed quite amazed that we'd gotten ourselves on the bus without her assistance (whereas I was all "DUDE, the bus was supposed to LEAVE ten minutes ago - I wasn't going to WAIT"), but she assured us that this was the right bus and then took our fare and left just as the bus turned on and pulled out.

A few hours into the Siberian countryside later, we stopped here: 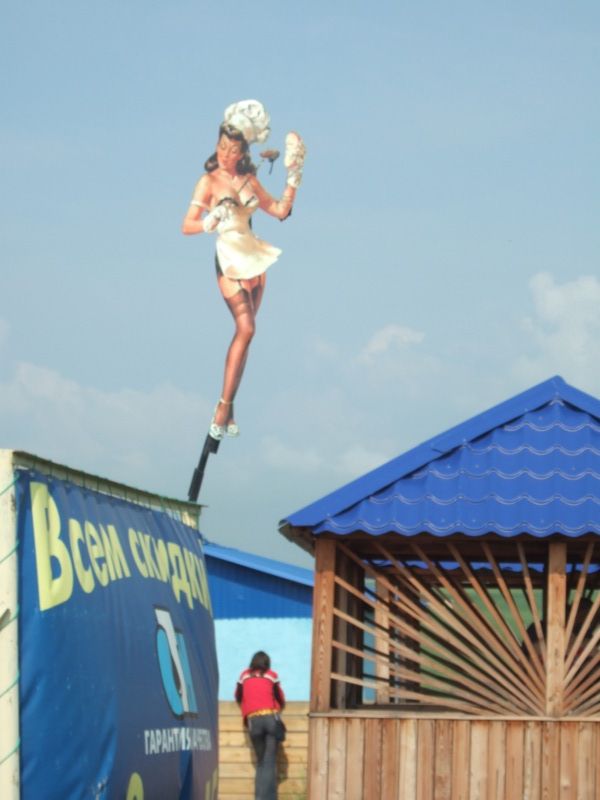 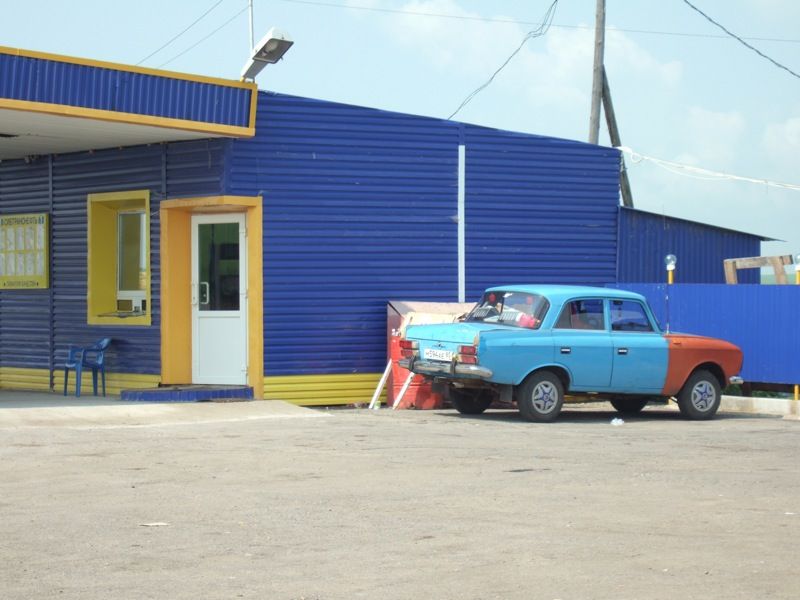 Everyone got off the bus and went to use the 'toilet' (a term I use very loosely for what was actually a hole jackhammered into a concrete slab over a latrine pit) and/or buy lunch. David and I were starving, so we joined the crowd and bought some unidentifiable things via the "point and nod" method common to tourists the world over.

And then things got interesting again. Just as David and I had gotten settled back into our seats, a man got on the bus and spoke in Russian for a minute or two - at which point exactly HALF of the people on the bus grabbed their things, got off, and then climbed on another bus.

Which half did David and I belong with?! It was completely unclear: Lana hadn't said anything about transferring buses, but then she hadn't said anything about a lot of things. I found the German-speaking woman who'd given me the "Ja" earlier and she (while gathering her own belongings) indicated that the OTHER bus was probably where we belonged. For me, this was the diciest moment of the trip. We were now hours outside of Irkutsk, internet, and infrastructure. I had no idea where in the Siberian taiga we were, and no idea where either bus was going. At least we had a bunch of Russian money, American dollars (stashed in ziplock bags in various places on David's and my person), and each other. We got off the bus Lana had put us on and climbed on the new bus.

Fortunately, it was a relatively short period of time before the bus stopped again - this time, at the ferry to Olkhon Island. It's amazing the thrill of victory you can experience from doing something completely mundane. Getting on that ferry felt like nothing less than TRIUMPH. 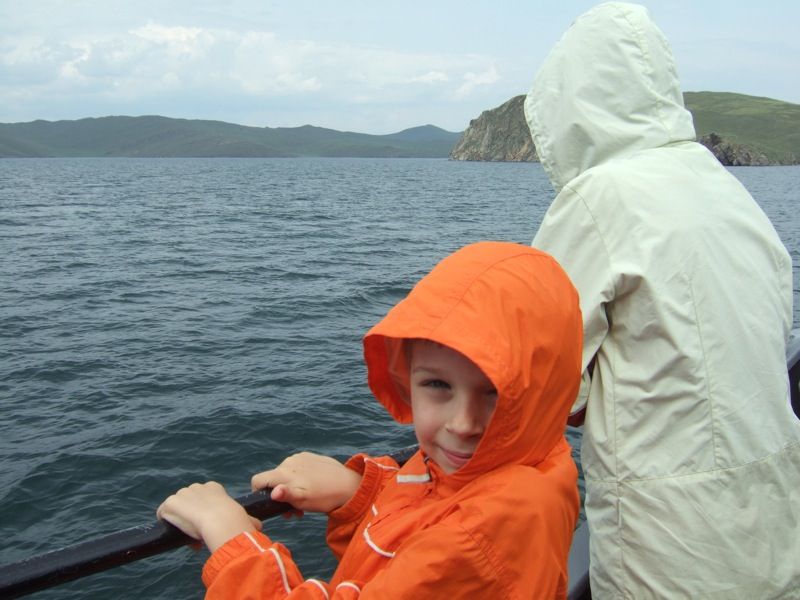 (David was less excited about our successfully getting to the ferry - since as far as he knew, I had everything under control the whole time - and more excited about being on a boat.)

Once we got to the island, everything became simpler. There was one other child about David's age on the new, much smaller bus, and his mother - who was clearly going on vacation with another woman who looked like she might be her sister - caught my eye and asked where on the island we were going.
(I mean, that's probably what she asked? I don't know, of course, because she asked me in Russian and (as one does) I had taken my only child with me to Siberia without actually knowing any Russian.)

In any event, we figured out through sign language that all of us were going to 'Sunny' Hostel. (I have no idea how I would have conveyed the name of the hostel if it had been something like more abstract like 'Anna's Abode', but I'm sure we would have managed.) The mom conveyed that we should stick with them, and an hour or so later, we all got off the bus. David and I checked in, paid for our meals for the week (three meals a day handed to you on a tray at a set time through a small window, like at summer camp or prison), and were shown to our room in one of the pine cabins. 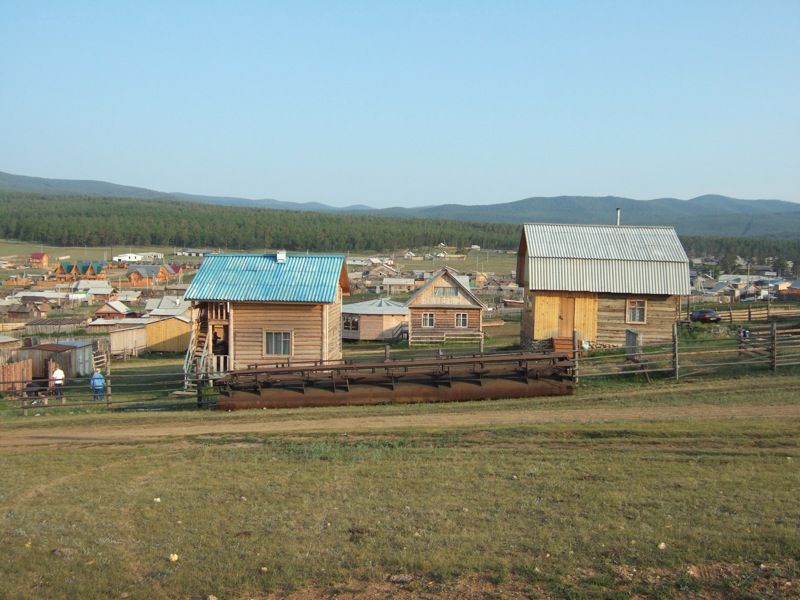 FINALLY. We had arrived.

It was amazing, even if there was no running water on the island, the toilets were outhouses, and the shower looked like this: 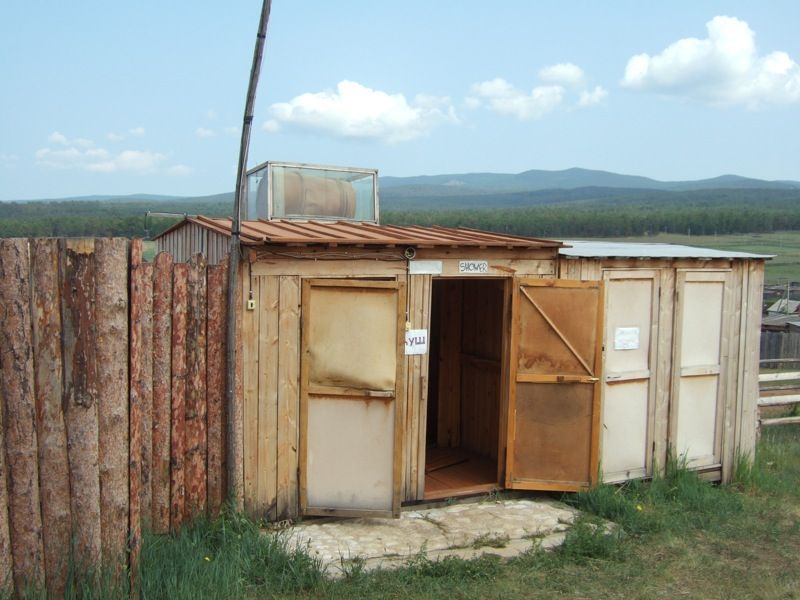 (I never got dirty enough to test whether the rusty drum of water actually made for a good shower - the lake was right there, and it wasn't any colder than Lake Superior in July, which is to say your feet went numb instantly when submerged, but not in a bad way.)

After dinner, David and I explored the island near our hostel. It was perched towards the edge of some rolling hills that then fell steeply down to the water, and there was one hillside where lots of people had written their names with rocks: 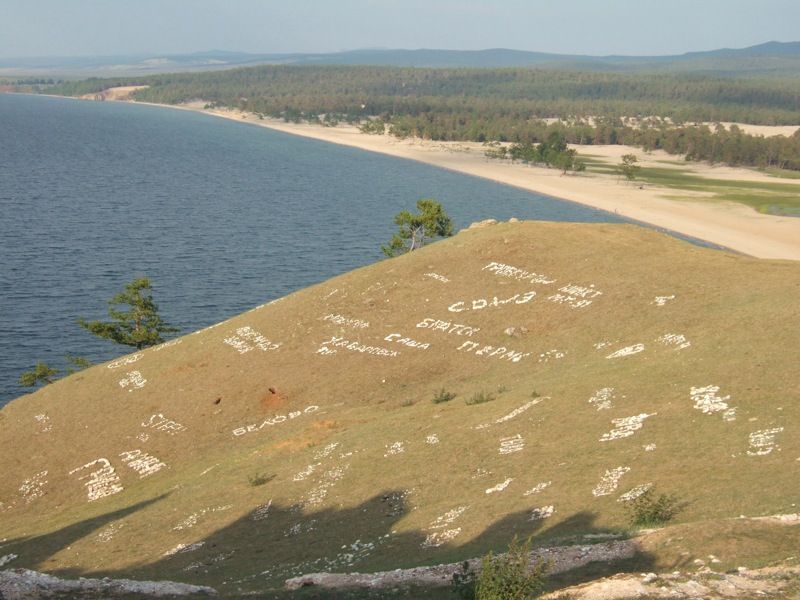 Also, there were cows everywhere. The fences around cabins were clearly meant to keep the cows out, not in, as they clearly had the run of the island. 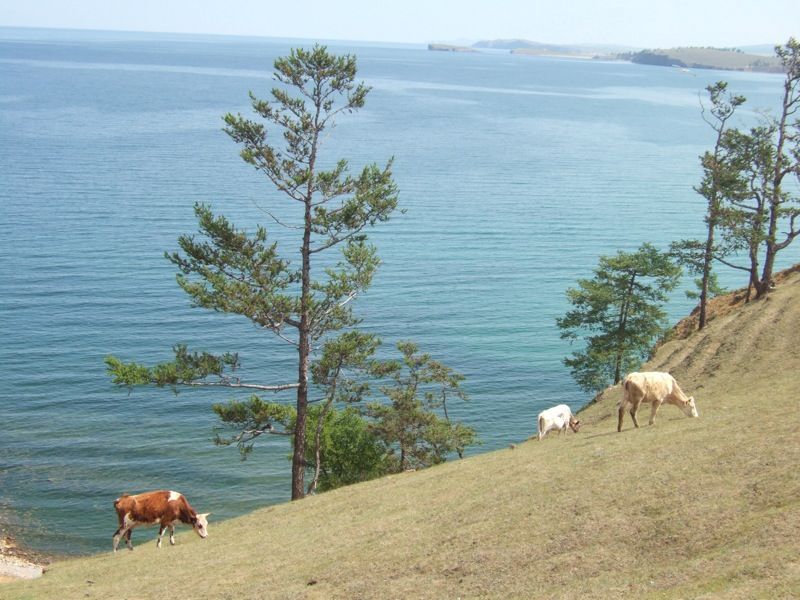 So David and I made our way down to the beach, where he made a sand version of the Forbidden City in the sand and I enjoyed having survived the journey. 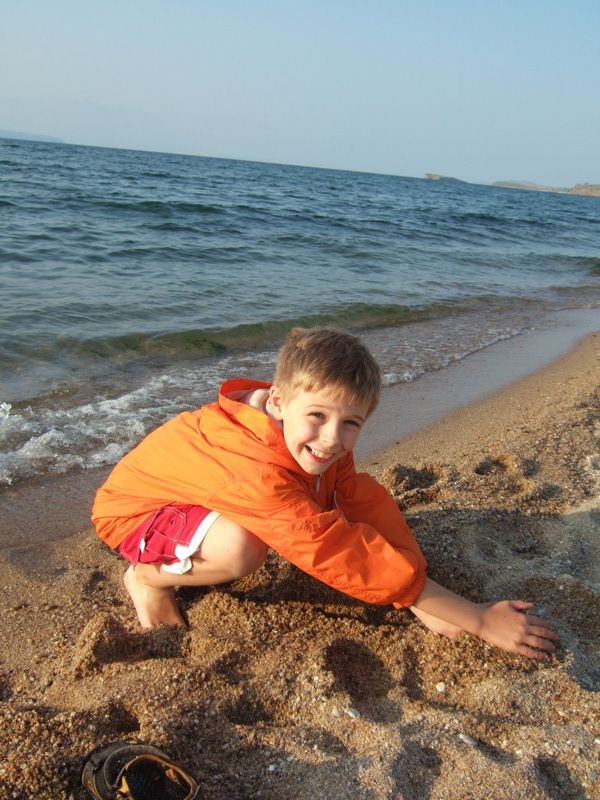 If you've ever seen an overview of the Forbidden City, this is actually a pretty decent model: 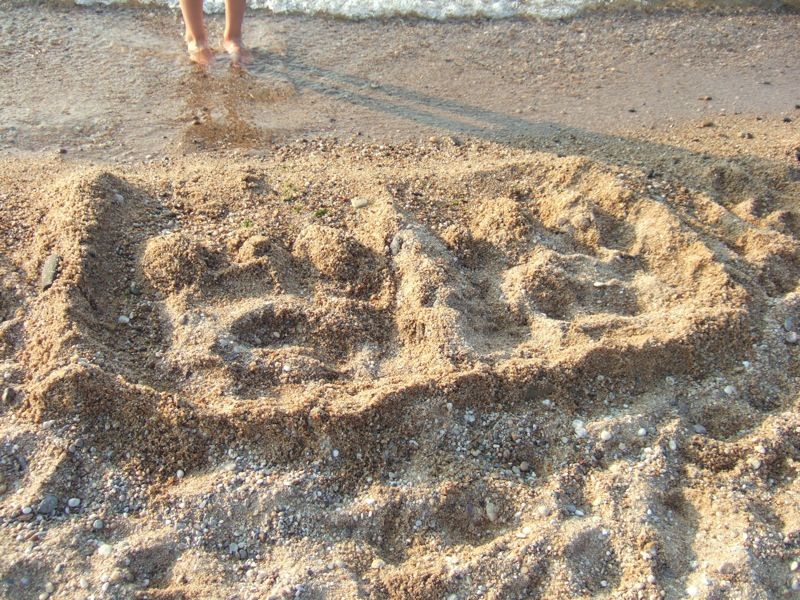 And here's the happy - and hilarious - end to (this part of) the story: as we started wandering back up the hill again to find a good place to watch the sun set, we heard voices call out "Helllllooooo! HELLLOOOOO!!!!!" It was the women who'd been on the bus with us, waving us over and gesturing to me to sit down. The mom (whose name turned out to be Lena) told her son (whose name turned out to be Roma) something that clearly meant "Go play with this kid", and David - who hadn't had someone of his own age to play with in two weeks - ran off quite happily with Roma to play with a set of plastic bow and arrows. Meanwhile, the other woman (Tanya) pulled out a bottle of vodka, three shot glasses, salted cucumbers and cold fish dumplings, and we commenced getting to know each other. We shared our ages (via the calculator on Tanya's phone), marital statuses (via significant pointing to ring fingers + "and?" gestures), and where we were all from ("US" and "Irkutsk").

I am not a heavy drinker, especially not of straight vodka, but my attempts to politely sip were quickly shot down by Lena looking at me in puzzlement and saying, "No siiiiip - DRINK!!" and demonstrating. It was also made clear to me that you couldn't JUST drink - you had to eat something with each shot. Soon the salted cucumbers were gone, and it was nothing but cold fish dumplings and vodka. We toasted things like "Baikal!" and "Lena!" and - I kid you not - "Mother Russia!"

The sun had set and it was getting dark but Roma and David were still happily playing away (somewhere) when we were joined by Andre, the bus driver. Tanya pulled out another bottle and shot glass, and things seemed to be getting cozy between the two of them.

Cozy enough, in fact, that when Tanya and I both had to use the toilet (which is to say, big rock), I wiggled my eyebrows and asked, "Sooooo, Annnnndre?" in a suggestive voice. To which Tanya responded with the 'normal standards are off' vacation mantra that has since made it into family legend:

Here we all are, well after midnight and sometime in the midst of the lengthy process of begging off the rest of the party on the pretext of putting my child to bed (when it was definitely me who needed to go lie down): 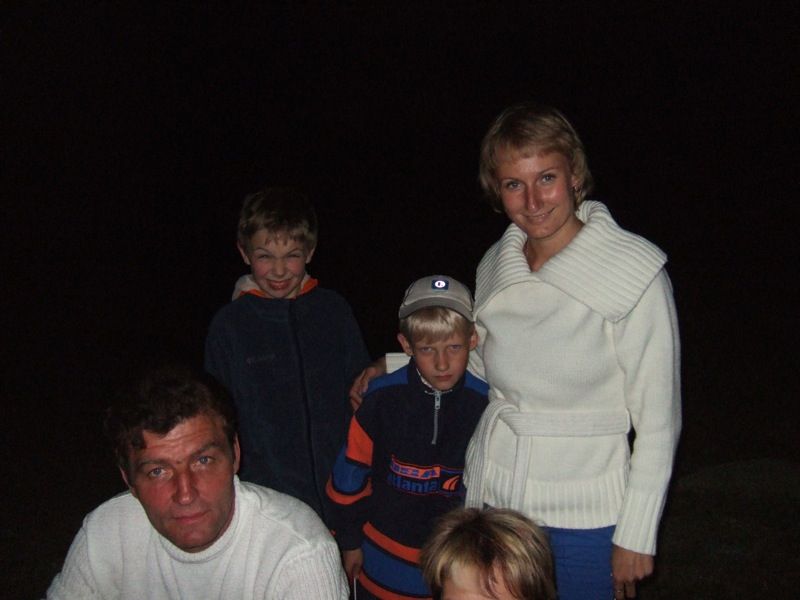