A few weeks ago, I found out that I'd made full professor.

I hadn't expected to be particularly excited about that fact. At my robustly egalitarian institution where there are no merit raises or salary raise retention packages, being a full professor doesn't mean more money (although it does bump you over to a category with a higher salary 'cap'). It mostly means that I get to stop qualifying my title. No more 'Assistant Professor Van Dyke' or 'Associate Professor Van Dyke.' Now I can sign things as plain old 'Professor Van Dyke.' Which is, of course, what most people thought I was anyway.

When I gave a paper at a workshop in Germany a week ago, and the scholar introducing me announced that I'd just been promoted to full, and everyone knocked the table in congratulations, I felt a completely unexpected surge of--I'll admit it--power.

Getting tenure seven years ago felt like a relief: at long last, job security! But there were so many other things going on in my personal and professional life at that point that the tenure milestone was mostly just absorbed into what my friend Andrew once described as the 'highly-organized whirlwind of chaos' that is my life. Making full, on the other hand, comes when I have the luxury of reflective space. And I have to confess: it feels like being legitimated. It feels like I belong at the table. I don't have to ask for a seat any more, or (let's be real) plop myself down there anyway feeling slightly defiant and/or ready to defend my right to be there if anyone challenged it. It's MY freaking table now.

That's right. It's my table, and I get to bring other people to it.

This realization has made me happier than almost anything else in my philosophical life. I've always said that if I have any influence in the profession (and I am acutely aware that I have been granted a ridiculous amount of privilege), I want to use it to connect amazing people working on awesome projects to other amazing people working on awesome projects, for the increase of net awesomeness across the field. And now I get to do that from the seat reserved for me at the table.

I remember a meeting in grad school where we were told that only 2% of the full professors in philosophy were women. (Ironically, I didn't pursue a career in the ministry in large part because I didn't want to always be the 'token woman'.) I remember my advisor in college taking me aside before I headed to Cornell to tell me that he was worried I didn't have the 'killer instinct' it took to succeed in the field. (He meant well, but...wow.) I remember a fellow grad student at a Halloween party a few years in telling me with a smirk that the wig I was wearing 'suited me because I'd make a good blonde.' (The comment was definitely meant as a slam on my general persona.)

Well, you know what? This loud, goofy, giggly, curvy (and dude--there is a whole entry waiting in the wings about what it feels like not to fit the small, dark, and intense image of the female academic; I am over trying to pretend like it doesn't make a difference), pink-haired philosopher is a full professor now. I am damn good at what I do, and I fully intend to make the table as awesome as I possibly can.

Interestingly--and uber-geekily--this rush of realization came over me when I was looking at a photo of me standing next to a statue of the Demeter of Cnidus at the British Museum the summer before I started grad school: 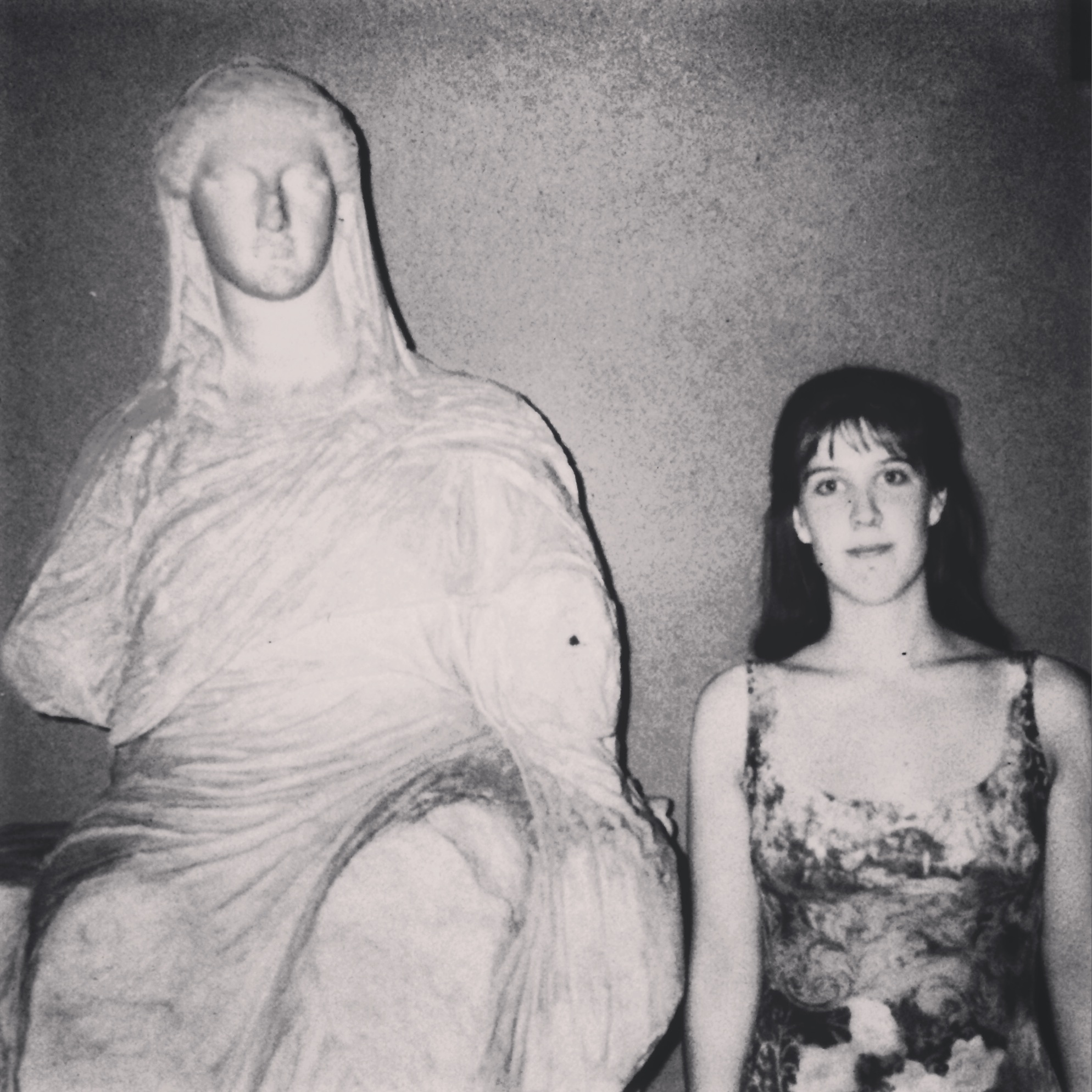 (I swear that I am looking this vacant only because I am trying to match the look on the statue's face.)

I am 21 years old in this photo, and I felt so grown-up. (For heaven's sake, I was on my honeymoon and heading to grad school). But nothing had happened to me yet. Nothing. I had not lived outside of the city in which I'd grown up and gone to college. I had not weathered the ups and downs of grad school. I had not had a baby and learned to parent. I had not watched the person I had promised to love forever destructively self-medicate his mental illness until it wasn't safe to live with him any more. I had not tried to get a job in philosophy. I had not tried to publish while teaching a full load at a liberal arts college and single-parenting. I am not Demeter in this photo; I am Persephone.

When I was a teen, the story of Persephone and Hades seemed darkly romantic: the dour-faced King of the Underworld snatches the flower-gathering young maiden and eventually (in the versions of the myth I preferred) she learns to love him. Her mother Demeter, in contrast, was kind of a drag, what with refusing to let anything grow and threatening the entire human race with starvation until she got her daughter back. (Also, there's that whole weird side-legend about how she nannies Demophon and Triptolemos and sends Triptolemos out into the world in her winged chariot to teach the world about agriculture after trying to make Demophon immortal by holding him in the fire by his ankle. Boooring.)

Now, though, I have mad admiration for Demeter. First off, she's the goddess of all kinds of awesome, peaceful stuff--grain, fruits and vegetables, pig-farming(!?), fertility, motherhood, and the freaking afterlife. Second, she's one of the only Greek goddesses who isn't either a perpetual virgin (e.g., Artemis, Athena, Hestia) or unhappily married (e.g., Hera, Aphrodite). In fact, she manages to be the goddess of motherhood without being attached to any particular male or being portrayed as promiscuous.

Most importantly, though, Demeter is powerful, and she owns her power. When she can't find her daughter, she climbs off her throne and goes out looking for her. When she learns Persephone has been kidnapped by Hades and is stuck in the Underworld, she goes on strike and refuses to let anything grow until the entire human race is complaining so loudly that the King of Gods himself has to give in and force Hades to return Persephone. And then once she gets her daughter back, Demeter teaches the human race about agriculture. No wars, no deaths, no greed, no deceit--she uses the powers she's got to get justice, and then she makes the world a better place.

Well, I'm not Persephone any more. I'm Demeter. And it's about time.