I'm currently in Sydney, Australia. But the most amazing thing I have seen so far is not a kangaroo, nor a platypus, nor the Opera House. It is the following church door: 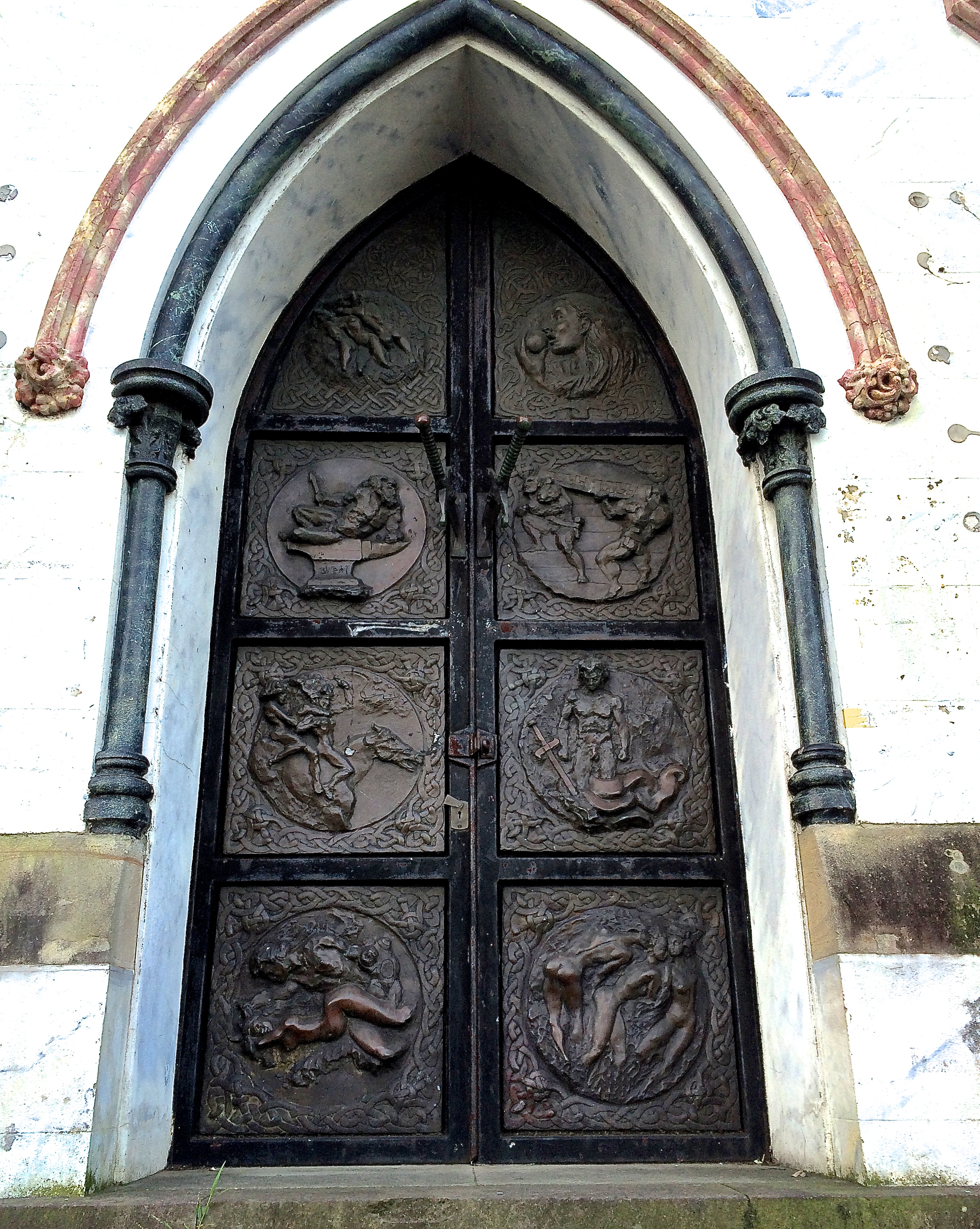 As a medievalist, I often pay attention to details of church architecture that most people don't care about...but I'll admit that in this particular case, what caught my attention was the incredibly ripped and strikingly naked Jesus. Church doors often have bronze panels depicting significant events (usually Biblical, and often the story of creation, fall, and redemption via the coming of Christ), so I took this photo intending merely to post it as a particularly impressive example of the "Ideal Man, and I Do Mean MAN" school of portrayals of Jesus.

[BTW, If you're interested in this topic, Leo Steinberg has an entire book, The Sexuality of Christ in Renaissance Art and in Modern Oblivion, devoted to this topic. Caroline Walker Bynum and others have critiqued his efforts as being a bit over-zealous (she accuses him at one point of finding a penis in every fold of cloth), but the fact remains that earlier times were much more frank about--and comfortable with--the idea of Christ's sexuality.]

But then I started looking at the other panels. And the more I looked, the more confused I got. In the end, I decided what was best was clearly to post the panels in pairs and supply running commentary.

One more very important note before I begin: above the door, the building just said "KIRK" (the Scottish word for church). So if all else fails, I blame the ungovernable Scots for what's happened here. FREEDOM!!!

Panels One and Two: 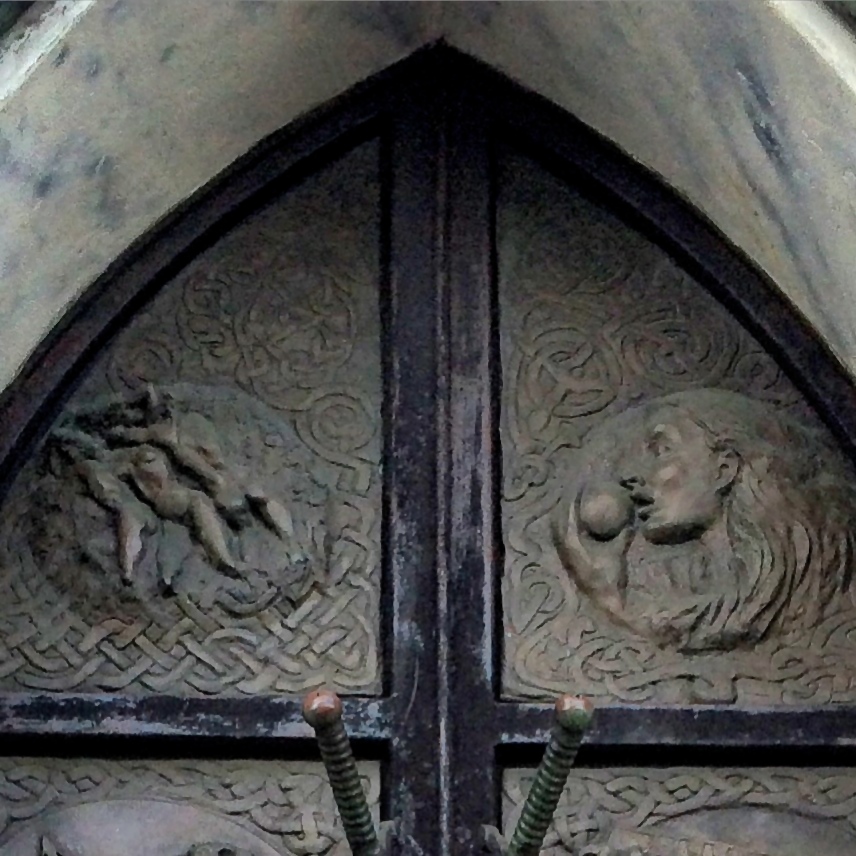 Now, I know what you're probably thinking, because I was thinking it too. "This one's easy! Clearly, the right-hand side is Eve eating the apple and thus bringing sin and death to the human race." Sure, sure. But then riddle me this: what's happening on the other side?

It's sure not any version of the Creation story I'm familiar with. Starting from the right, you've got a man's naked back, a woman's naked front, and then another sort of person. They are either all standing up and pushing something very hard to the left of the frame, or they are lying down in the world's most uncomfortable puppy pile. Creation of Eve from Adam's side?? Perhaps...but then who's the extra person? I know they say when you're dancing with a partner, you should always leave room for the Holy Spirit, but this seems a bit extreme.

FINE. We're still 1 for 2 on understanding what's happening in the panels. That is definitely Eve eating the apple on the right. Definitely. 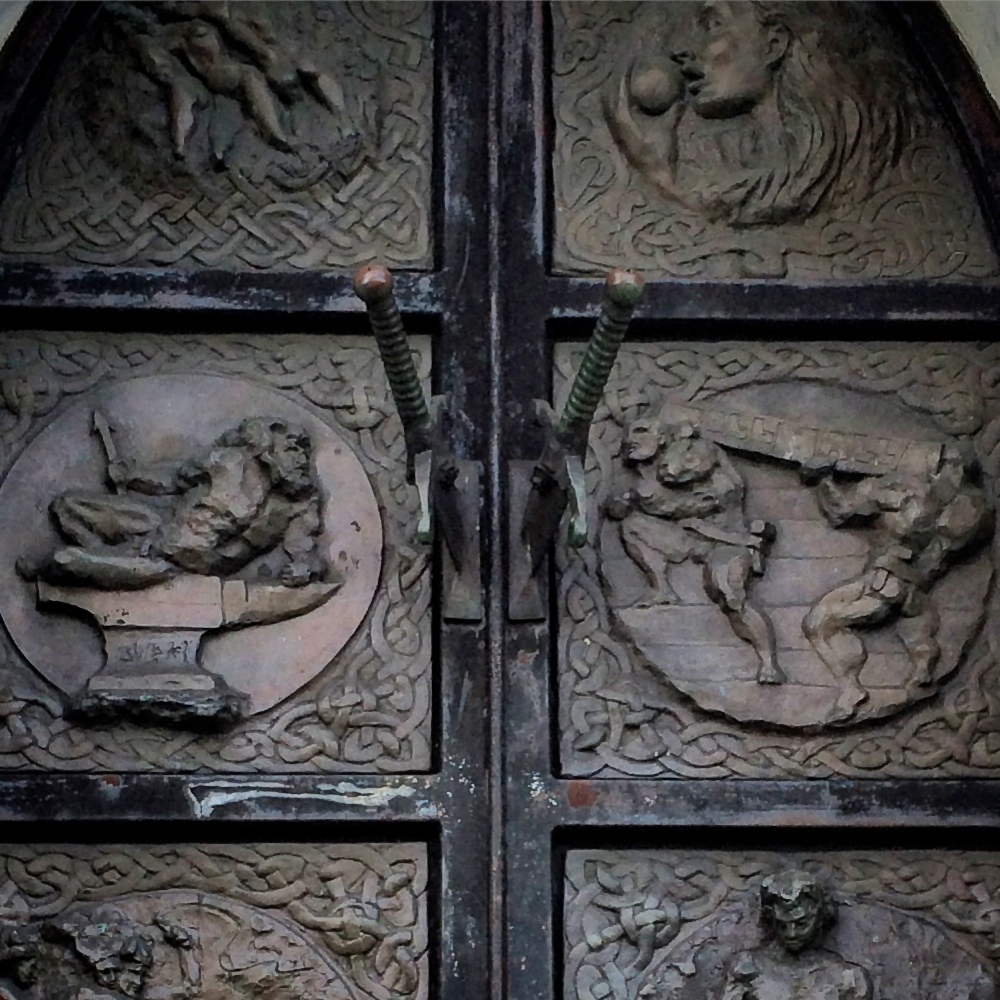 Ok. Before I even get to the panels, I think we need to appreciate that those are two swords sticking right out of that church door there. "Welcome to our church!" they say. "We're all about love, peace, and shelter!!" They are also placed too high for any normal person to reach, so the overall effect is that this is a church built for terrifying giants with so many hand weapons that they've just stuck two extra ones into their church doors to make it easier for them to open, while the little people jump around their feet like tiny terriers.

The giant theme is further reinforced by...whatever it is that's happening in these two panels. On the right, we've got two incredibly burly builders--buck naked, of course--who are clearly hefting some sort of beam to build some sort of structure. My favorite bit about this one is how deliberately the artist has portrayed their tool belts, with hammers carefully tucked in. That's sure how I like to wear my hewing hammer! Right next to my naked flesh. Can't be bothered to put on pants, but I wouldn't dream of leaving the house without strapping on that tool belt.

What are they building? If we're going for something after Eve eats the apple and before Christ conquers sin and death (which we all know is coming up in panel six), we've got the Tower of Babel, the Israelites in Egypt, and the Building of the Temple as likely candidates. Nothing to rule out any of those options, so let's look at the left-hand panel of the pair to see if if might shed some light.

Wait. No. That was the one where a bearded naked guy is lying on top of an anvil holding an arrow and watching the other naked dudes build. That really doesn't help at all.

If this were a classical setting, I'd call 'Zeus holding a lightening bolt' and let the anvil go. But no. This is a church door. With at least one other obviously church-y event depicted above it. Samsom? Samson with a spear? Samson with a spear and his famous trusty anvil?

This is the point where I started to wonder whether I just missed all the really interesting bits of Sunday School. But I spent 12 years in Christian elementary and secondary education, with services twice every Sunday and church school to boot! If this were Elisha calling up the ax head from the river, I'd be all over it. If it were Jael putting the stake through Sisera's head, I would recognize it instantly. Heck--if it were Jehu driving through the streets as Jezebel took her plunge off the tower, I'd know what I was seeing. But bearded guy holding an arrow on an anvil? I've got nothing. 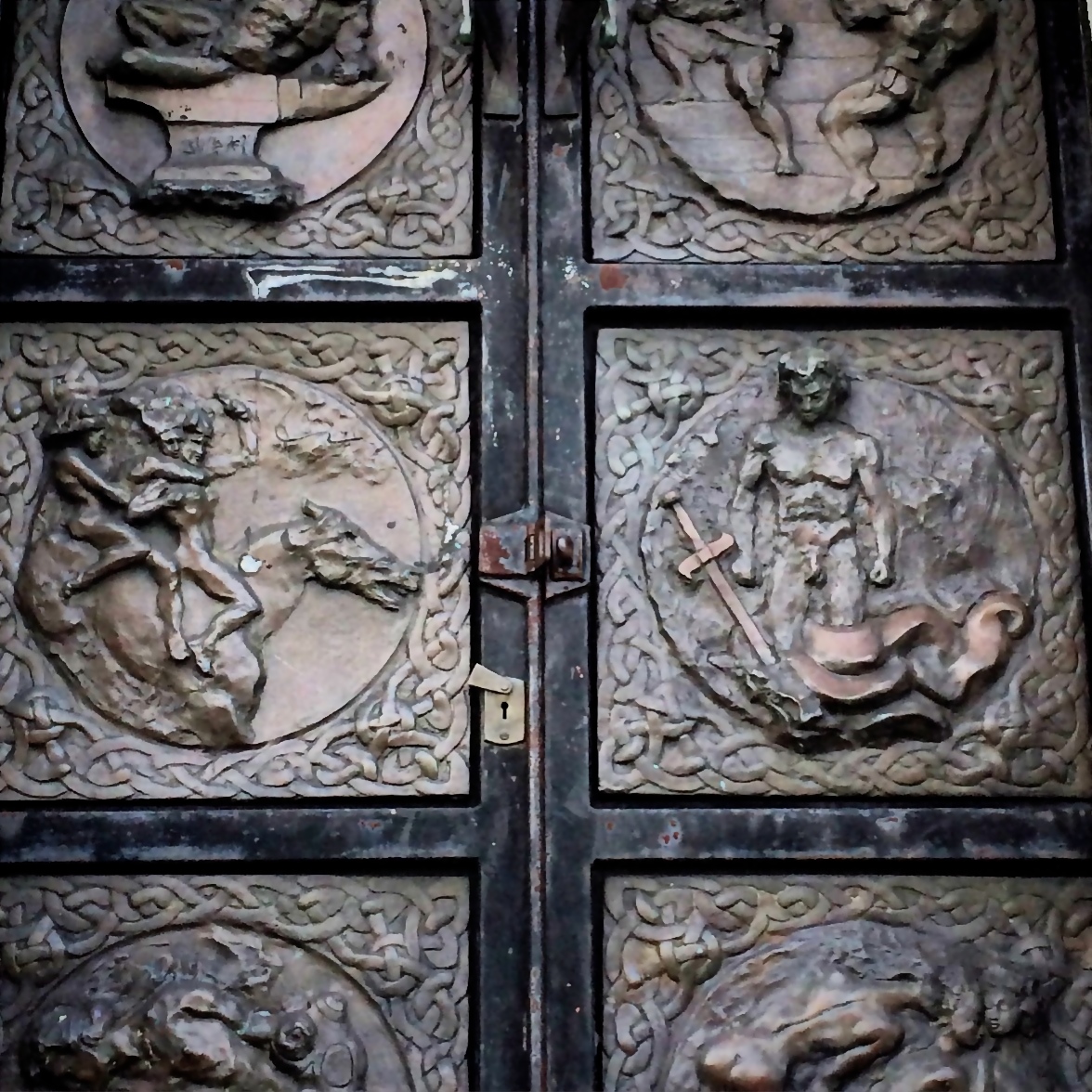 Once again, it's much easier to figure out what's going on...relatively speaking...in the right-hand panel. That there is clearly Christ conquering death and sin, as portrayed by the sword he's thrust through the serpent's head. (Either that, or this is the sauciest portrayal of St. George slaying the dragon I've ever seen. And since St. George is the patron saint of England, and this is a Scottish church, I'm going to guess against that option.)

Now, in the same way that we took a moment to appreciate the swords in the previous set of panels, I would like to suggest that we all take a moment to appreciate what clearly has to be one of the most ripped Jesuses in bronze door panel history. Because, wow. It's not just all about the torso here, either: those are some impressive thigh muscles. There are about 37 more things I want to say about this panel, but I also don't want to get struck by lightning, so let's move on to the other panel.

The panel that appears to show three naked people riding a horse together? Yes, that one.

Again, I can think of plenty of Biblical stories that involve riding horses--even more, if we include donkeys. But none of them involve three people riding the same horse together (clothed or unclothed), brandishing their standard. I'm going to call this one a very loose and imaginative rendering of Absalom riding to his death and let it go (you know--where he gets his long and famously gorgeous hair caught in an oak tree and hangs there until one of his father's soldiers rides up and kills him). 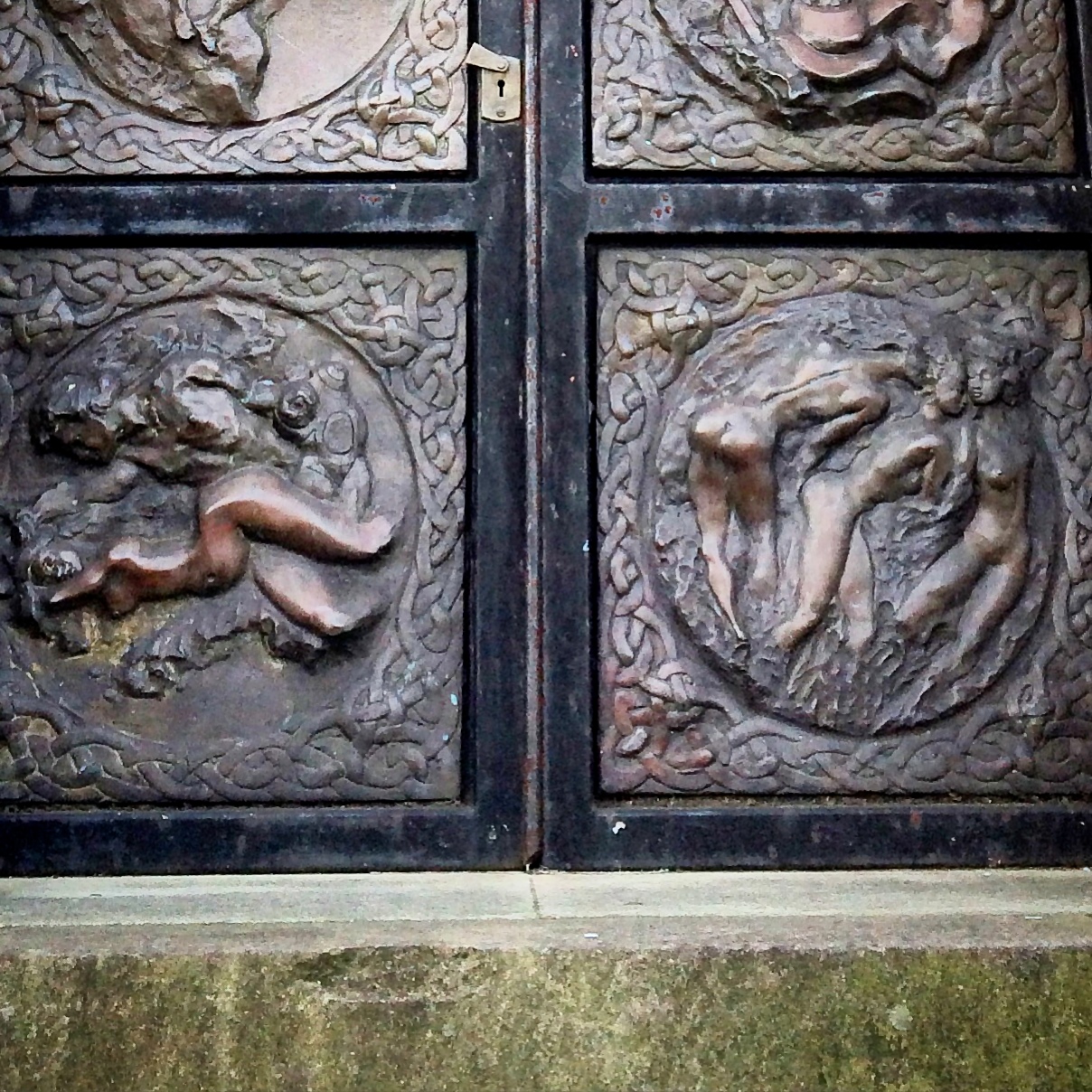 The panel on the left is clearly some dude leaning over to gaze at a naked woman, with a headless em-boobed robot cyborg behind him, and the panel to the right is three naked ladies who all seem far too fond of each other to be gracing a church door.

I officially give up. I have absolutely no explanation for the left-hand picture, which might be Adam beholding Eve for the first time if it didn't also involve the chesty cyborg and if it didn't break, like, every law of arranging bronze story panels on church doors like EVER.

And the frolicsome maidens on the right-hand panel? I've got nothing. Let's just all take a moment to appreciate the derriere on the woman to the left and call it a day.