A few days ago, a friend of mine posted photos of a series of mysterious placards on my FB wall. "Given your expertise in interpreting the mysterious pictograms found on airplanes," he said, "I was wondering if you'd be able to interpret these."

Looking at the pictures, I became increasingly excited. My friend had, all unknowingly, found and photographed The BANDIT Chronicles.

That's right. Graphic Placard Series are the bona fide new thing, and the Security Warning label is the cutting edge of publishing, placing the series in public places for maximal viewing. Viewed individually, the vignettes capture poignant moments in Bandit's life; viewed together and in their intended order (as they are here), they present a tale of love, longing, and loss that is truly for the ages.

The story begins where all such tales do--the moment where everything changes: 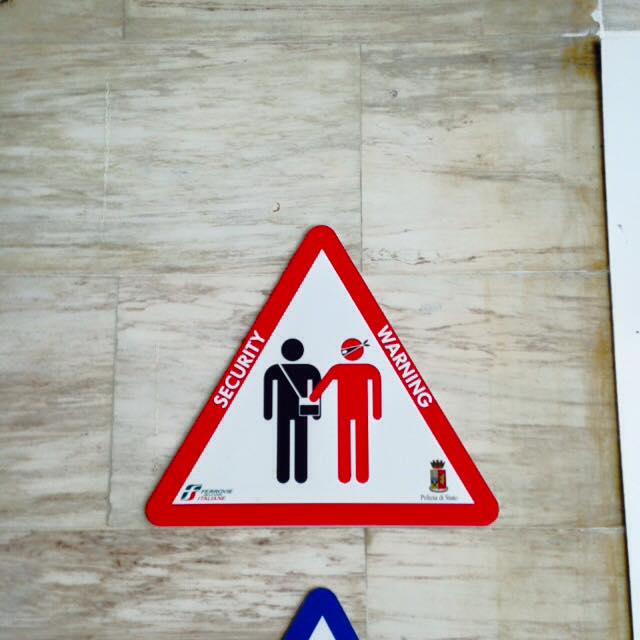 Alas, Bandit! He has been working up to this moment for so long...Standing next to his Beloved, he tentatively reaches out an arm, hoping to brush--and perhaps clasp--a hand. But his nerves are too great, and he fails to make eye contact at the crucial moment. Instead of making a meaningful romantic gesture, Bandit merely ends up patting the Beloved's messenger bag awkwardly while looking off at the floor in the distance.

What happens next? The Beloved, who does not understand Bandit's intentions and is a bit nonplussed by the awkward pat, strolls off nonchalantly to rendezvous with Little Sister, who is waiting to take the train to school: 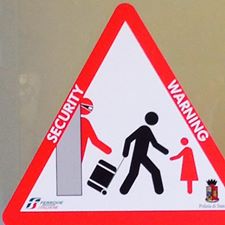 Bandit stands behind the Beloved, arm raised in silent entreaty. But the words do not come, and the Beloved moves away.

In the next panel, the romantic temperature has lowered from the fiery red of burning desire to the yellow of longing. The Beloved sits comfortably in the train, listening to--if the Beloved only knew!--Bandit's favorite band. Bandit gathers up the courage to walk past, but again fails to make eye contact: 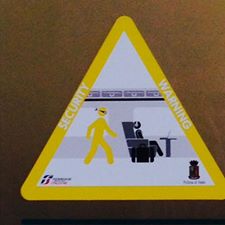 Another opportunity lost. But it will not be the last one.

As the train ride comes to an end (the little sister safely dropped at her school stop moments earlier), the Bandit walks past again: 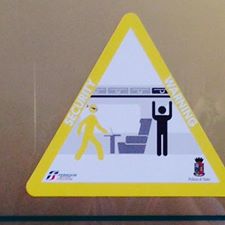 This time, the Beloved is reaching for the messenger bag from the overhead rack. Bandit is hit by a wave of humiliation at the memory of his earlier awkward encounter with the bag, and--again--moves past without speaking. Because the Beloved is facing away, the Bandit's longing remains unseen.

Finally, as they move toward the moment of parting, Bandit gathers up all his courage and approaches the Beloved with a bag in which he has carefully stocked several items he thinks the Beloved might enjoy: a bottle of water, some snacks... 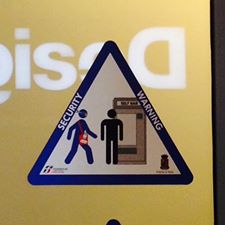 But it is not to be. The Beloved is already purchasing snacks from a vending machine, and Bandit realizes that his chances have passed. Soon, they will take different trains to different lands. Bandit's mood is blue indeed as he lowers his gaze and walks past...once again. 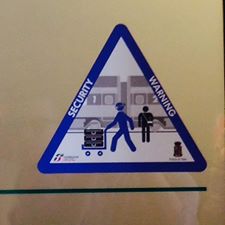 The final panel is a poignant portrayal of isolation and loss. The Beloved waits, unknowing of Bandit's passion, for a train the Bandit will never ride. Bandit wanders, through the station, lonely as a cloud, pushing a cart full of luggage for an elderly passenger who lags behind.

What will Bandit's fate be? Will he ever love again?! Keep your eyes open--the Security Warning label may post the next installment in your neighborhood.