I've survived the NYC apartment hunt! Implausible as it remains to me, from September 2017 - August 2018, I will be living in a gorgeous three-story brownstone on West 95th Street. We have 1000 square ft to call our own, on the top floor, with south-facing windows and a working kitchen, all less than two blocks from Central Park.

How is this possible when I still possess all my internal organs? In a word, ROOMMATES. Yup! That's right. For the first time since 2002, I will be living with someone who is not obligated to love me because I literally grew them inside me. Two someones, actually: my beloved, B, and my cousin, J. They are both high-functioning, responsible, grown-@$$ adults. The broker was so delighted by B's and J's application portfolios, in fact, that I essentially became their application-puppy: Look how cute it was that I'd applied, too! My hair was so shiny! I'd probably keep B and J very happy!!

(In my defense, I've spent the last 18 years raising a child entirely by myself, on a salary so low that he qualifies for not just free tuition but also free room and board at most universities on the East and West Coasts. I also give away 10% of that salary. And I pay a mortgage. And...well...ok, rather than invest anything left over, I've spent it on books and taking David with me on adventures all over the world. Yet, somehow, none of that translates into "OooOOOooo! Please rent our apartment!" in the NYC real-estate market. Go figure.)

As the Big Move approaches, I am not remotely worried about living with either B or J. I am, however, becoming increasingly nervous about their having to live with me. It turns out that I may be just a wee bit particular about having things a certain way (e.g., the RIGHT way).

In the interests of Honesty and Growing and Becoming a Bigger Person, what follows is a 100% truthful record of a recent incident in which it became clear to me that in a remake of the iconic Julia Roberts film, Sleeping with the Enemy, I would not get to play the quirky redhead trying to build a new life. I would not even get to play the charmingly laid-back love interest who sings and dances while he waters his lawn. Alas! Give the horrible husband who insists that all the cans in the pantry be organized into neat rows (with labels facing out, duh!) a love for They Might Be Giants instead of Berlioz and a perchant for righteous indignation instead of murderous rage, and sh*t starts getting a little too real. 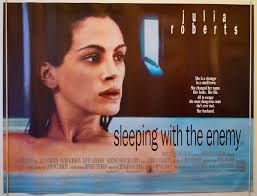 Remember why Julia Roberts looks so terrified in the movie poster? It's because she's just noticed that all the towels in the bathroom of her new home have been arranged to line up neatly in a careful row, and that means her horrible husband has found her again.

I won't lie: when I saw that movie for the first time, the sound I made when Julia Robert's character originally messes up those towels was less the triumphant "YEAH!" of my friends and more a distressed "Awck!" I mean, good for Julia Roberts for getting away from her abusive controller, but do those towels really need to suffer as a result??

Here is how this played out in my own home, where B is currently staying with me and David:

Me, bursting into study and brandishing towel: "Are you deliberately trying to punk me?!"

Me, entirely sincere: "You put the other two towels with the tan side out, but you put this one with the GREEN side out!"

B, still trying to figure out what's happening to him: "Yes?"

B, as it dawns on him that I'm serious: "Because I used a towel and then hung it up again without looking at its color?"

Me, realizing for literally the first time in my life that other people might be capable of not noticing which side of the towel faces out, "Wait...What? How is that even possible?"

B, even more confused but now starting to see the problem: "Honestly, I don't think most people pay attention to that sort of thing."

Me, firmly: "That must be false. This is the sort of thing people care about."

B, who has shared bathrooms with far more people than I have: "Sweetie? I think you might be the outlier here."

Me, suddenly remembering the bathroom scene from Sleeping with the Enemy: "Dear God -- I'm a MONSTER!"

B, trying to be supportive but also honest: "Maybe just a little?"

Me: "Crap!" [a few seconds pass] "But for real, could you please hang the towels so they're all the same color?"

B: stares at me for a moment, open-mouthed, and then quietly goes back to translating Latin.

Variations of this scene have occurred with what I'm sure B feels is alarming frequency in the past six weeks.

There was the Towels Need to be Spaced Evenly on the Hooks talk (which I'm confident B now recognizes as just good common sense), the What Do You Mean You Don't Make Hospital Corners on the Bed? interrogation (seriously, why would anyone even put sheets on a bed without making the corners neat and tight?), and the memorable Dear God, Why Would You Put That Bowl There? soliloquy (when a ceramic bowl was placed on top of a stack of glass bowls like their differing levels of transparency didn't even MATTER).

The worst part is that I can't even pretend that I don't care because, most of the time, it's as much a revelation to me as to B that I feel strongly about these things: my horrified reaction is utterly instinctive. The only person I've lived with for the last 15 years, after all, is someone who has no comprehension that Things Could Be Otherwise. David hangs the towels up the way I've taught him to, and in return I honor his desire for the hallway light-switches to be all either flipped 'up' or 'down', and for the different-colored cups to be stacked from dark to light. And now, after all this time, I find that we've been happily incubating bizarre neuroses.

As the move gets closer, I'd like to say I'm making progress, but mostly what I'm doing is learning how to work around the problem. When the zombie apocalypse is upon us, and we're scrappy survivors scuttling from one abandoned warehouse to the next, I will probably still fold whatever we're using for a hand-towel into neat thirds and find a way for it to hang with its front edge even with its back edge. But! I've at least figured out a way to avoid one fight.

Here is the last towel-related exchange I've had with B:

B, running into room and brandishing towel with joy: "These towels are the same color on both sides! I can't screw them up!!"

Me, smiling and nodding like an 80's sitcom mom: "That's right!"

B, doing his happy dance (which is a real thing, and incredibly adorable): "Yay!"

Now I just need to figure out how to talk to him about sorting the silverware. Either that, or get rid of all the soup spoons.