Welp, I did it! Two weeks ago, I arrived in Manhattan in style -- driving across the George Washington Bridge with my very own police escort.

I'll get to the police escort soon. First, though, a little story I like to call "The Ballad of Bill". 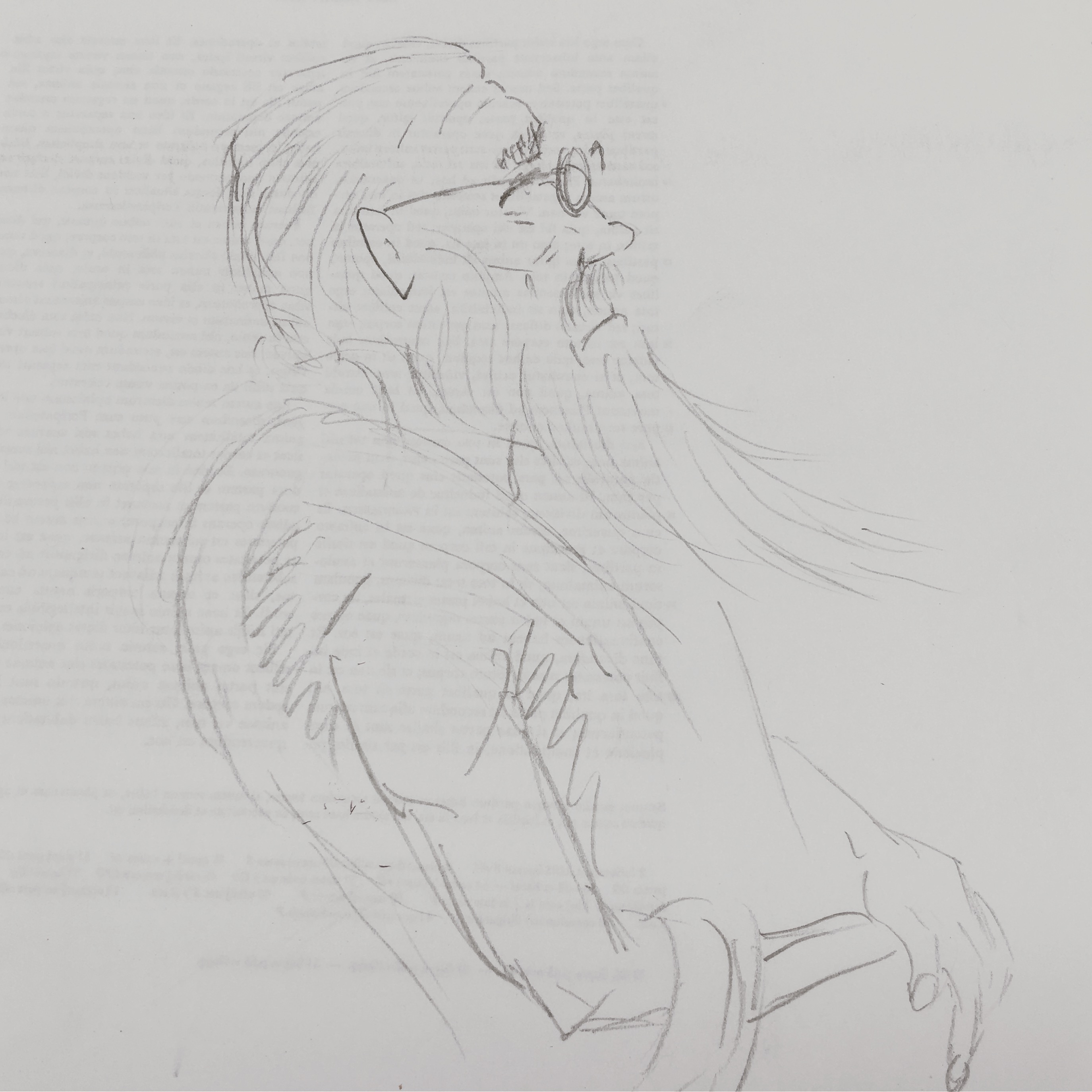 (Actually, this is a police-sketch-style drawing of Bill, to preserve Bill's anonymity. It really captures his essence, though.)

Bill runs a U-Rydget (business name changed to further preserve anonymity) rental business on the side of his regular job as a car mechanic. I did not mean/want to rent from Bill, but the regional U-Rydget rep had called me the day before to tell me that my 'preferred' truck size was not available at my 'chosen' rental location (read: the one that had really good reviews), and so I could either attempt to maneuver a 20-ft truck through the streets of Manhattan, or I could pick up the truck from a different location. I chose the other location.

The location where Bill works.

The sketch depicts Bill staring into space. This is most of what he did for the HOUR AND THREE-QUARTERS that it took me to pick up the already-reserved and physically present rental truck.

Bill kept entering the same information because each time he got to the final screen that claimed it was processing my receipt, the system kicked out an error message that told Bill that because he had changed the times on the original reservation, he had invalidated it, and that he needed to create an entirely new reservation and start all over.

Strangely, entering exactly the same information into the existing reservation each time did not yield new and exciting results in terms of getting me on the road with the truck. It did, however, void my $500 gift certificate.

I'll spare you the detailed play-by-play. Suffice it to say that it involved a bit of me talking to my local U-Rydget rep on the phone (who "doesn't do this sort of thing usually, Bill should just talk to his field rep"), a bit of Bill talking to his field rep ("he ain't gonna know anything anyway"), and then both of us sitting together in the tiny side-office of the auto parts store in total silence for twenty minutes waiting for Bill's field rep to call him back.

Meanwhile, my father (who had been kind enough to drive me to the truck pick-up site, and who was not about to leave until he personally verified that I had been given a fully operational vehicle) was bouncing around the store helping people, as is his wont. In the time it took Bill to enter, re-enter, re-enter, re-enter, re-enter, and re-enter my information (getting the same error message each time), my dad

To be honest, there was a period there where I worried that Bill and I were going to get into a physical altercation. I just didn't know which of us was going to strike the first blow. It's true that he was the one who had begun quietly pounding his clenched fist into his left thigh, but I was the one who could tell exactly what Bill was doing wrong each time he entered the information and I hadn't been able to get him to do anything differently.

After fifteen minutes of increasingly grim silence, however (and please keep in mind that this was following on a solid hour of repeated single-finger hunt-and-peck typing of the same information into the same computer form fields), I let out a huge mental sigh and started a conversation with Bill in which I sympathized with him about the vagaries of computer systems based on my years of teaching experience. I told him some funny related stories; Bill relaxed and started telling me how great the old computer system had been.

Then the field rep called back and told Bill that he shouldn't have changed the time on the original reservation, because that had caused all these problems. (SURPRISINGLY, THIS IS EXACTLY WHAT THE CONTENT OF THE FREQUENT AND IDENTICAL ERROR MESSAGES HAD ALSO LED ME TO CONCLUDE...AN HOUR+ EARLIER.)

The field rep did not immediately go on to explain how Bill should solve this problem, however, and Bill began to open up my original reservation again, his non-phone-holding pointer finger moving ever so ineffectively over the keyboard.

It was at this point that I cracked.

I physically took the phone from Bill. I did so with what was meant to be the sort of commiserating smile that people sometimes exchange on delayed flights or stalled subway cars, but I think it was actually the sort of smile that indicates that resistance will be met with an untimely and unpleasant death.

I spoke to the field rep. I told him we were going to cancel the existing reservation and make a completely new one, that he was going to figure out how to credit me the $500, and that I was going to pay exactly the amount of the original reservation and not one penny more. Then I cancelled the old reservation on Bill's computer, made a new reservation, entered all of the necessary information, and printed out the contract. I was on the road five minutes later.

(I haven't yet received the Visa statement with the rental truck charge on it, but despite the assurances of Bill's field rep, it would not surprise me if there were five separate charges for the full amount of the van, and if they had also charged rather than credited me an additional $500 each time.)

Anyway! The police escort across the George Washington Bridge!

That's actually a fairly boring story: it turns out that as you're driving towards Manhattan, there are multiple signs that tell you that local traffic goes to the right and that all trucks should stay left. I was local traffic insofar as I needed to get to W 95th Street, and the 15-ft moving van hadn't counted as a truck at any of the various points along the 14-hour drive from Grand Rapids, so I happily followed the signs for local traffic...

...until right after the last possible turn-off, at which point the signs for local traffic also said "passenger cars only" and I was stuck.

Fortunately, another van was in the same situation, so by the time I'd gotten through the toll booth, there was already a cop car with its lights flashing waiting to escort us across six lanes of traffic and onto an 'emergency only' ramp that led us safely onto the correct part of the bridge. (It was quite exciting, but also extremely embarrassing.)

What's happened since then will have to wait for later entries, but I've got a whole list of classic NYC experiences to work through, and I promise I'll share some of the results. Next up? Shopping at Zabar's the day Rosh Hashanah begins.