I would promise that some of my posts this year will not be about living in NYC, but I try to say true things.

A lot has happened in the month since I got to the Upper West Side. Rather than give you a narrative, what follows is an annotated list of six "Classic New York Experiences" I've already had. (Don't worry -- there is very little overlap between my list and the "Top 10 Things to Do in New York!" or "Insider Tips on Hot NYC Spots!!" lists FaceBook keeps adding to your timeline.)

We'll start off with a real classic:

This happened my first week in the city, and let me just say that I'm much less impressed with the Rodents of Unusual Size in The Princess Bride now -- Wesley might as well have just been fighting a sewer rat. "My" rat was large enough that real NY-ers were stopping to comment on it, in a Seinfeld-esque "Will you look at that!" sort of way. Not gonna lie: I was vaguely proud that my first rat-sighting was a good one.

(I did not battle the rat.)

My friend Amy invited me to join her pre-New-Year shopping extravaganza, and who am I to shy away from a challenge? She warned me that it might be a fight-to-the-death-over-varieties-of-kosher-honey sort of situation, but it was surprisingly chill. It's also good that I live 15 blocks away -- which in NYC means there are at least 15 grocery stores between here and there -- or I would be blowing all the money I don't have this year there. (Imported better-than-nutella hazelnut spread? Don't mind if I do!)

One highlight of the Zabar's trip was being asked by an old Jewish woman to pick up two cans of tomatoes for her from the bottom shelf -- when I did, she scrutinized them both carefully and then asked me to put one back and get her a different can instead. Then she told me I was a blessing, and my friend Amy said that meant I've officially been inducted into the tribe. I'm living directly across the street from an orthodox synagogue, so I know that's not technically true (I was bummed to find out that I couldn't even attend their 'Dine and Discover' night due to my extremely non-Jewish heritage), but it still warmed my homesick heart.

(Admission: Yes, I am a bit homesick. Four weeks is just long enough for the 'Woo-hoo! Adventure-time!' adrenaline to have worn off and the 'Wait -- where am I again?' alienation to be in full force. I love where I am and what I'm doing here this year, but I miss familiar people and places. I especially miss my child! Fortunately, said child is happily doing his sophomore year thing and thinks he's being A Very Good Son by texting occasionally. [He's not wrong.] But I'm digressing!)

Another Classic NYC experience I keep having:

This one caught me totally by surprise the first time it happened, but now I can spot a potential 'ask' a mile away. I've helped out entire extended Australian families, Italian mothers and daughters on an adventure, bewildered Germans who clearly expected better signage, and more Midwestern couples than I can shake a stick at.

The best part is that they've usually asked me questions I already know the answer to -- often because the answer is either obvious or visible somewhere in the immediate vicinity. I never point out the 'tells', so this generally leads to lots of good will and increased trust in the Kindness of NYC Residents.

Them: "Which stop should we get off at for Washington Square?"

Me: "West 4th!" (carefully not pointing to the "W 4th/Washington Square" printed on their map.)

Them: "Why does my credit card not work in this machine? What is this 'zip code' it keep asking for?"

Me: "It's your US postal code, but you don't have one because you're European. Just use an ATM card and your PIN instead."

Me: "It's the street you're on!" (not pointing to the street sign behind their head)

The only time I get stumped is when it's late at night and they're asking me about which train to take places. This leads me to the next item on my list:

In an earlier post, I mentioned that everyone who lives in NYC seems obsessed with the MTA. I'm starting to understand why. It's because the MTA is clearly designed for some purpose other than transporting people around NYC. If the actual intention of the MTA was to move people around the city in a timely and efficient manner, F trains would not sometimes randomly turn into A trains for 7 stops (stops not on the F-line) without more advance notice than some mumbling over the always-malfunctioning intercom. B trains would not stop at 34th St and suddenly announce that they are now running express straight to 165th street. The 14th Street station on the C would not be called 8th Ave on the L. (And don't give me that "It's because the L runs along 14th Street" crap because the L has a 14th street stop. It's just not the same one.)

The only real question is "What is the true purpose of the MTA?!"

There are any number of theories about this -- the internet is FULL of people's theories. I'm still working on my own. Stay tuned.

It turns out that all those stories about how you can get anything in NYC are totally and completely true. Not only do I not have to leave Manhattan to get anything I want -- I don't have to leave my neighborhood! My neighborhood has two natural food stores in addition to Whole Foods, three hardware stores, any number of restaurants and bars, a garden store, Birch coffee, five laundry/dry-cleaning shops, approximately one billion bank branches, and Central Park. Our part of which looks like this: 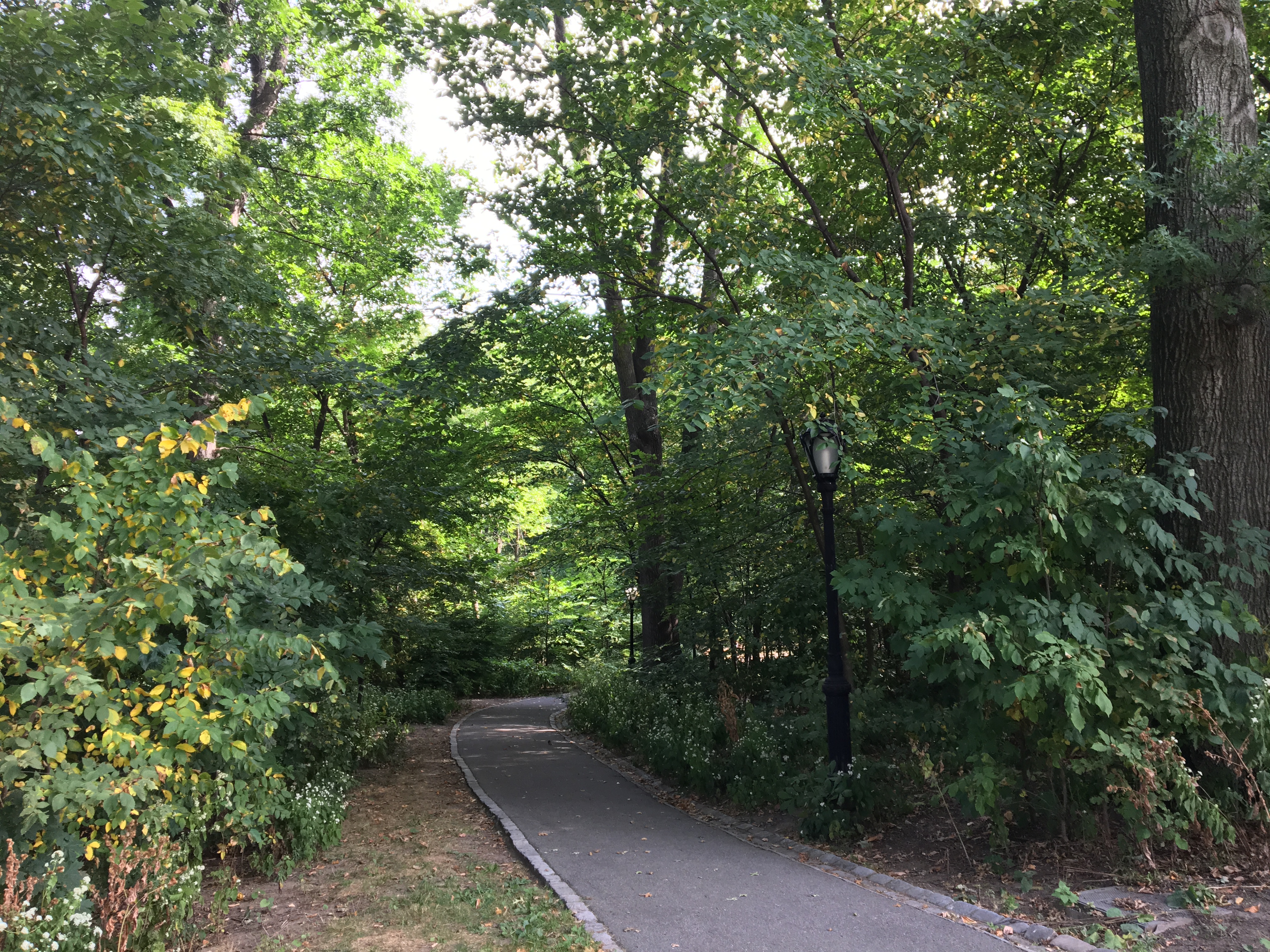 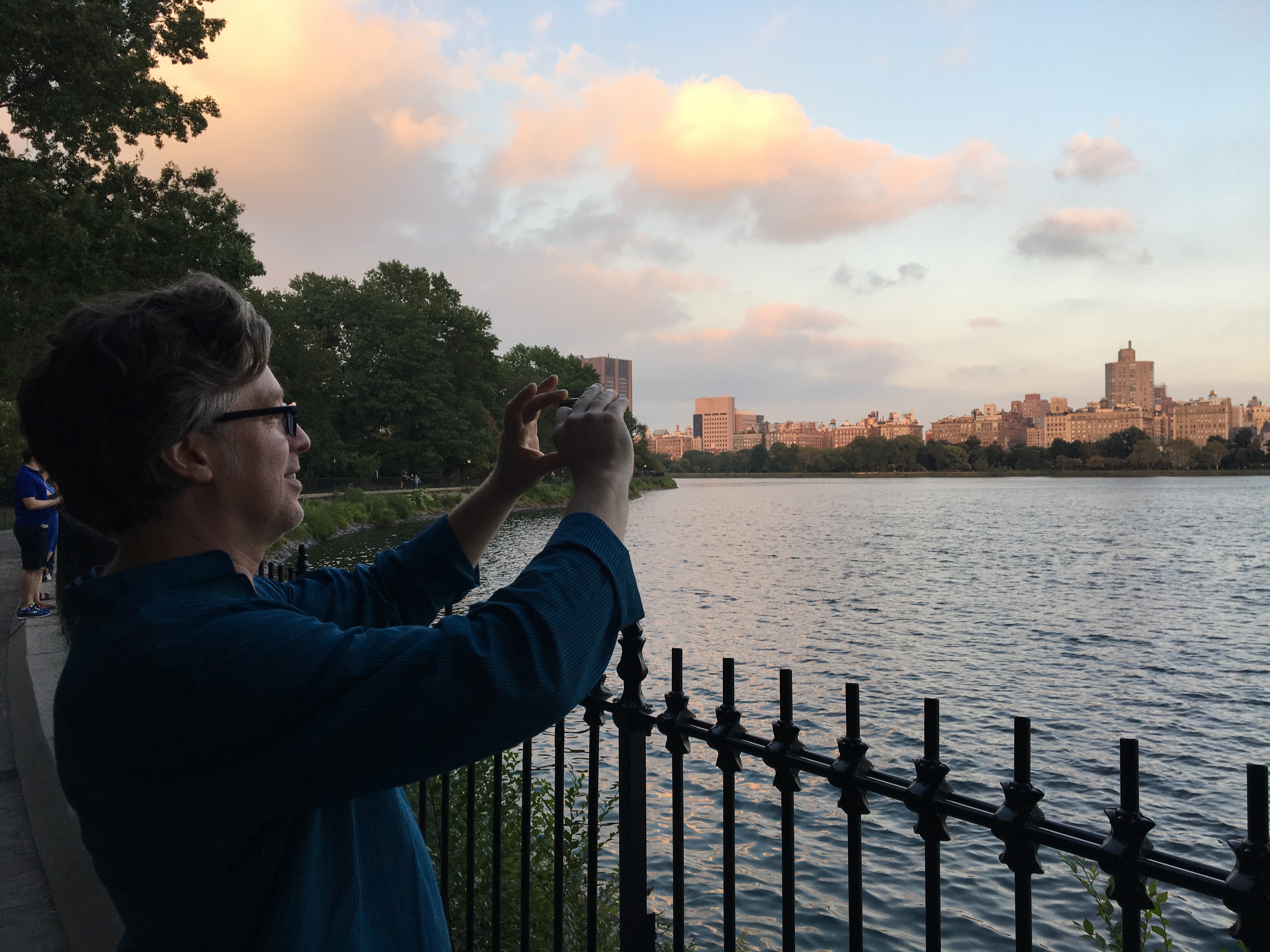 I take the train to New Jersey at least once a week to go to Rutgers, and I travel around in Manhattan a lot, but in the past five weeks, I've only made it to Brooklyn twice, and I got exactly three streets into the Bronx to return the rental truck.

I do intend to get to all five boroughs eventually, though. Honest! (Good thing I've got eleven months left.)

Last but not least, a quintessential NYC experience:

I'm a medievalist, and I've been to my fair share of medieval festivals...in Europe (especially Italy, where I was doing research this past summer). In Europe, a medieval festival usually involves a small village celebrating its heritage, with games for kids, flag twirling, and drums. The only people dressed up medieval-style are the people selling home-made food and drink and the people participating in the programs.

The medieval festival at Ft. Tryon Park was JUST LIKE THAT! 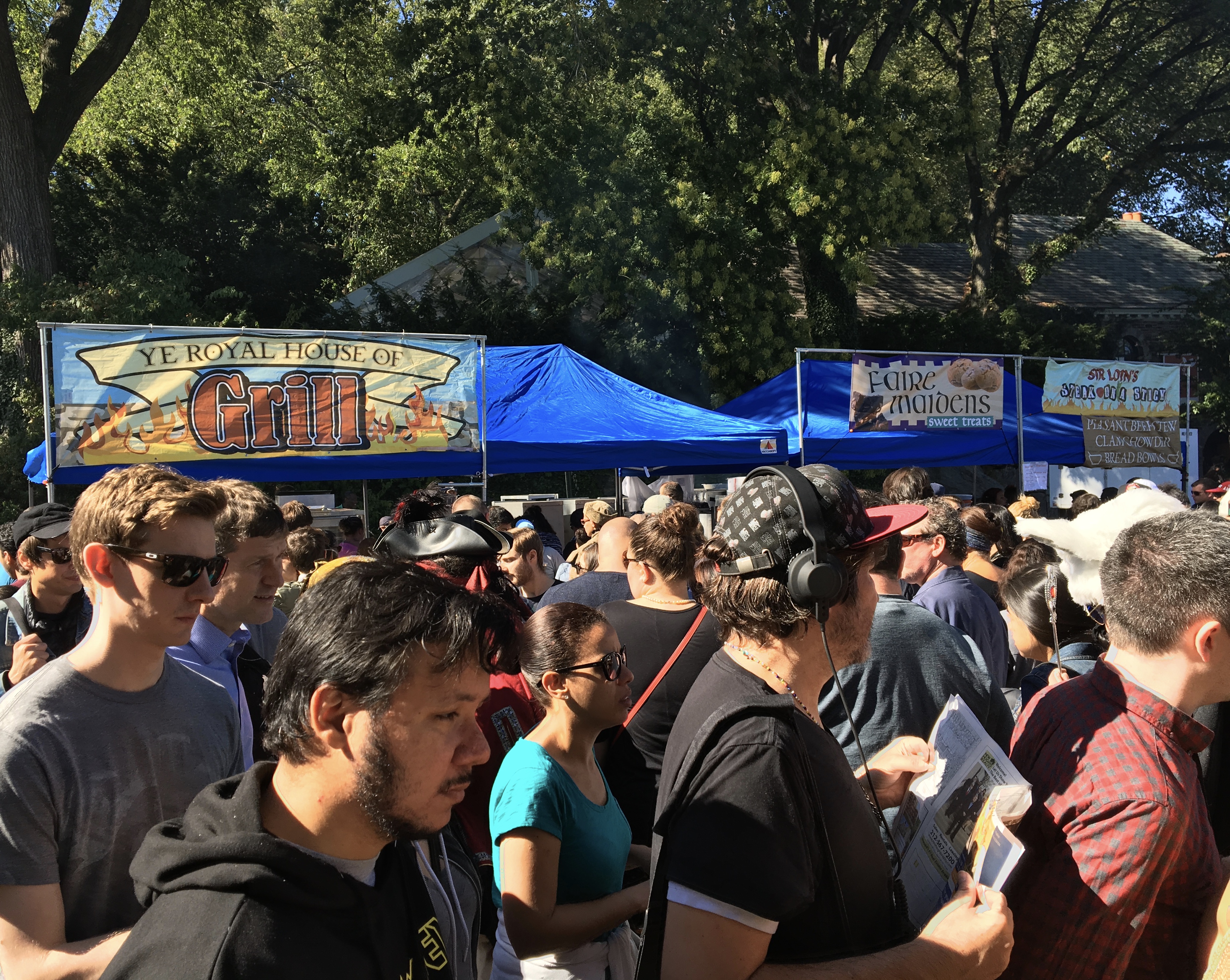 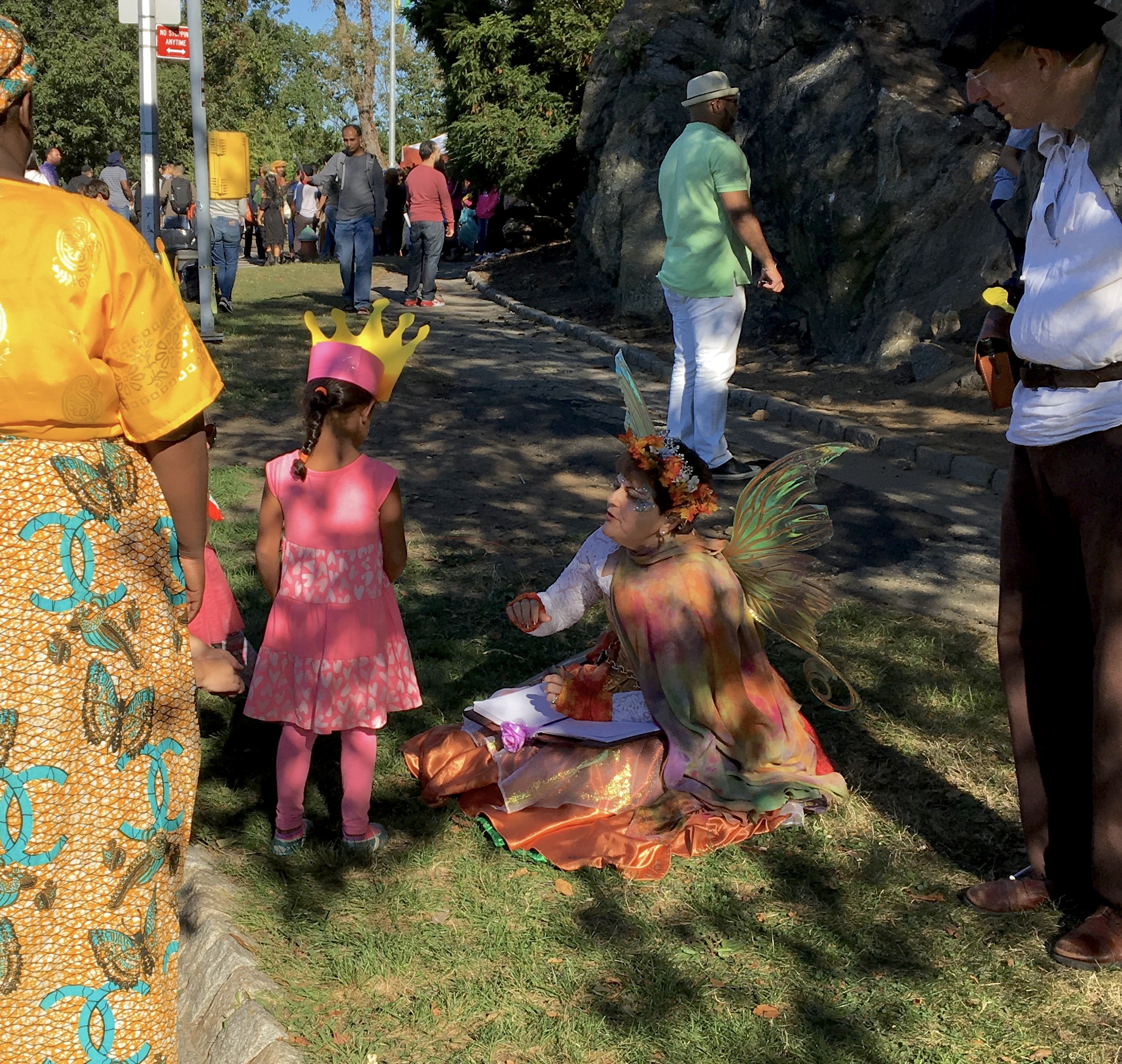 Seriously, I think it might have been the single most American experience I've ever had. It was amazing. The climax was the Grand Joust, which was hard to take good photos of, so here's a mediocre one of two grown-ass adults wearing full armor and aiming wooden poles at each other on horseback, and then another one of an unhorsed squire fighting a knight still on horseback: 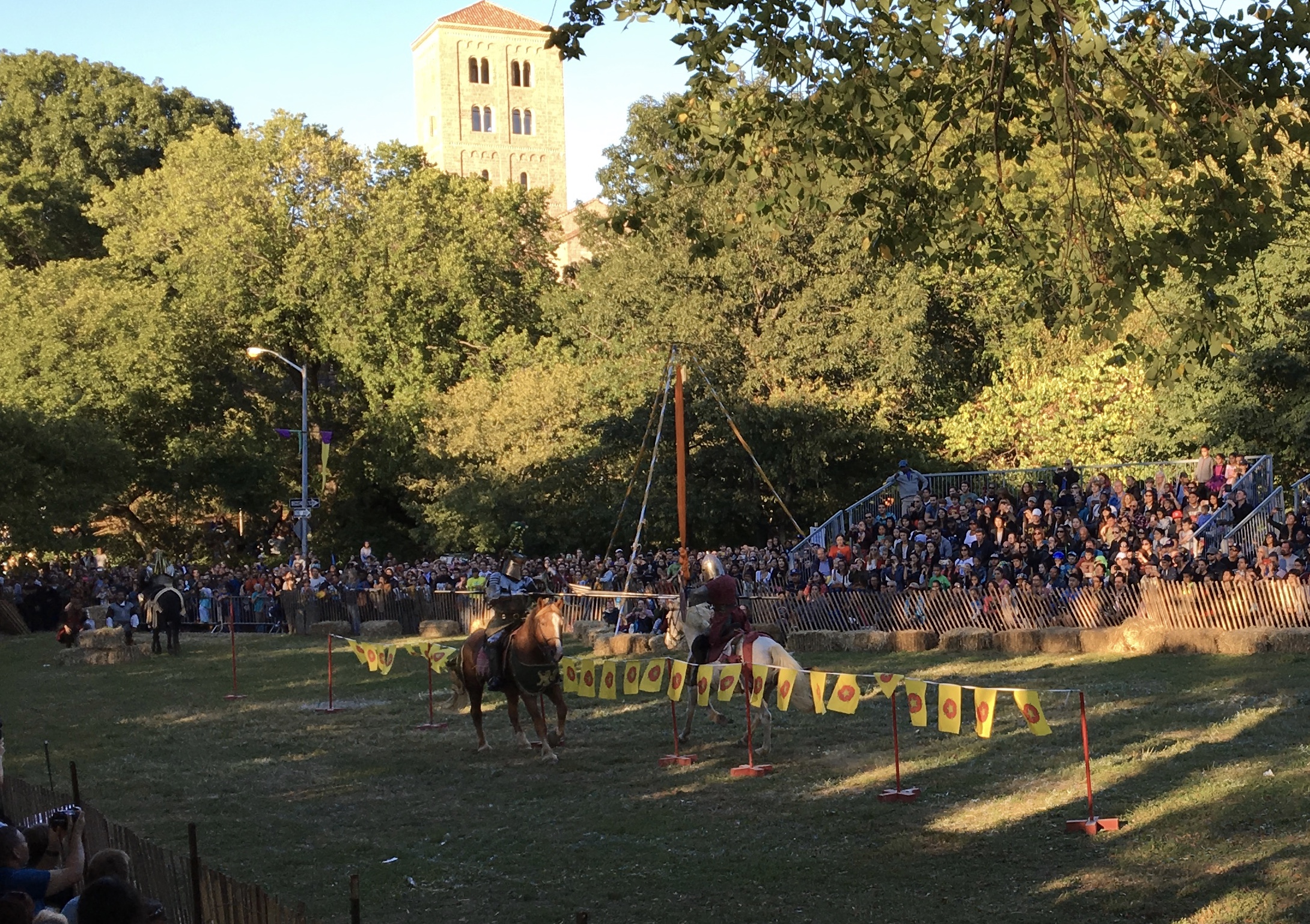 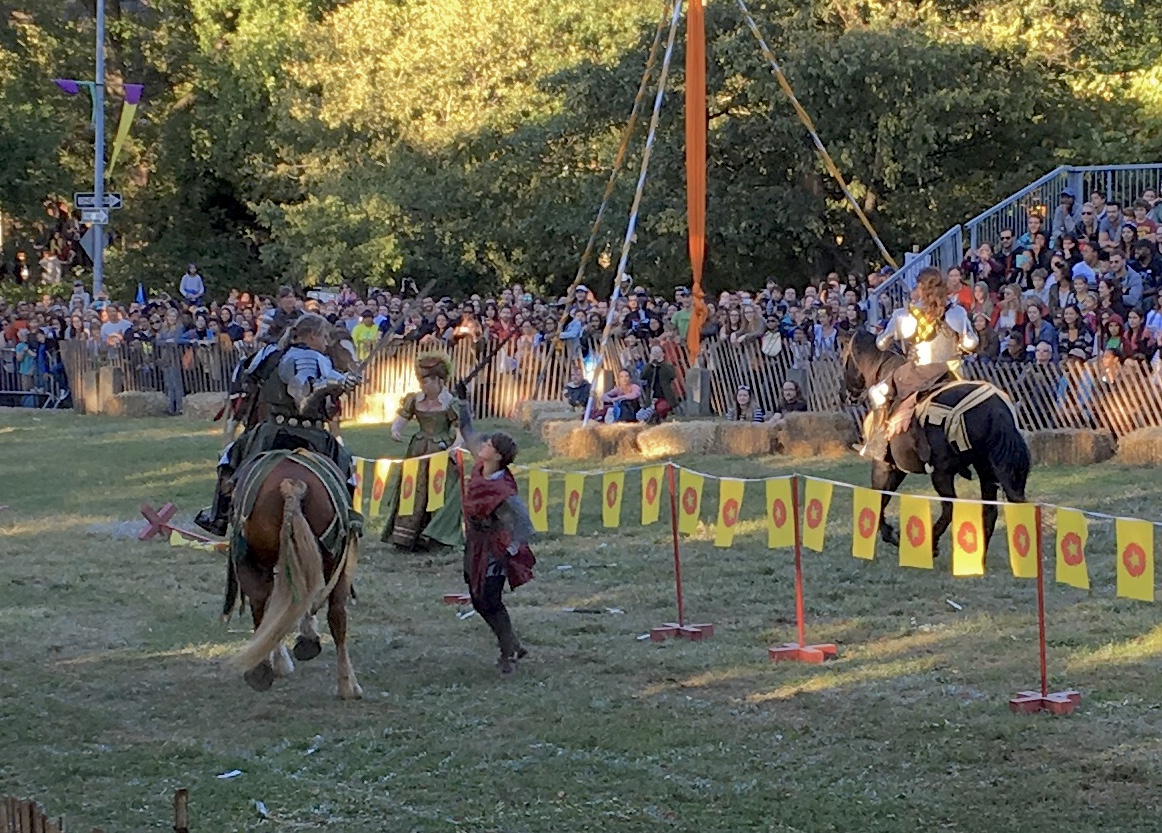 What you can't get from the photos is the NYC crowd, which cheered enthusiastically for our arbitrarily assigned champion and chanted things like "Battle of the bad haircuts!" and "Both of you suck! Both of you suck" at the other combatants until it was all over and 60,000 people tried to pile on the southbound A-train at the same time.

And that's all for this post! Wishing you well from the Upper West Side...
CVD