There isn't a person in NYC who regularly rides the subway and doesn't flinch when they hear those words. In the best cases, it means a talented performer is going to strut their stuff...loudly...for a stop or two and then pass the hat. In the worst cases, it can mean (and these are all experiences I've had myself):

My favorite thing to do during these performances is to watch the other passengers in the car. It's often the only time natives will intentionally make eye contact with total strangers on the MTA: a sympathetic glance when you're directly in the line of show-fire, a knowing look, and/or eye-roll all become acceptable. Even a wry smile is allowed -- provided you keep your lips closed. I've discovered that one of the most strictly adhered to (albeit unspoken) NYC rules is that smiling at strangers is acceptable iff you do not show your teeth. (Toothy grins are acceptable only if aimed at animals or small children.)

NYers are also worth watching in these situations because they are natural critics. I watched one guy get called down to the end of a car by two elderly women who handed over one dollar a piece only after some robust critique: "I wanted to see more dancing! Less talking. You talked too much." "Yes! Much less talking, and more moves! We want to see some more dancing!"

Another time, I watched a severely hung-over dude on the C-train chew out a performer without opening his eyes or picking his head up off the seat. After one stop, he started shouting, "SHUT UP OR MOVE ON TO THE NEXT CAR, MOFO! ONLY ONE STOP PER CAR!" I loved that the problem was not the quality of performance (or lack thereof - this was the enthusiastic saxophone blower), but rather the violation of common subway decency that Mr. Hang-Over objected to. (He may have used a few more words than I have here attributed to him. He may also not have said 'mofo'.)

This is the moment where another person would segue gracefully into a "But you know, NYC itself is the REAL show!" monologue, ala "The CITY is the fifth character in 'Sex and the City'!" But, while known for many things, I am not known for either my graceful segues or my predictability, and so instead I'm going to talk about how strange Halloween was.

It's important to note that NYC gets very excited about its holidays - and perhaps no other city on earth is better at staging and pageantry. B and I went to a Halloween extravaganza at the Cathedral of St. John the Divine, for instance, that completely blew my mind. We walked in to see a zombie skeleton playing the cello to an audience of grotesques, illuminated by standing candelabra: 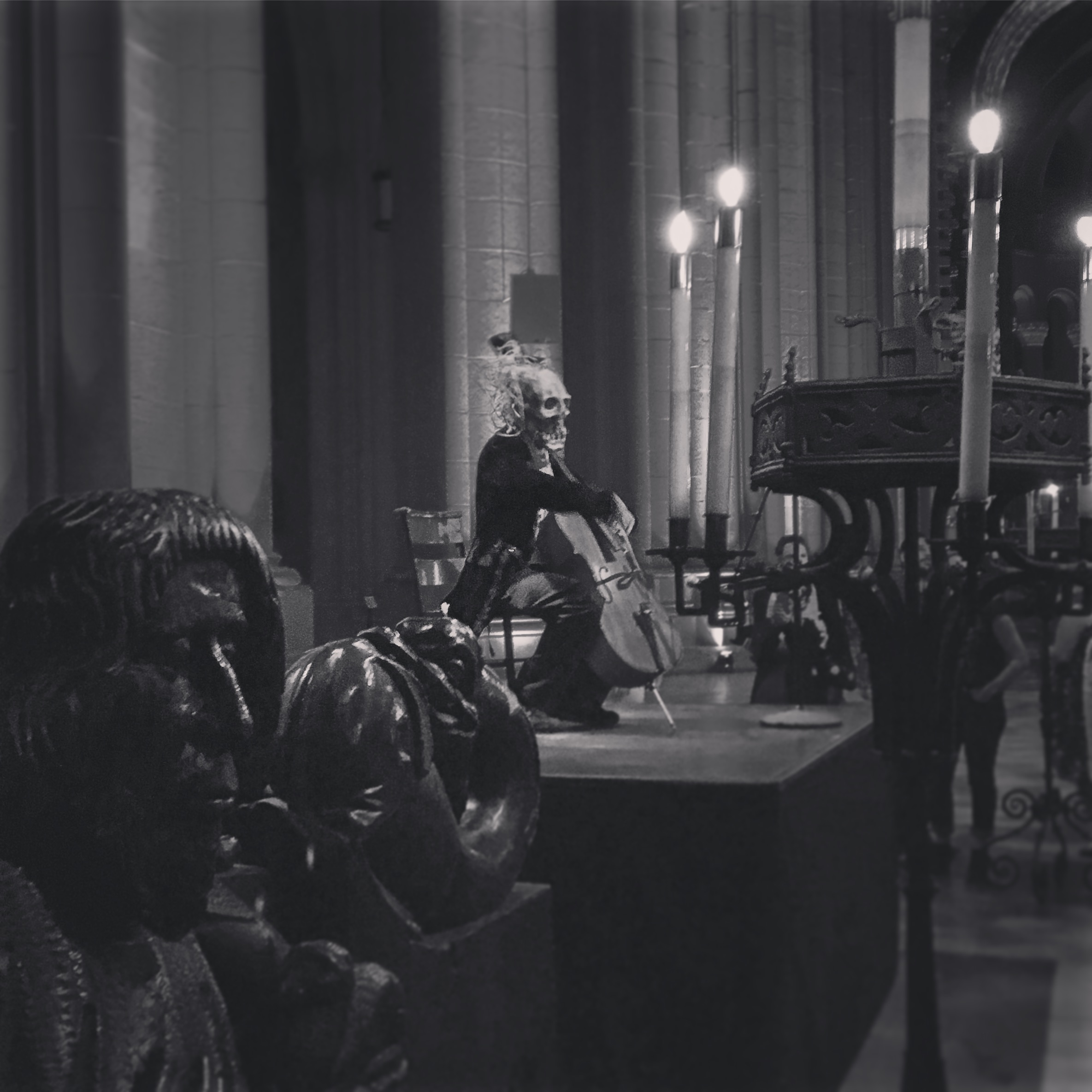 We then walked down the central aisle of the largest cathedral in the world to fourth-row seats and watched the silent black-and-white film of "Phantom of the Opera" (1925)...which was projected onto a giant screen at the front of the sanctuary and accompanied by the great organ of the cathedral. 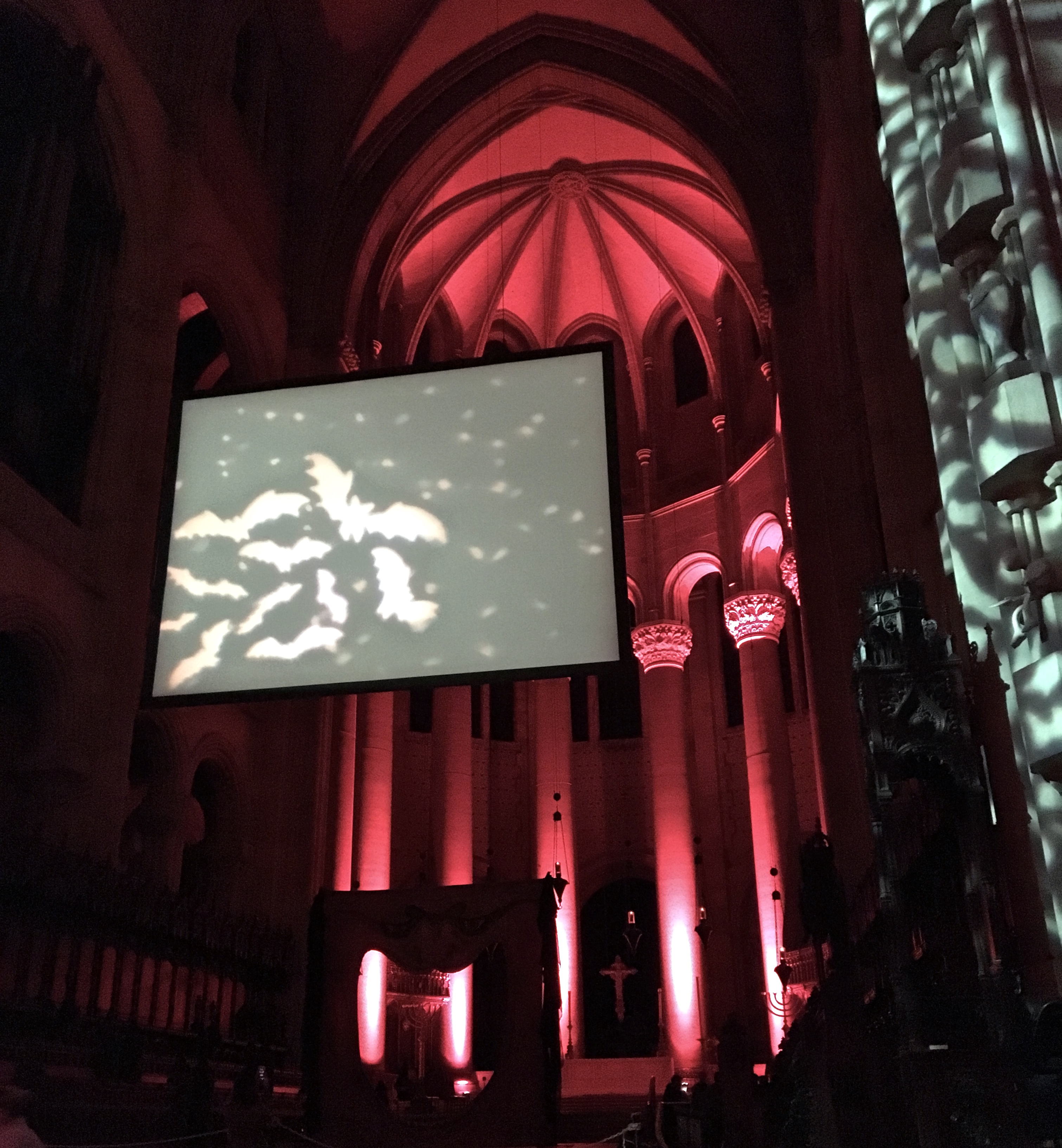 (I don't know how to post a video here, so you'll just have to believe me that this is perhaps the best possible context in which to experience Bach's Toccata and Fugue in D-minor. I had chills pretty much the whole time, and that's a long-@$ piece of music!)

As though that weren't more than enough, after the movie ended, the organ continued to play and an entire procession of impossible creatures capered out of a giant mouth (which you can see at the very bottom of the picture above) and around the church: some giant puppets, some a mixture of man + muppet, and some like the following imp, whose photo I have because he literally took my camera away from me, switched it to selfie-mode, and started snapping away: 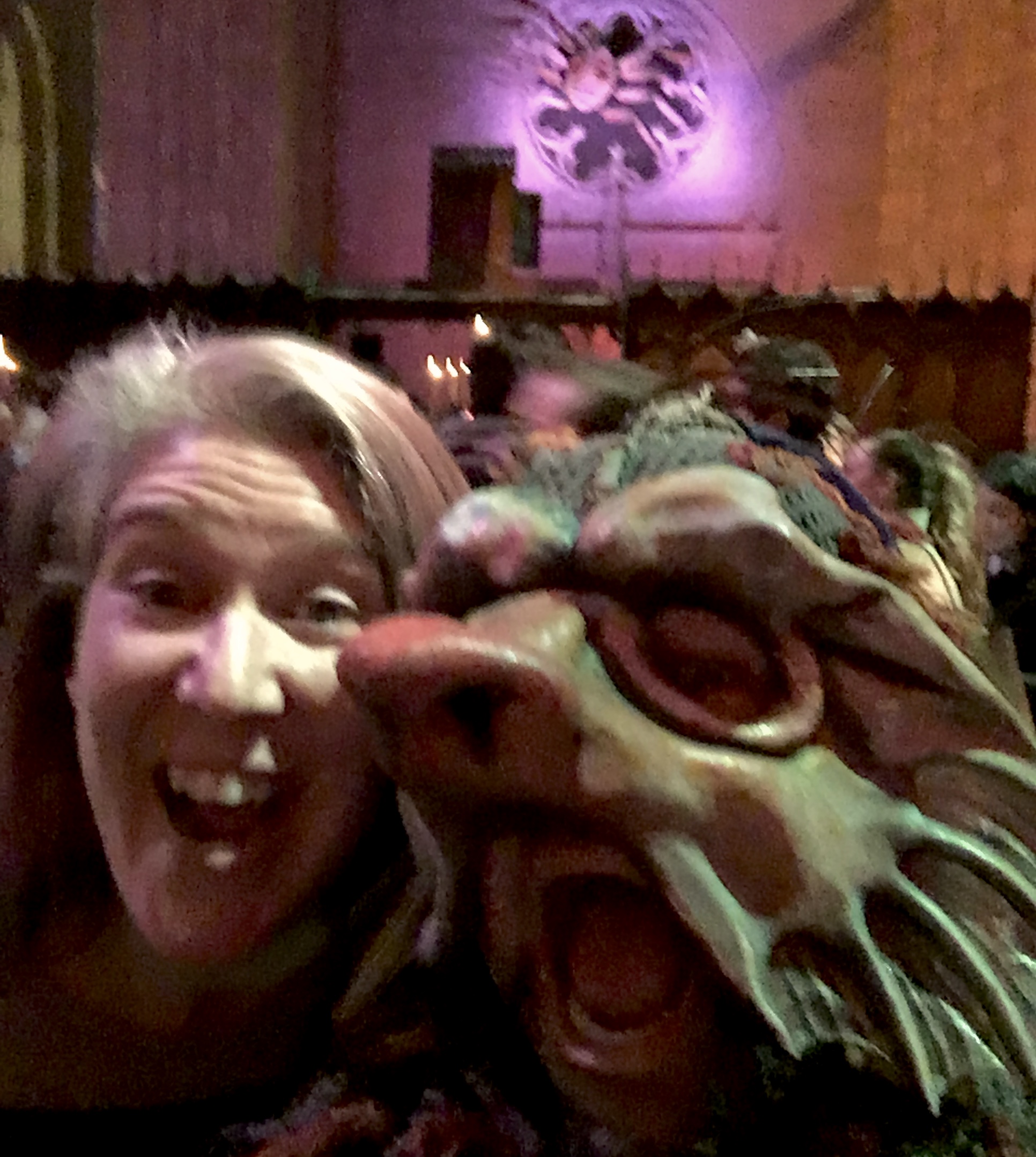 It was one of the most incredible (in the original sense of the term) things I've ever experienced, and it was walking distance from our apartment.

Then, on Halloween itself, we woke to find that our neighborhood in - sorry, on - the Upper West Side was fully decked out: 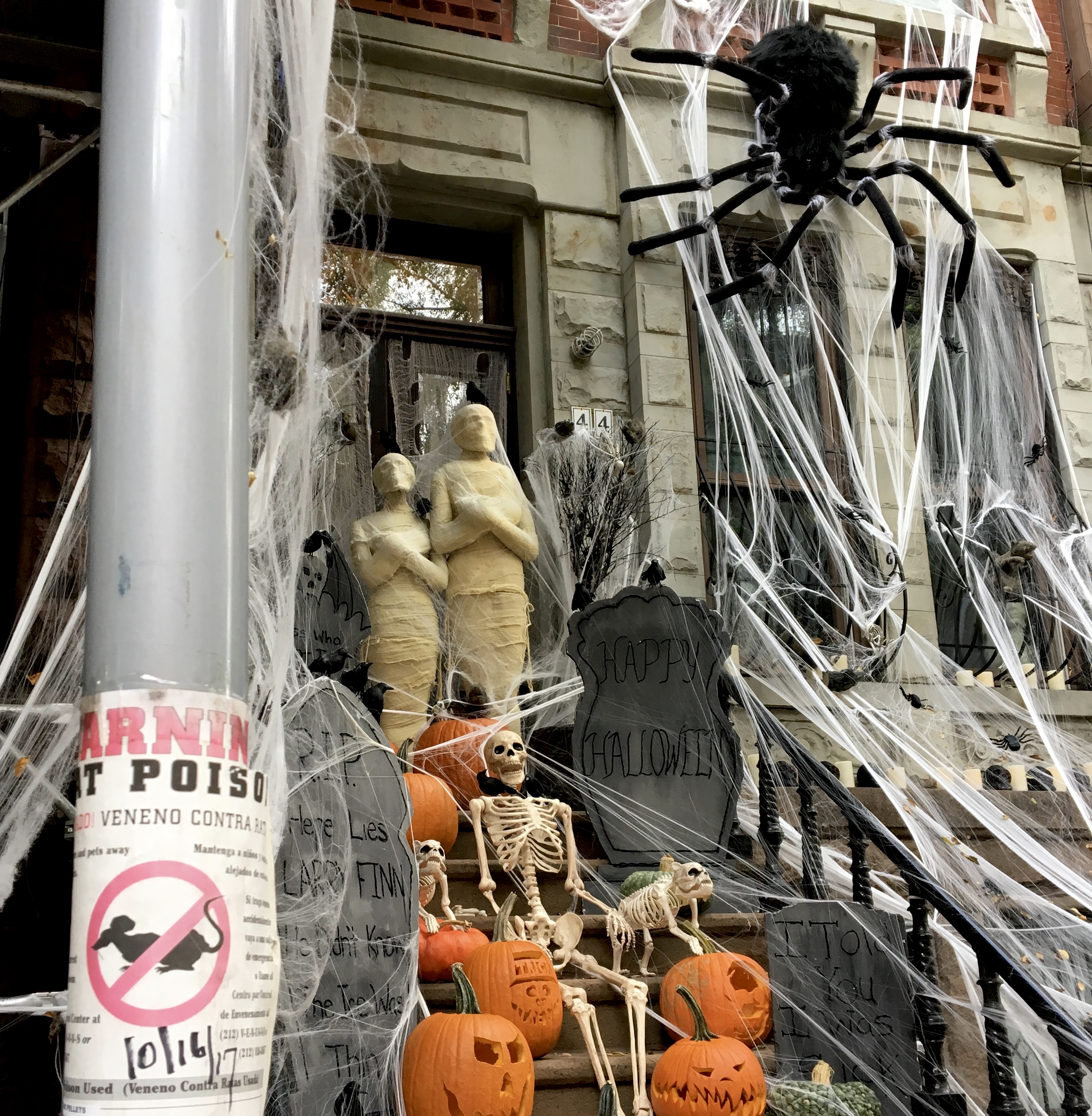 (I include the very much non-Halloween warning about rat poison because it cracked me up. "Be Very Frightened of these gourds, children! Oh yeah, and watch out for the poison.")

It got me super-excited about all the adorable children who were surely going to be flooding the neighborhood that evening to enjoy this Halloween wonderland. Tiny WonderWomans and ghosts and pumpkins and turtles...awww! Then I found out that in NYC, the kids all go treat-or-treating at local storefronts in the middle of the afternoon.

The effect this produces is bizarre to the newcomer, to say the least - not least because NYC doesn't have anything like a normal trash pick-up system, and so stores pile their garbage in loosely-tied bags right on the street. There you are at 3pm, walking down Amsterdam, and the sidewalks are full of people going about their normal business, a week's worth of garbage per business...and tiny tykes in costumes tottering past trash bags piled higher than their heads to ask for candy from hardware stores and nail salons and dive bars.

As a child of Midwestern carpools, porch lights, and cul-de-sacs, I can only marvel at the treat-or-treat memories this must provide.

"Remember that real estate storefront that got shut down for racketeering? They had the BEST taffy!"

"Totally! And the gumdrops from the hair extension shop? SO GOOD."

"And when we got that drunk guy to give us all his change, and Mom got mad because you put it in your mouth?" [happy nostalgic laughter]

Then again, my parents went to immense lengths to bring us kids to Pony Penning Day after reading us Misty of Chincoteague, and my enduring memory of the entire trip is the visceral horror of seeing a dead cat lying in the road with its entrails and ribs exposed. As my Mom says, "You do what you can, but your kids are going to remember what they will."

In any event, our street is full of brownstones and was completely deserted during trick-or-treating. Then night fell, and it was an all-out party on our block. I saw more of my neighbors in five minutes than in the previous eight weeks; people were handing out steaming beverages like they were candy. (There might also have been some candy around?) It was more like a pumpkin-themed Mardi Gras than what I'm used to for Halloween. 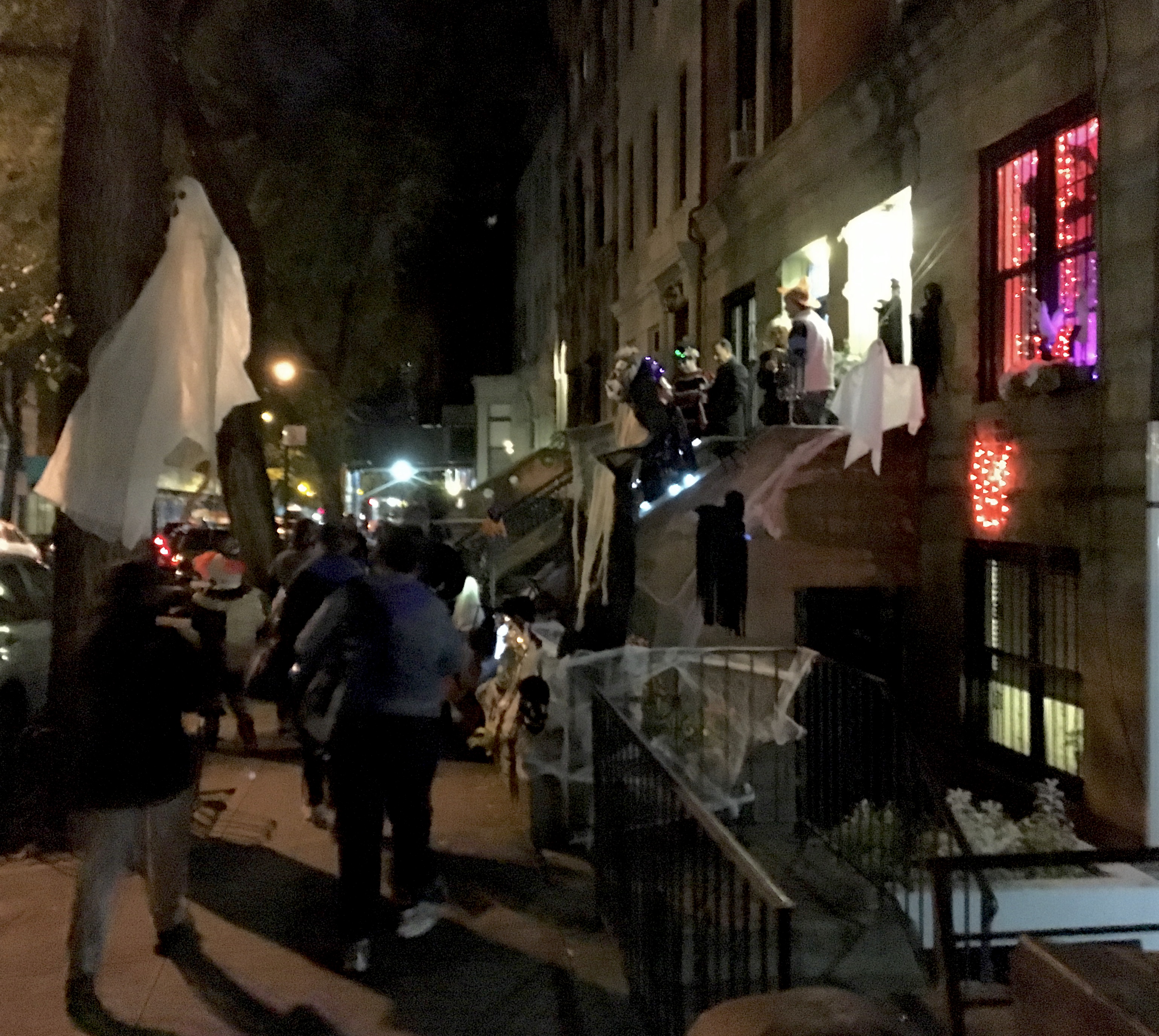 (You can't really get the scope of the festivities from here, but this is the only photo I have that suggests that anyone actually lives in any of the brownstones around us, so I'm posting it.)

The next morning, this was all that was left: 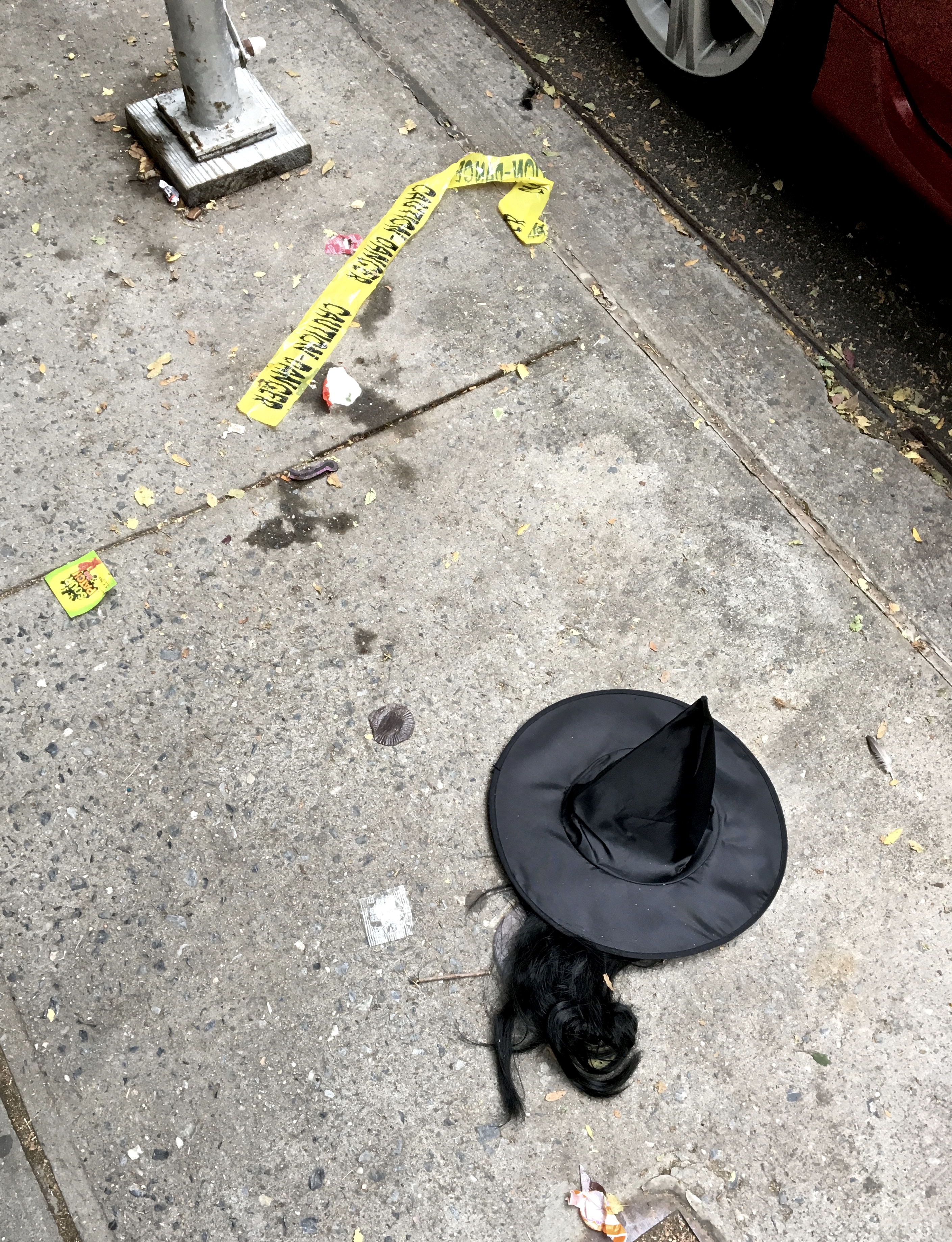 NYC Halloween in a nutshell.