Last week's release of the live-action Mulan means that I've had the pump-up anthem "I'll Make a Man Out of You" (from the 1998 animated version) running through my head on infinite repeat. It's also reminded me that in the summer of 2006, I became a Real Man not just once, not just twice, but TWO and TWO-THIRDS times.

Before I talk about the rigorous processes through which I became 2.666666666666(repeating) times a Real Man, though, let me be very clear: any version of Mulan that doesn't include Li Shang ripping his shirt off to lead Mulan and company through the world's most inspiring training montage is just...missing the entire point.

I mean, I also had problems with how the live-action version basically turns the ancient concept of chi into midichlorians, ala Star Wars: Episode One. And the inexplicable addition of a younger sister whose entire persona consists in being afraid of spiders. And the part where the evil villians run DOWN a vertical wall almost gave me a stroke. I rolled my eyes when they ran up vertical walls at the beginning, but what the FORK is up with making characters run down a vertical suface? Even if they're all pumped up with midichlorian chi, wouldn't it be faster to just jump down using GRAVITY?!

But mostly, WHAT IS EVEN THE POINT OF A MULAN WITHOUT THE SHIRTLESS LI SHANG TRAINING SONG MONTAGE??

Ahem. Anyway. Let's get down to business.

The first time I became a Real Man it was by hiking up to the Great Wall of China, and I didn't even realize what had happened until afterwards, when our Chinese guests kept telling the 8 year-old David excitedly that he was a Real Man now. Given that I'd climbed it with him (and even more of it with him on an extended hike a week later), I happily adopted the title as well: "Christina VanDyke, Professor of Philosophy, Real Man." (Note for the geeky - the basis for this is a saying attributed to Mao: "One cannot be a Real Man unless they have climbed the Great Wall." Which doesn't actually entail that climbing the wall MAKES one a real man. Still, that's how the saying is popularly interpreted today, and who am I to disagree?) 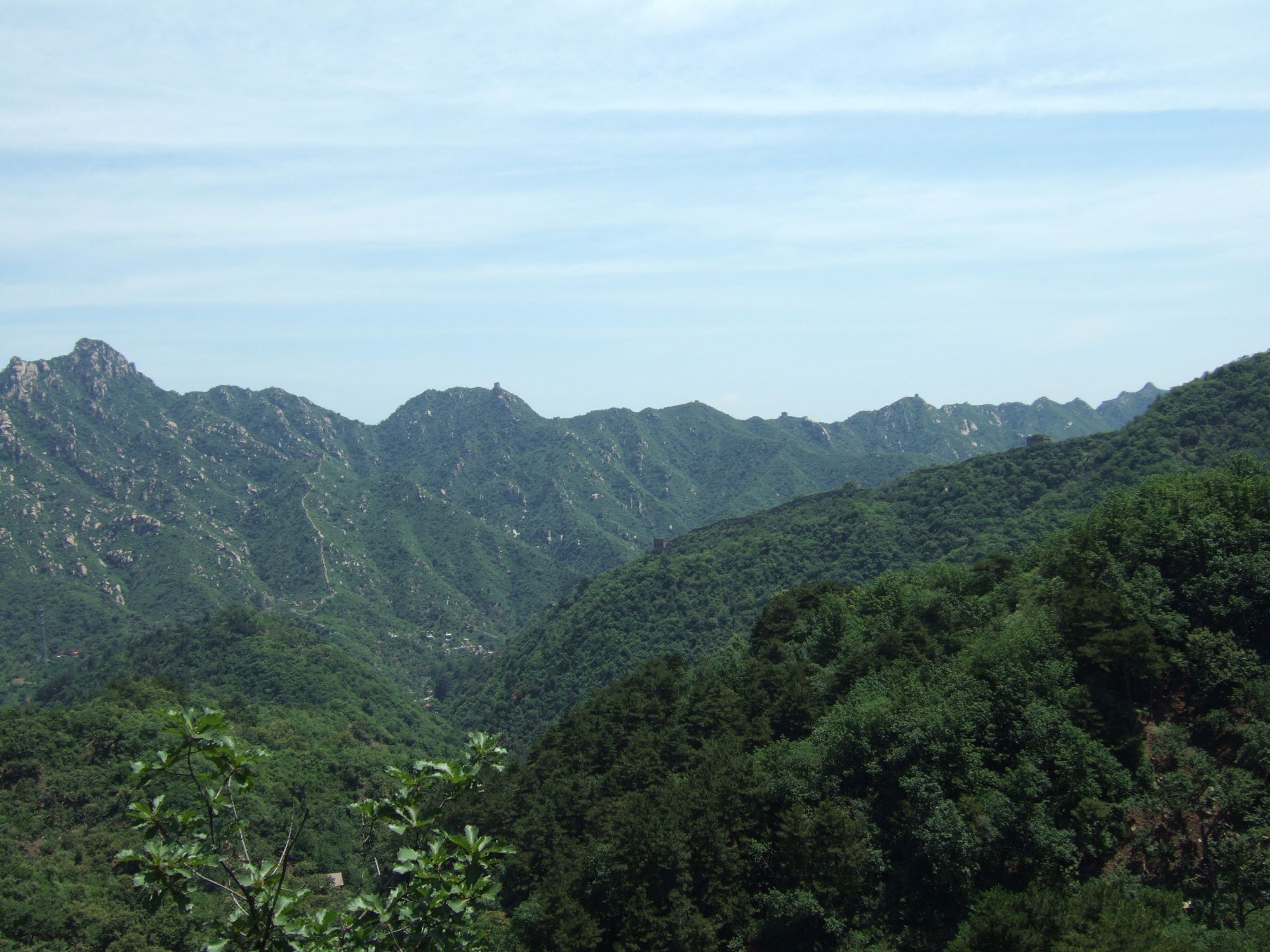 (If you look carefully at the top ridge in this photo, you can see some of the Wall towers - it really is a hike to get up there!)

David, as a well-adjusted 8 year-old, was actually much more excited about going DOWN the Wall, because that involved a toboggan. (And the correct and fun use of gravity! In your face, silly live-action Mulan villains.) 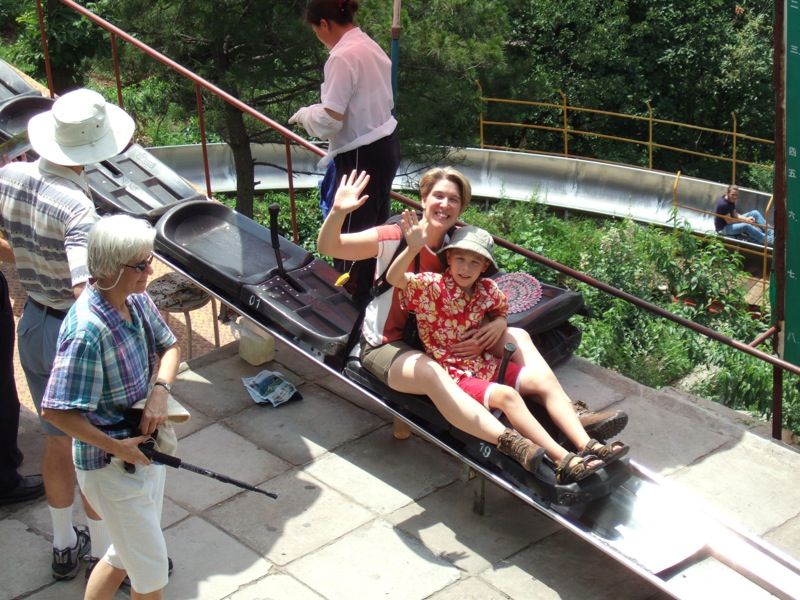 (Yes, I did dress David in the most 'noisy' and colorful outfits I could find while we were in China. Do you know how many people there are there? And how easy it is for an 8 year-old to get lost in a crowd?? In a perhaps-related note, David hasn't worn anything brighter than navy blue since then.)

Turns out, it's a good thing I became a Real Man when I did, because not two weeks later, I was standing on the north shore of Siberia's Olkhon Island looking over Lake Baikal towards a mountain shrouded with mist, and our guide was explaining to us that this particular mountain was sacred to Buryat men - in fact, it was so full of male energy that legend proclaimed DEATH to any Buryat women who looked at it and VERY BAD LUCK to any non-Buryat women who were so bold. (These warnings were quite similar to the ones given at the extremely gender-specific male/female water sources that we had visited a day or so earlier, and which I had also happily ignored.) If I hadn't already acquired RMS (Real Man Status), who knows what might have happened to me?! 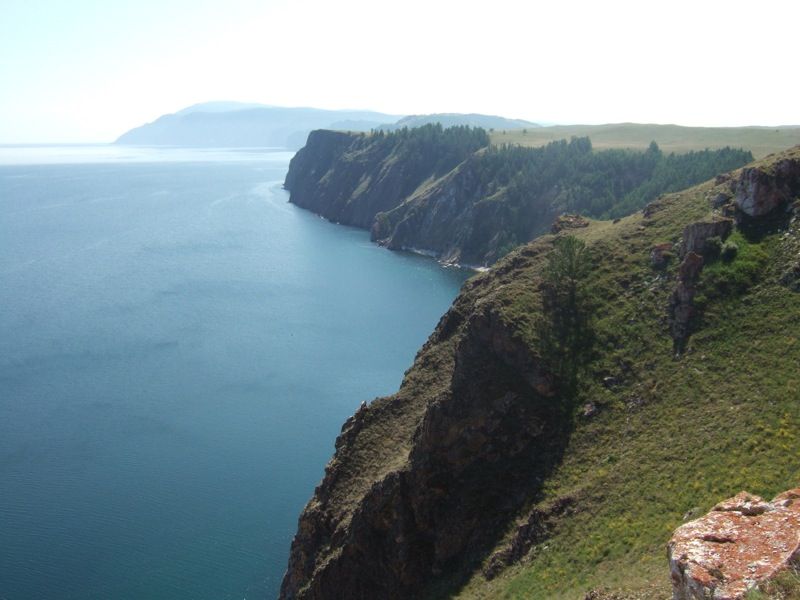 (The mountain in question is the shadowy one to the top of this picture. Our guide assured us that photos would not transmit the bad luck or, you know, death.)

Just to be on the safe side, though, I became a Real Man again later that same afternoon. This time, it involved completely submerging myself in Lake Baikal. There's a legend that Baikal's waters have magical properties: if you dip one hand in, you gain an extra year of life; if you dip one foot in, you gain two extra years of life; in you dip your whole head in, you get five years. And if you submerge your whole body, you either gain 25 years or die immediately - but either way, our guide assured us, you would die a Real Man. The water was fricking freezing, so I was going to content myself with a hand and foot dunk, but then our expedition driver, Vasa, dared me to go completely under, and I was already Far Too Much Man to chicken out on a dare from someone who drove this van around the island without regard for such petty conveniences as ROADS: 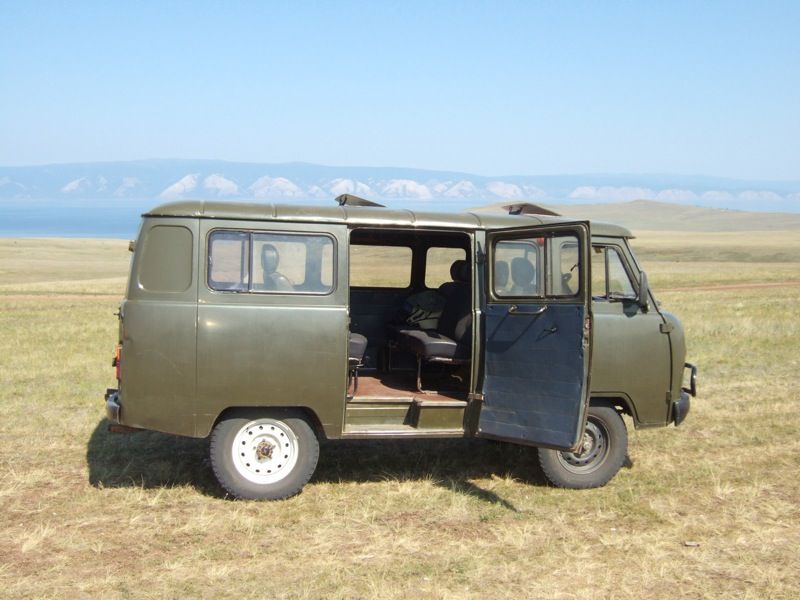 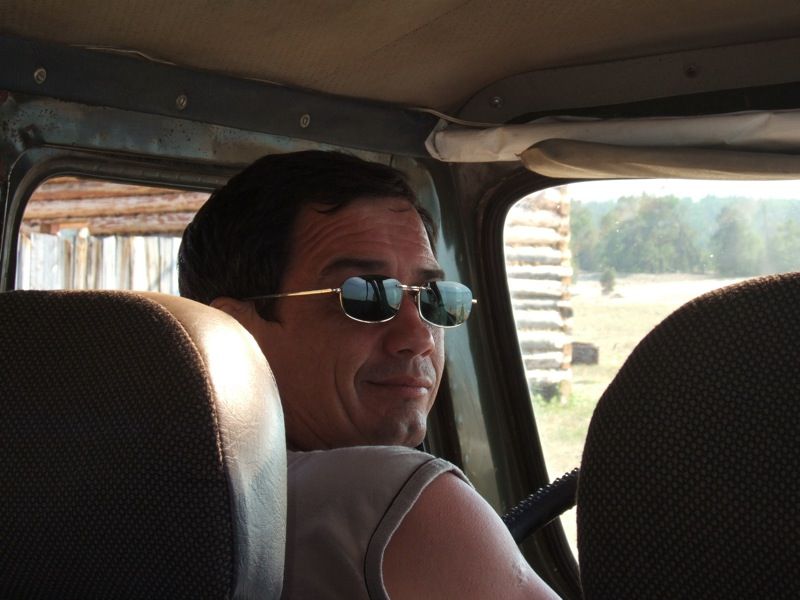 Drawing deep on my Michigander heritage, where numb feet and blue lips are just signs of summertime at the Lake, I took the plunge. The elderly Russian couple who were our excursion buddies for the day were very impressed and gave me a shot of vodka from their flask to warm up. So did Vasa. That really helped the picnic lunch of fish soup with more fish and bread and cucumber-tomato-yogurt salad go down easier, although David took this picture of the food rather than eat it himself: 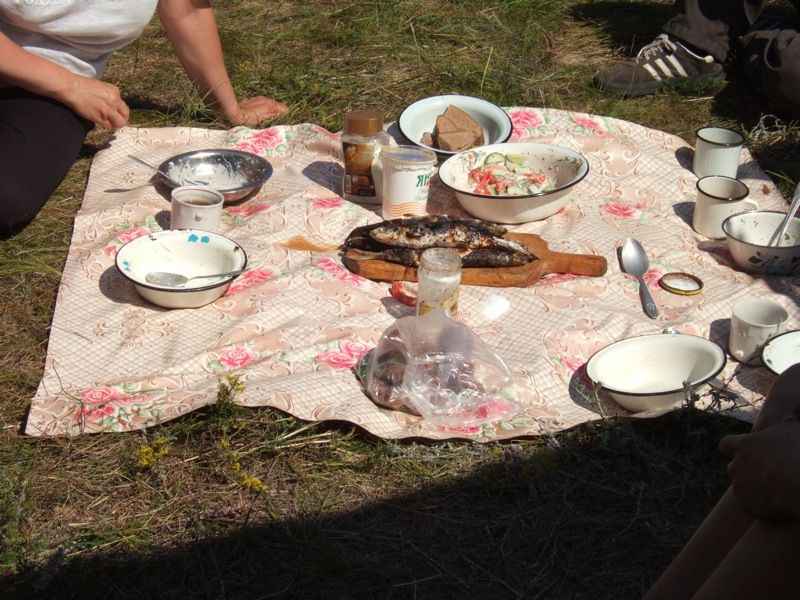 (Poor fish-hating David's saddest moment in the whole trip came the next morning at breakfast, when instead of hot grain cereal, we were served bread...WITH FISH BAKED RIGHT INTO THE MIDDLE OF IT. Fortunately, that was also the day that we found the place that served home-made ice cream.)

So now I was a Real Man two times over! And I felt so...TOTALLY THE SAME!!

Perhaps I wasn't at a high enough Real Man Level yet to feel the full effects of such mythic status? Just in case, both David and I leveled up one more time in Mongolia before we headed home that summer. Or, rather, we both leveled up 2/3rds of a time more.

After leaving Olkhon Island (about which I have one more story to tell, next week), we took the Trans-Siberian Railway to Ulaanbaatar in Mongolia and spent a week at an eco-camp in a 'ger'. (Apparently 'ger' is Mongolian for 'yurt'? All I know is that we were NOT allowed to refer to our dwelling as a yurt.)

Mongolia has three "Manly Arts" or "Games of Men": archery, horseriding, and wrestling, which are famously celebrated at the annual Naadam summer festival.

Here's David in front of the camp, thrilled to be practicing his "archery": 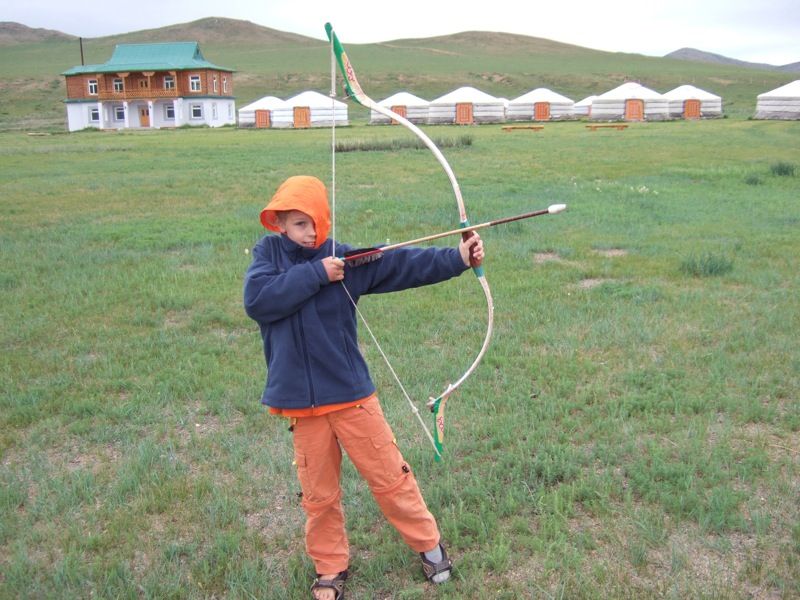 (The mostly teen-aged work staff spent most of their time draped over various pieces of furniture looking extremely bored; they would all come out to watch David and me shoot arrows at an ancient sheepskin and laugh and give tips. They also seemed to be genuinely shocked that David didn't already know how to shoot a bow and arrow at age 8.)

Here's me, poking my finger through the hole my arrow made in the sheepskin as it shot straight through. Robin Hood or Maid Marian I'm not, but at least I've met qualification 1 of 3 for attaining Mongolian Real Man status: 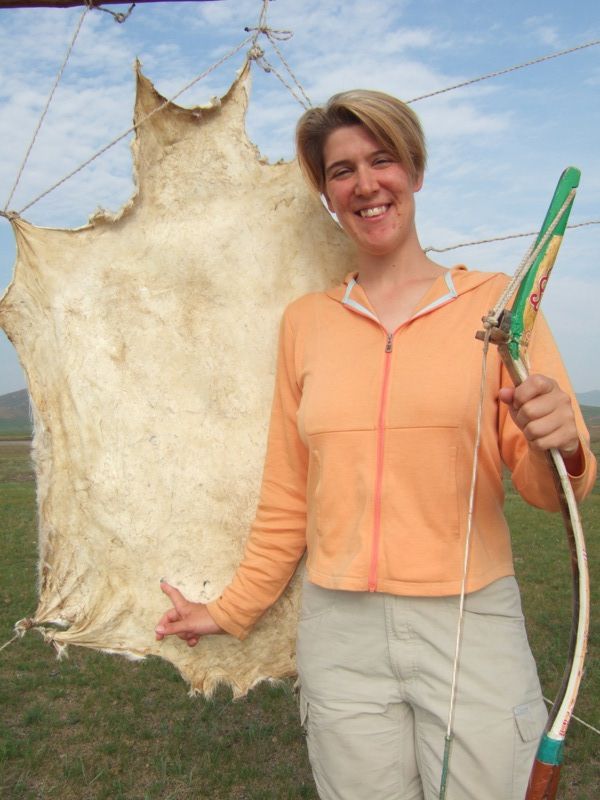 Qualification 2 was horse-riding, which would have harder NOT to meet during a week in the Mongolian steppe. David loved "our" horses, which were definitely the right size for him, whereas the smaller size of Mongolian horses meant that I spent the next few days wondering how there could be so many muscles in my rear end of whose existence I'd previously been entirely unaware. Here we are prepped for a ride through the hills looking for endangered argali sheep: 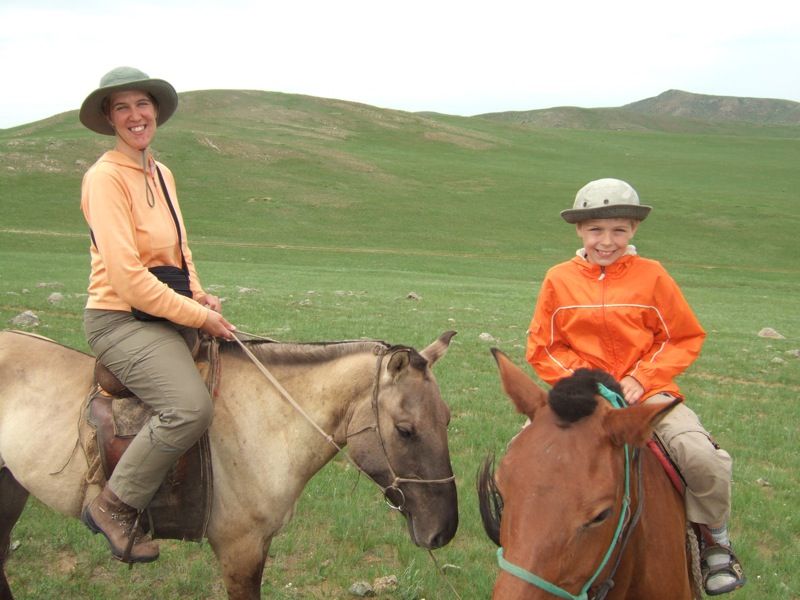 Qualification 3 was wrestling. Were there special outfits for wrestling? Yes, there were. Were they available to people staying at the eco camp? Yes, they were. Did I suck it up and participate in the last of the Three Manly Arts to be able to claim I was a THREE-TIME REAL MAN??

I had exerted myself. I had proved that I was 2.666666666666(repeating) times more manly than most. And at the end of the day, what's more Real Man-ly than knowing when to stop?