This is the sixth and final installment of stories about the time I took my 8 year-old child to Siberia with me, and especially attentive readers may have noticed that I haven't mentioned talking to anyone at home during our trip. That's not an accidental oversight - from the moment we left the airport in Beijing until we found an internet cafe in Ulaanbaatar, we had absolutely no contact with anyone not also in Siberia.

Let it be known (particularly to my mother who, as I mentioned in the first installment, has raised worrying to a form of high art) that this was not for lack of trying! I had decided not to take my laptop with me for the month we were going to be trekking around because I didn't want to have to worry about it getting lost or stolen or - let's be serious - smooshed in (or out) of my backpacking backpack. So that meant a month of communicating only via publicly available computers. In China. And then Russia. And then Mongolia.

China actually turned out to be the easiest place to find internet access - probably because we were in Beijing and not the Chinese equivalent of, say, Siberia. Here's a photo of the Red Lantern Hostel, where David and I stayed for a week after the conference I'd spoken at; it had a computer that you could sign up for time at if you paid the internet access fee first. 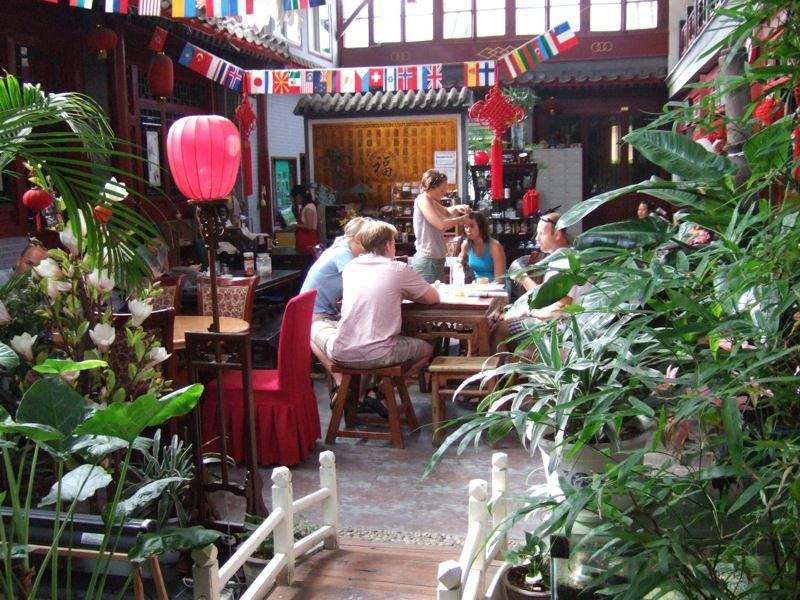 I'd hoped to find a place to send my mom a quick email when we were in Irkutsk, but no luck. The hotel we stayed at was supposed to have a computer you could use for 'business purposes' like email, but it didn't work. (We never saw anyone who could have given us the relevant codes anyway. If we hadn't met that ex-pat private investigator looking for Anastasia, I have no idea how we would have contacted the hostel on Olkhon Island.) I was crossing my fingers that the hostel would have a public computer I could use, but no such luck. Just lots of cows. And gorgeous scenery. Often in conjunction, like this: 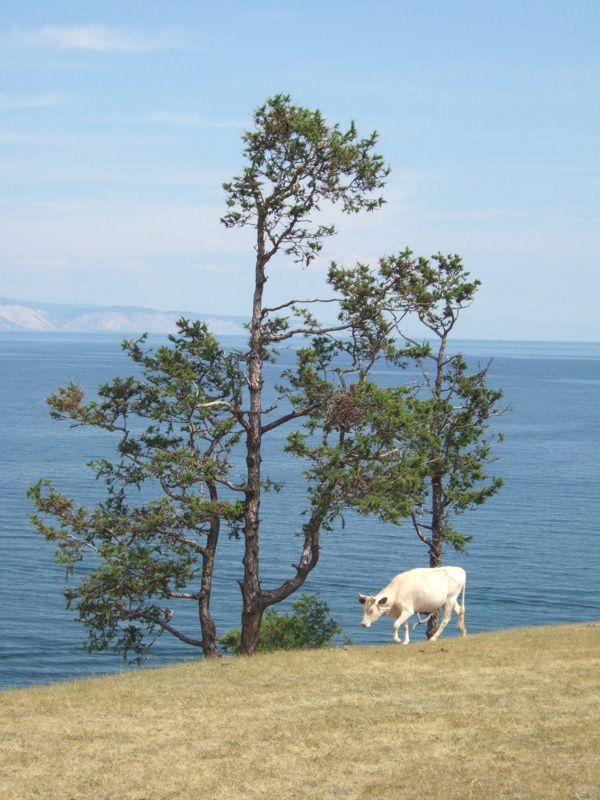 And then, about five days into our stay on the island, David and I were wandering around the main drag of Khuzhir, eating homemade ice cream and checking out the tiny local museum (because why even go somewhere if you're not going to check out the local museum?!) when we saw this incredible sight: 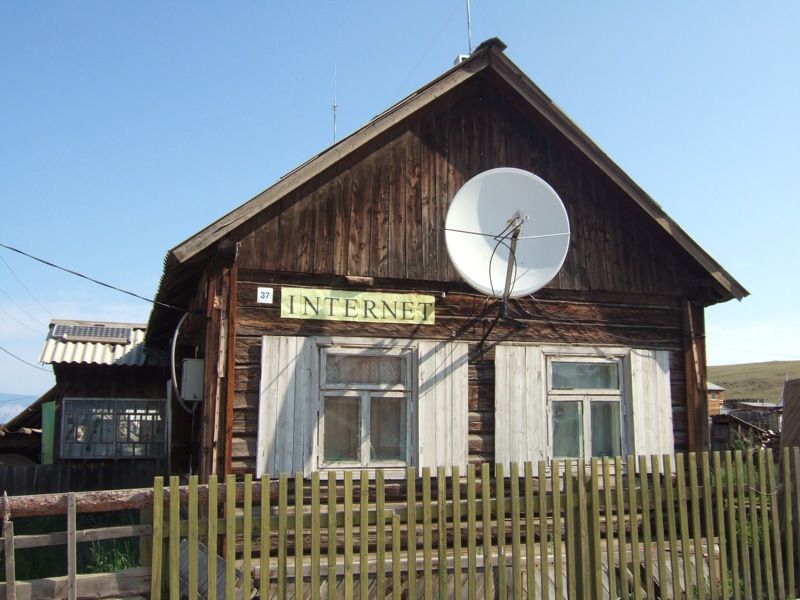 INTERNET??? This was not an opportunity we could pass up. I know my mother; each day that went without word from us was undoubtedly bolstering her belief that I had fallen off a cliff, leaving David to end his days wandering around the Siberian taiga bereft and alone. (In retrospect, perhaps what kept me going in various tight spots was the burning desire to prove my mom wrong. I'm just noble like that, I guess. Also, thanks for the motivation, Mom! I love you.)

We knocked at the door. It was answered by a young girl who didn't speak any English, so I used basically all the Russian words I knew in the following sequence: "Pozhaluysta, internet? Spasibo!" (For those less fluent in that noble tongue, that means "Please, internet? Thank you!") I then, of course, wasn't able to understand anything that the girl said in return, but eventually a combination of sign language and charades led me to believe that "Grigori" was the person in charge of the internet, and that he would be home after 6:30pm.

At 6:30pm, David and I were waiting at the door. There wasn't a whole lot to do on the island once you'd wandered the shore, played ping pong in the hotel common room, watched a group of British tourists come through with a 'certified shaman' to learn about "Magic Olkhon", climbed the sacred rock after the tourists left, visited the local museum, gotten ice cream, and gone on all the day-trips the hostel offered.

(Here's a picture of the British tourists and their 'certified shaman', which I keep putting in quotes because I thought that description was so hilarious:) 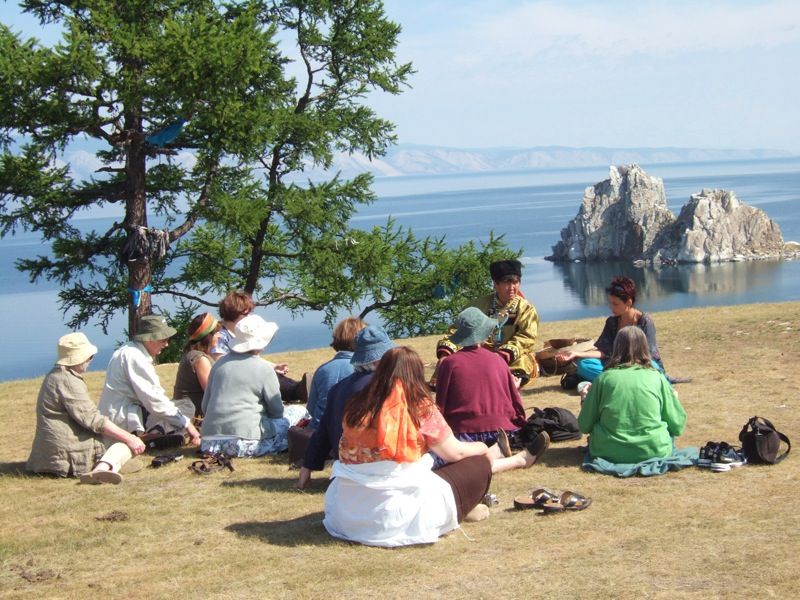 This time, Grigori answered the door and welcomed us in. It turned out that this was not an internet cafe, as I had assumed. It was just this dude's home. For 25 rubles per 5 minutes, you got to use the ancient computer he had in the corner of his living room, while his wife cooked dinner and his small kids played on the floor by your feet. (It wasn't awkward in the slightest, why do you ask?)

The amazing thing about having the same email address for the last 20 years is that I still have those messages. Here's how the only message that loaded in the excruciatingly awkward 25 minutes we spent at Grigori's house started:

"I'm sure you've heard of the plane crash in Irkutsk yesterday. I'm glad you weren't on it! If you had been, how would we know? Do you give them
emergency contact numbers when you board?"

Alas. It was another five days before the Trans-Siberian Railway deposited us in Ulaanbaatar and we'd wandered the streets until we found an actual internet cafe with a connection that let me assure my mother that we were yet alive. (And yes, the airline did have our emergency contact information.)

But that journey is a story for another day! Here is a calming photo of the sunset the last night David and I spent on Olkhon Island. I took this picture from the very top of Shaman Rock, which we had climbed as David's last Siberian request, and which we didn't fall off EVEN A LITTLE. A peaceful week to you all, and may you all be blessed with people who love you enough to worry about your safety the way my mother worried about ours. :-) 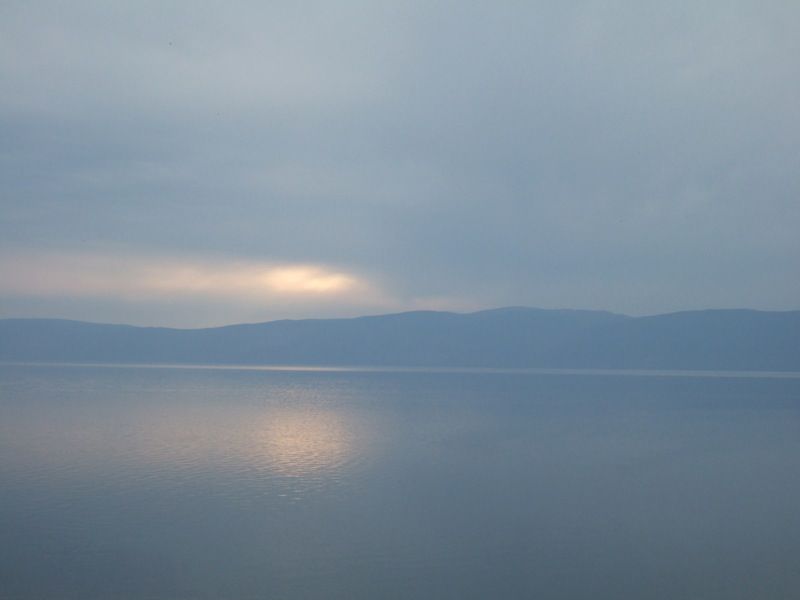