Early on in the March lockdown, I realized that I was going to go completely bonkers if I didn't find a creative way to handle being trapped in a one-bedroom apartment with my partner and my college-senior son. I should probably use a more neutral word than 'trapped', like "quarantined" or "sharing space", but why not call a spade a spade? We had it far better than many, but in 48 hours we went from a world in which Andy was flying back and forth from NYC every week to teach at his college, I was spending four days a week on campus teaching, and David was living in a college apartment with three friends - so much personal space! so much physical room!! - to a world in which there were suddenly three adult-sized people, all of whom were doing classes entirely via Zoom and YouTube, living in a one-bedroom apartment in which the only door that you could close all the way was the door to the bathroom.

To make things more intense, David was sick with severe cold-like symptoms when they closed campus; I bought what I hoped would be two weeks' of groceries on my way to picking him up, and we all settled in for a no-holds-barred quarantine. (This was still the stage where you couldn't get a Covid test in Michigan unless you were actively being admitted to the hospital, so we had to act as though David had it.)

Did you know that David snores? You probably didn't. I certainly didn't! He wasn't a snorer when I sent him off to college - I blame higher education for teaching him this new trick. Yet I quickly learned this fact and any number of others within a day of close quarters. It was like a crash-course on how my child had changed since he'd left for college, since he'd spent his summers living with his grandparents, as I was first living in NYC and then in an open-plan one-bedroom apartment that was definitely not designed for more than two people who really, really like each other.

When Andy and I had moved into the apartment on Heritage Hill straight from living on the Upper West Side, we'd been thrilled at how spacious it seemed: it was the first time Andy and I had lived together alone, and we made creative use of the space, turning the small back room into a library/study for Andy (I, of course, had my office on campus available to me any time at that point), making the dining room our living room, and the front 'sitting-room' our bedroom. It was lovely! And very, very open. 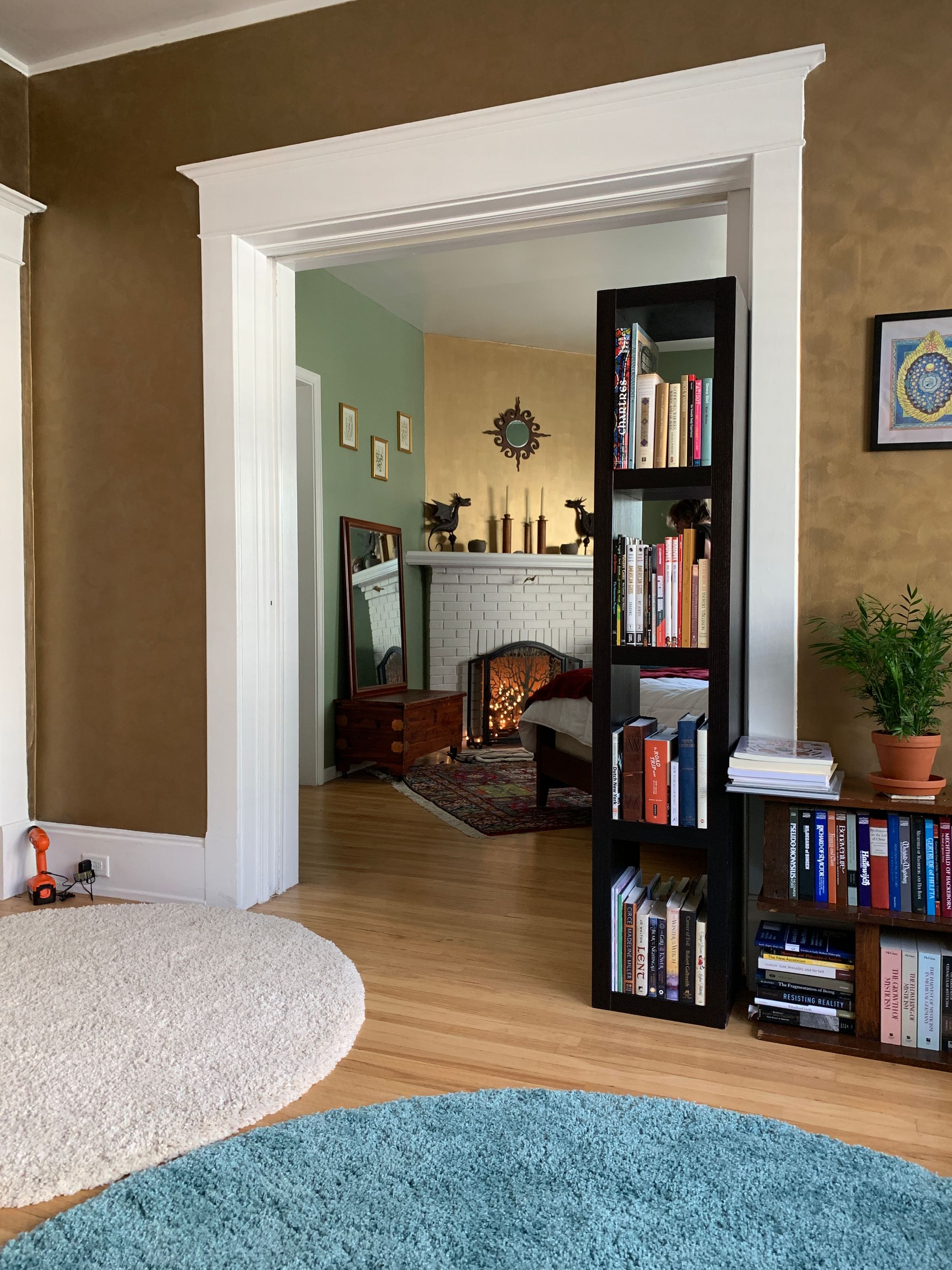 (View from the couch in the living room looking into our bedroom. Note the beauty and also the total lack of privacy.)

Right. So there the three of us were, cheek by jowl (as they have apparently been saying since at least 600 A.D.) with no end in sight. Actually, we were actually moving into a proper house on June 1. But as the world found out, the eleven weeks from mid-March to June 1 constituted a small eternity. And so I instituted what I call the "Make a Visible Difference" program.

The rules of Make a Visible Difference are very simple: once a day, you have to do something that makes a positive visible difference to your immediate surroundings. The bar for what counts is incredibly low: showering counts. So does washing the dishes, cooking something lovely, doing laundry, embroidering, and wearing something colorful. Writing a blog post counts, which is one of the reasons I've picked that back up. One day, Andy made a Zoom-calendar for the study, and it was a smash Visible Difference hit.

What's been interesting to me is how effective this one small thing has been in making me feel like my life isn't completely falling apart. I mean, my life IS kind of falling apart. Since the pandemic hit, I've lost the job I held for twenty years and am facing financial and professional uncertainty in ways I never expected. Cool new opportunities are already starting to find me, but the future is less clear to me now than it has been at any point in the last quarter-century. My partner's job is in Brooklyn, and at some point they'll start having in-person classes again. Will we move back to the NYC area? Will I get another academic job? Could I make it as an independent scholar if I wanted or needed to? What's the best way for me to use my gifts for my own flourishing, my family's flourishing, and/or the greater good of my communities?

There's no way for me to answer any - much less all - of those questions right now. And so I take comfort in making one positive visible difference in the world around me each day. Sometimes I even make TWO! But all I'm requiring of myself is one. In fact, when I start going all-out and doing a whole bunch of things at once, David - who can be annoyingly insightful and compassionate with me when I'm not being insightful or compassionate towards myself; how on earth did he learn to do what I say and not necessarily what I do? - usually tracks me down after and suggests that I perhaps back off a bit and rest.

The annoying thing is he's always right. I tend strongly towards the 'more is more!' approach to life, and my first (second, third, and fourth) inclination is to immediately fill the space normally occupied by teaching, advising, committee assignments, etc., with new sorts of work. In fact, since we moved into the house (all three of us, since David's currently getting unpaid internship experience before he applies to grad school), I've found all sorts of stolid home-owner-related tasks to throw myself into, like completely re-doing the laundry area of the basement - which required teaching myself how to lay down vinyl flooring and parget the cement walls. However satisfying it is to exhaust myself to the point where I can't think any more, though, I've come to see that the upside of this quiet time with no employment and intense travel restrictions is that I have space to play with finding a new balance in my life.

When I can't find the balance and feel like I'm starting to spin out, I take a deep breath, sometimes a nap, and then I make a visible difference. Yesterday it was making pumpkin bread. Today it's been cleaning out the garage with Andy and writing this post. I don't know yet what it will be tomorrow. But as the weather grows colder, Covid rates increase, and we start hunkering down again inside, I find that I can think about tomorrow more often than not with wonder rather than anxiety. I wonder what I will do tomorrow to make a positive visible difference to the world. I wonder what I will do the day after that. But for one of the first times I can remember, I don't feel the need to know. I'm taking it one visible difference at a time.