Next Travel Tuesday, I will actually be traveling! In honor of my Panbattical Lay-off Extravaganza and my only child's finishing college during a pandemic - which leaves both us with, shall we say, 'unencumbered' schedules - the two of us are going to take a 10-day roadtrip through some of the lesser-known (to us) National Parks. We've driven near or through many of them before, but always on our way to the mountains. This time, we're building a whole trip around "just" the Badlands and Wind Cave National Park. There will be nothing but miles and miles of waving grass, open sky, and cool rock formations. A week from today, we'll be in a cabin so remote that it doesn't even get cell-phone reception.

All this to say, no new post next week, and this week's post is all about the last time the two of us spent a whole week off in an open land of, well, waving grass, open sky, and cool rock formations: Outer Mongolia.

Last week, I was telling stories from our ride on the Trans-Siberian Railway, which we took from Irkutsk to Ulaanbaatar. Our first impressions of Mongolia were not auspicious. That's largely because they were of Soviet-built train stations. First we stopped in Sukhbaatar, a city whose entire Wikipedia article is about how much it costs to leave it. 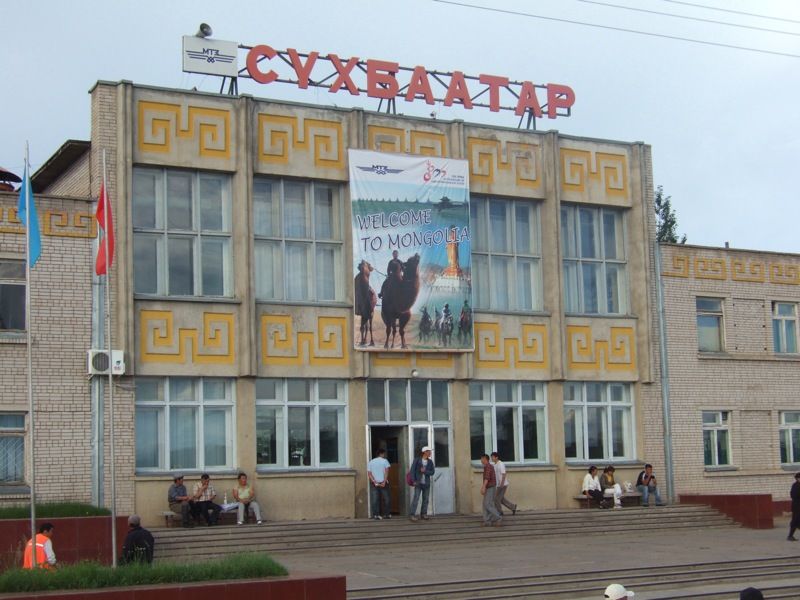 And then we disembarked at this massive cement edifice in Ulaanbaatar, which opened in 1949: 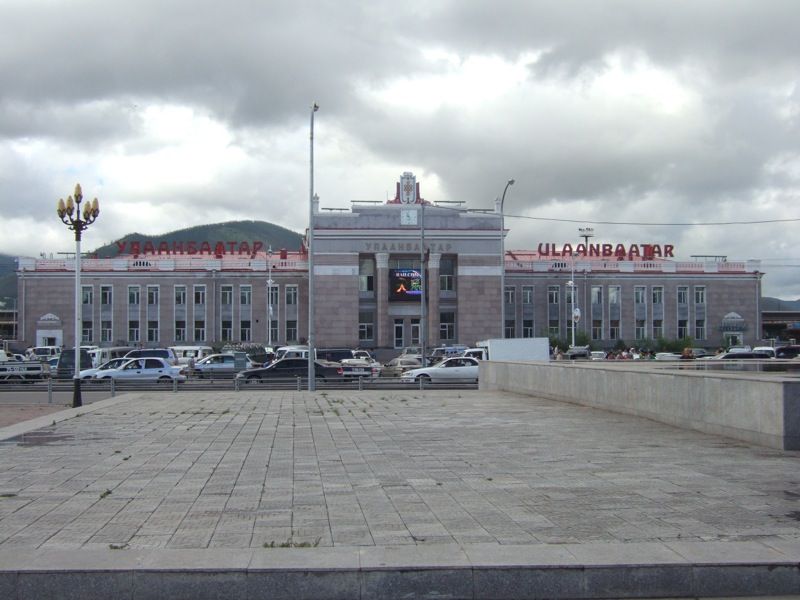 You might think it unfair to judge a city by its train station, and I would normally agree! But David and I never found anything more scenic in Ulaanbaatar than this: 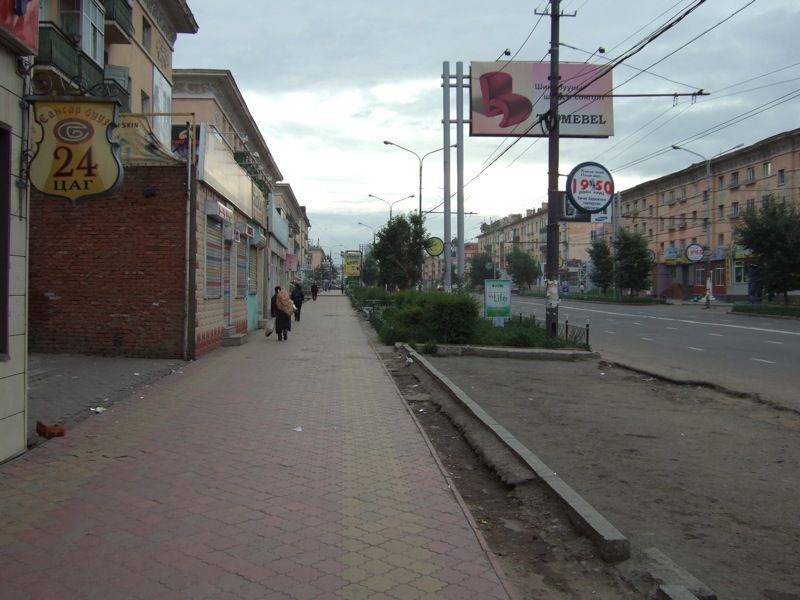 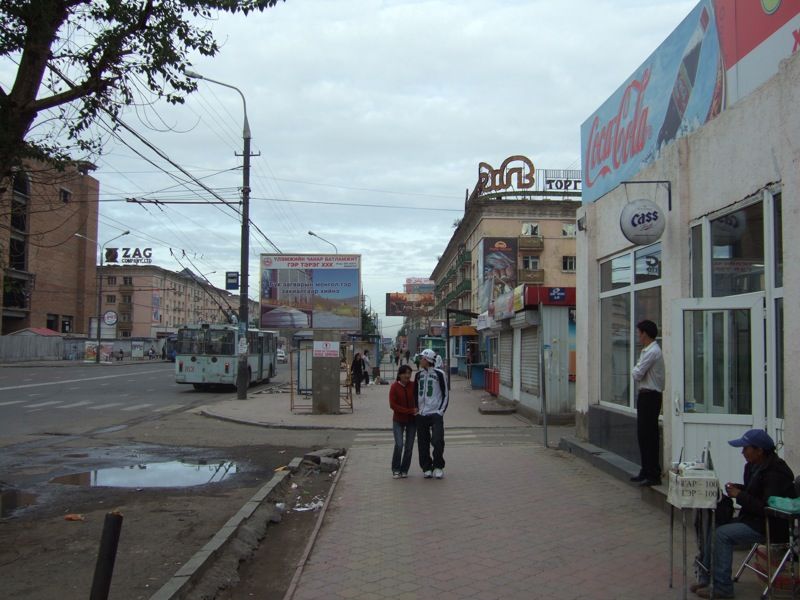 We kept feeling like we must be just a couple streets over from something really lovely and scenic and/or filled with civic pride or something. We even wandered around looking specifically for a public park or square, but the closest we got was a long cement block guarded by this cheerful cement fellow: 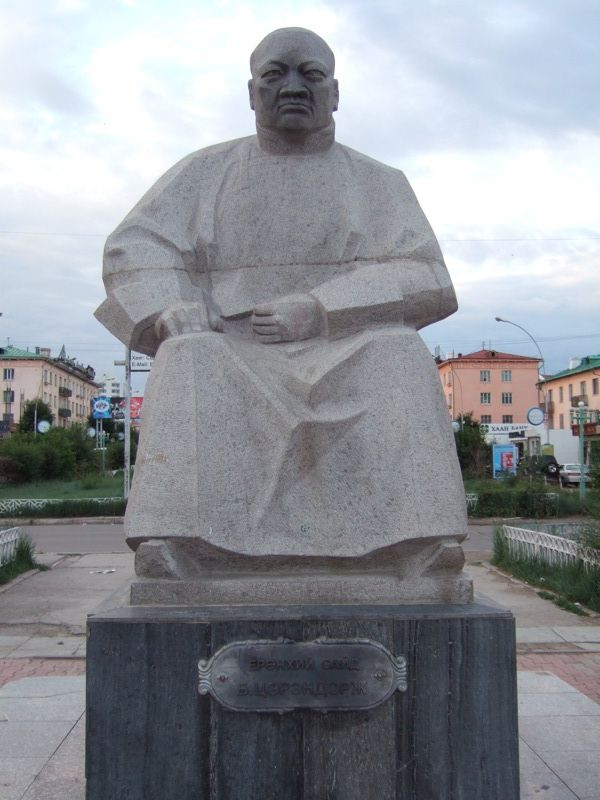 Turns out that if the Soviets decide they want you to have a city so you can be "useful" citizens, it's going to be hella ugly and no one is going to take pride in it. Go figure!

Fortunately, we weren't in Mongolia because we wanted to tour Ulaanbaatar. We were there because we wanted to visit the steppe and stay in a ger (the Mongolian term for 'yurt'). And the Steppe Nomads Eco Camp was everything we could have hoped for. Most of the rest of this post is pictures, because I could never capture the scale or feeling of the Mongolian steppe in words. 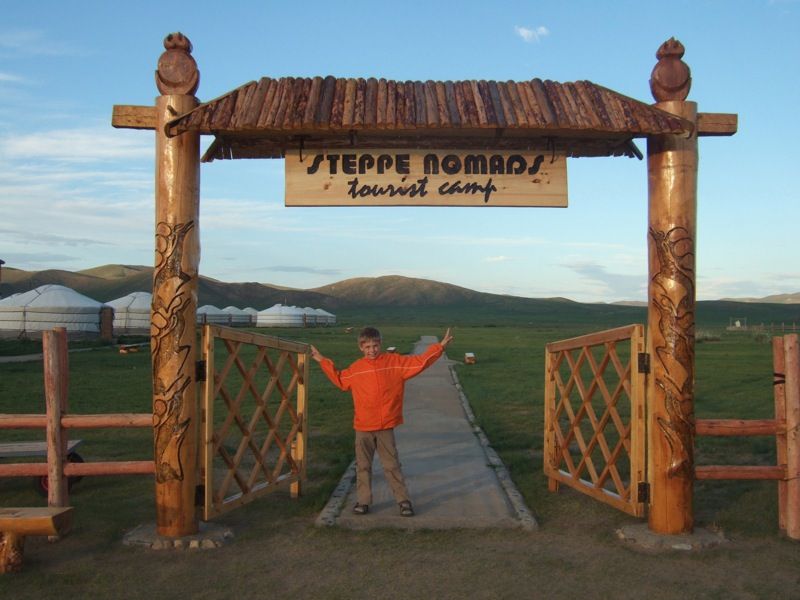 This was our view every morning eating breakfast, and then again for dinner: 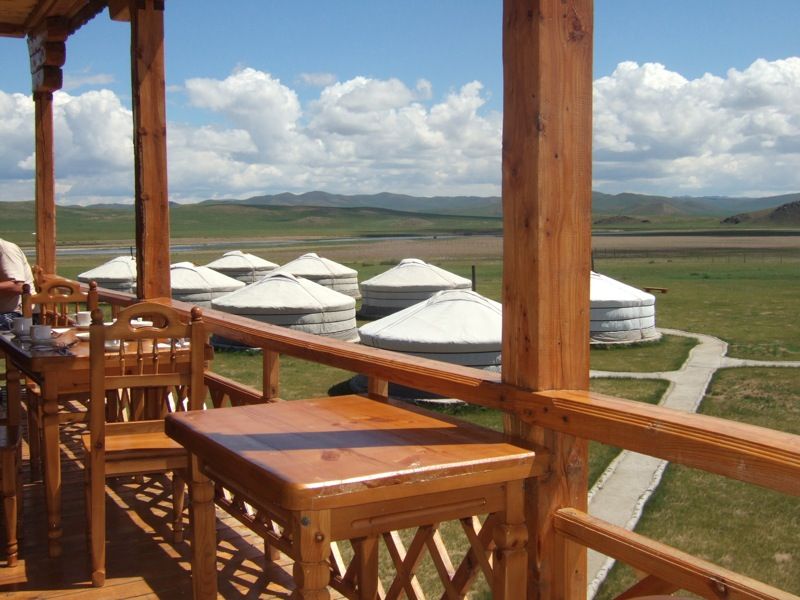 We had our very own ger, which gave David (and me!) no end of pleasure: 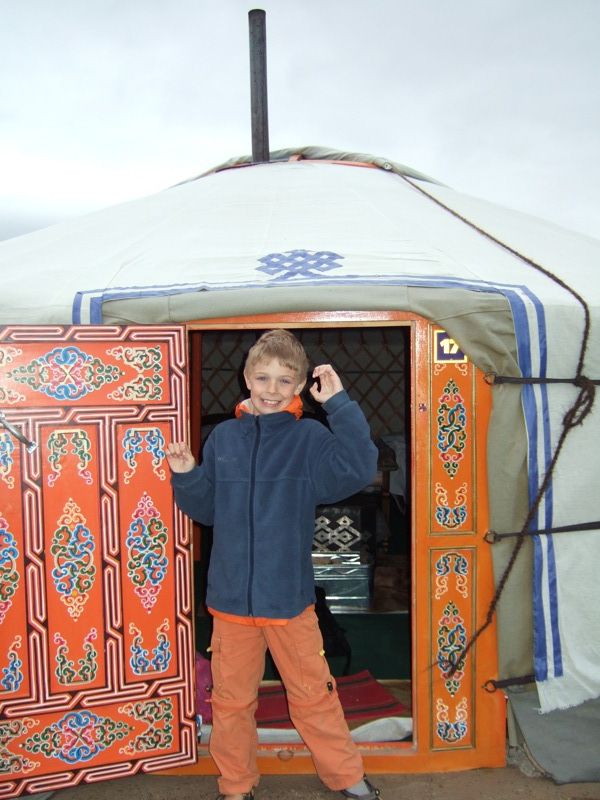 We spent sunny days hiking or riding horses - and quickly learned why you'd grow up on horseback here as opposed to getting places by foot. (We also practiced archery, but I talked about that in an earlier post, so you can go check out photos of us practicing the 'manly sport' here .) This is the view across the camp paddock towards the nearest hills. David and I decided to hike to the hills our first day - it took four hours to get there, under the sun with absolutely no shade or cover of any kind. 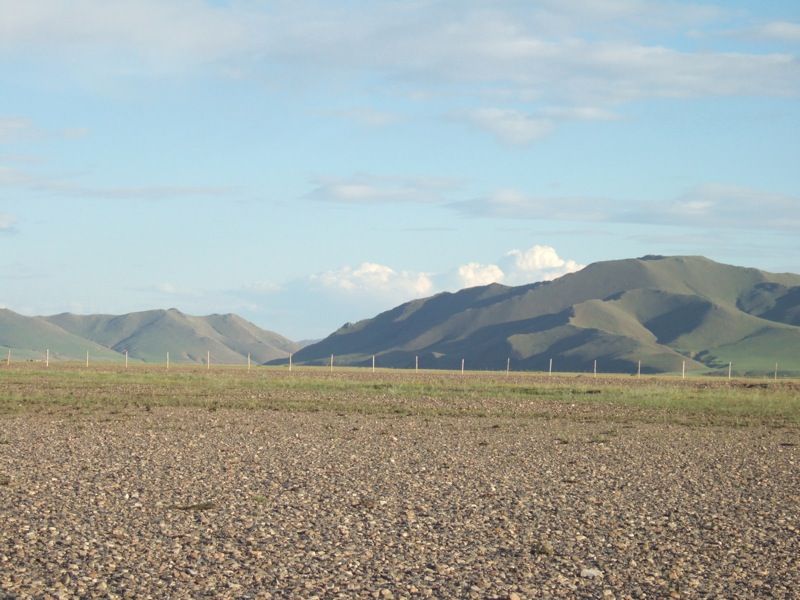 After that, we concentrated on hiking up nearby hills to get views like this: 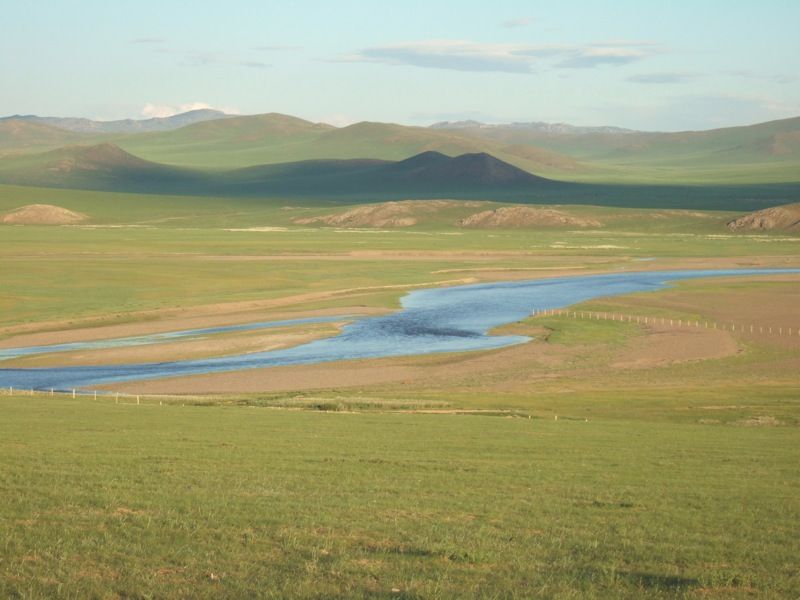 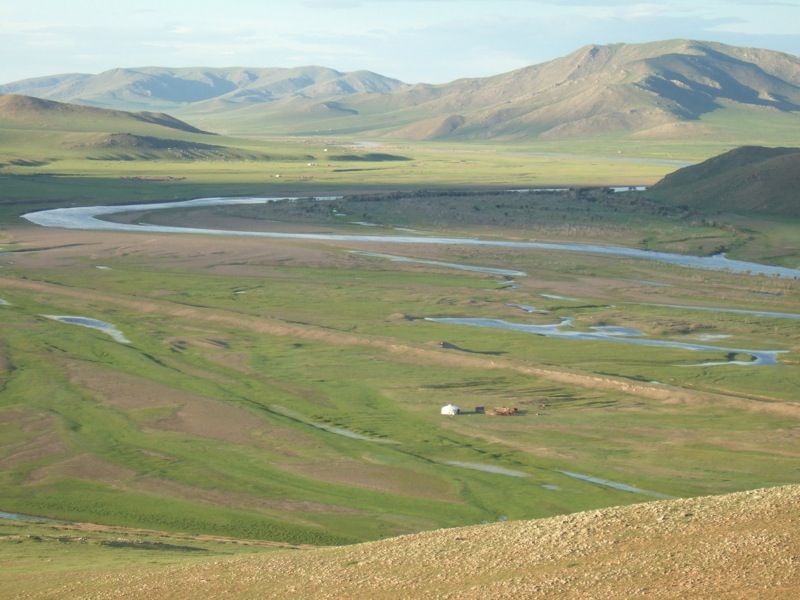 and this. If you look carefully, you can see the tiny white dots of nomad herders' gers. 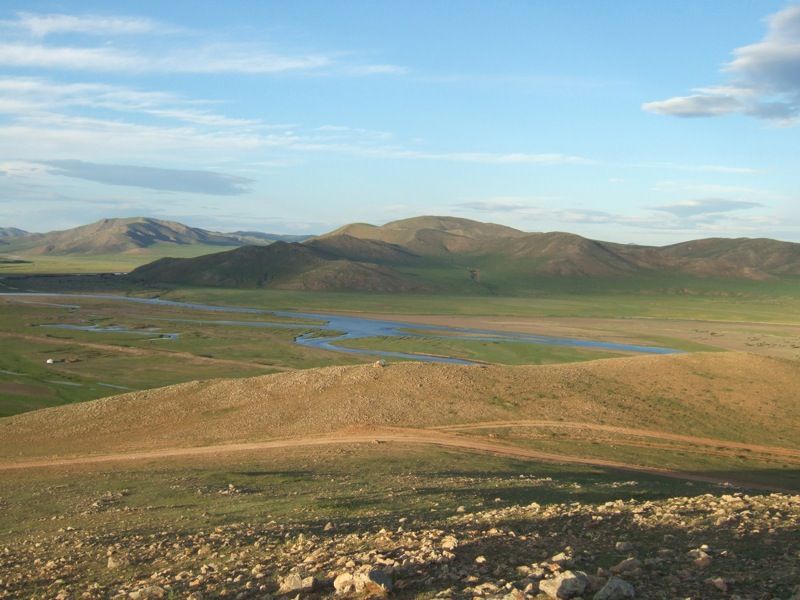 In contrast, our camp looked like the Big City! There was running water in the central building, and electricity at certain times of the day. If you asked them really nicely, they would even turn on the hot water heater so you could take a (very fast) warm (ish) shower. After the week-plus on Olkhon Island and then the train, a shower of any kind was a small miracle, and a warm shower was basically paradise. 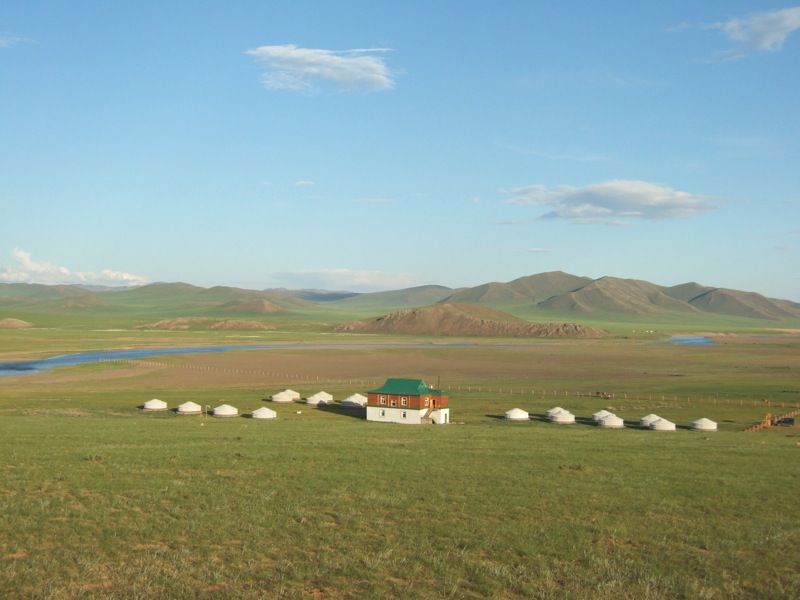 One of the things that I loved about the camp was that they contract with nearby herders for excursions; the 20 year-old guide who took me and David out horseriding a couple times was saving up money to buy more horses. 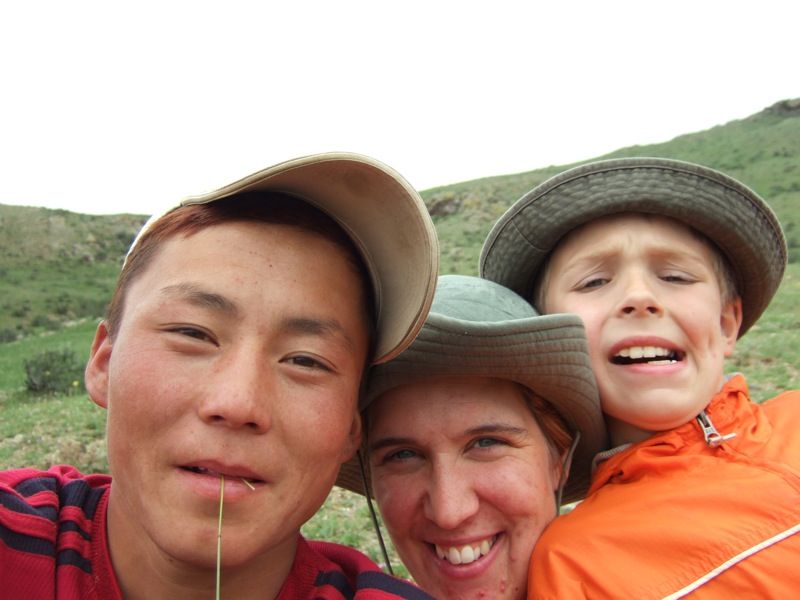 At this point in our month-long trip, both David and I were grateful for a place of total quiet and solitude. Or rather, ALMOST total quiet. David's sandals had completely given up the ghost. The front strap of one of them had broken, and the other sandal's inside fell out. Like, completely fell out, so that David was walking on the hard plastic grid that the insole was supposed to be attached to. This was, he told me, rather painful, but it's a little hard to get replacement sandals in the Mongolian steppe, so he spent the week running around with one sandal flapping around his toes and the other strapped over two socks for padding. I could hear him from anywhere in the camp: SWAP flap, SWAP flap... 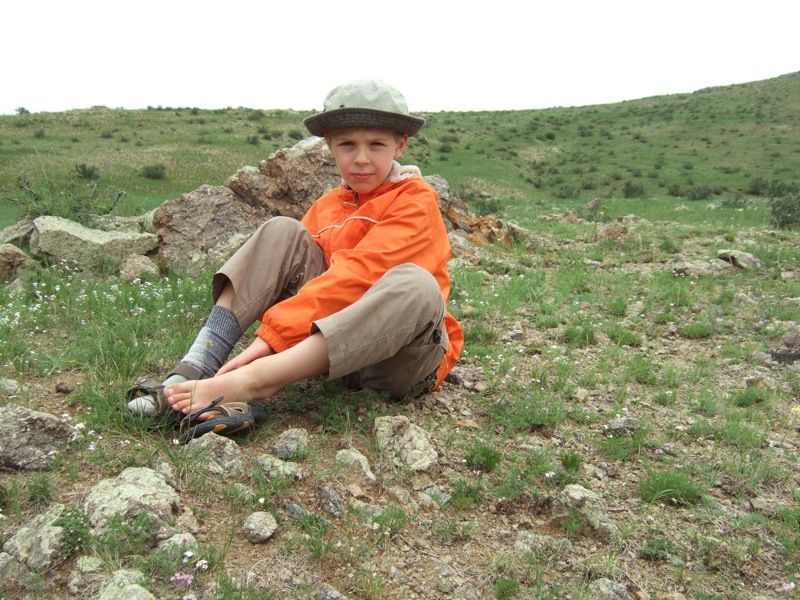 "Are you an idiot?" I hear you thinking. "Did you really only take ONE PAIR OF SHOES with you for your child for a MONTH-LONG TRIP??"

Of course not! The problem was that David was in the middle of a growth spurt, and he'd completely outgrown the sneakers I'd brought with us in the two weeks between when I bought them and when we got to Siberia. He couldn't even wedge his feet into them by the time we got to Mongolia. To his credit, he didn't even complain about running around with these... things... on his feet for two full weeks: 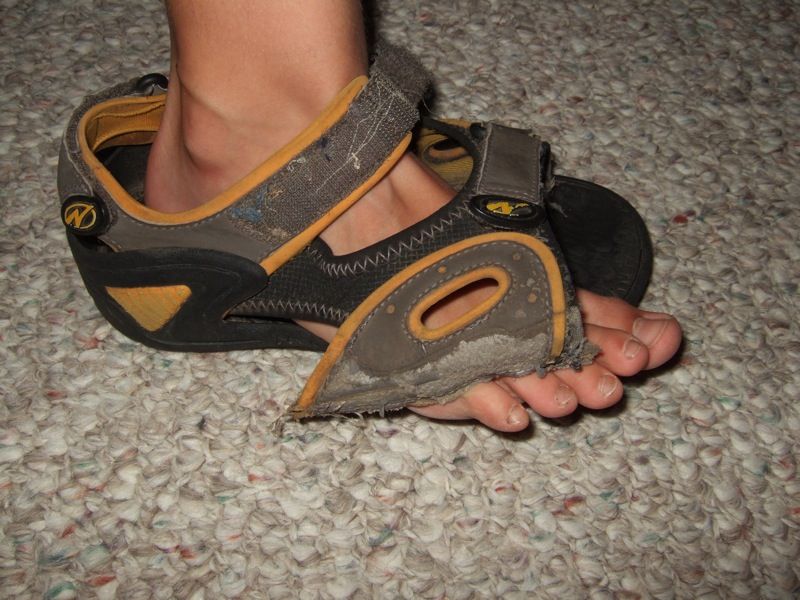 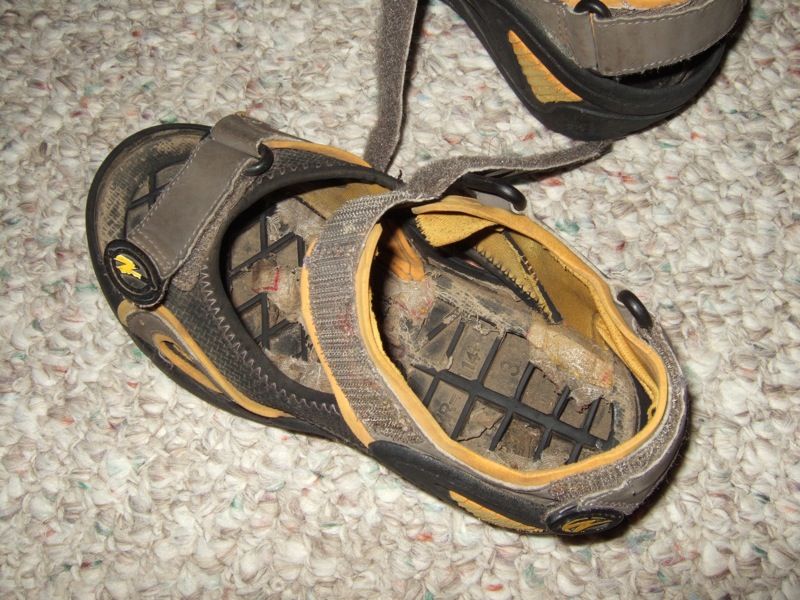 (I did get a lot of concerned-parent side-eye from total strangers, though, and even an offer from a kind British couple passing through the ger camp to give us money to buy him new shoes. Ah, total strangers...how you do like to co-parent!)

Anyway, our ger was the best: on cold and rainy days, we'd stay inside with our wood-burning stove and read. 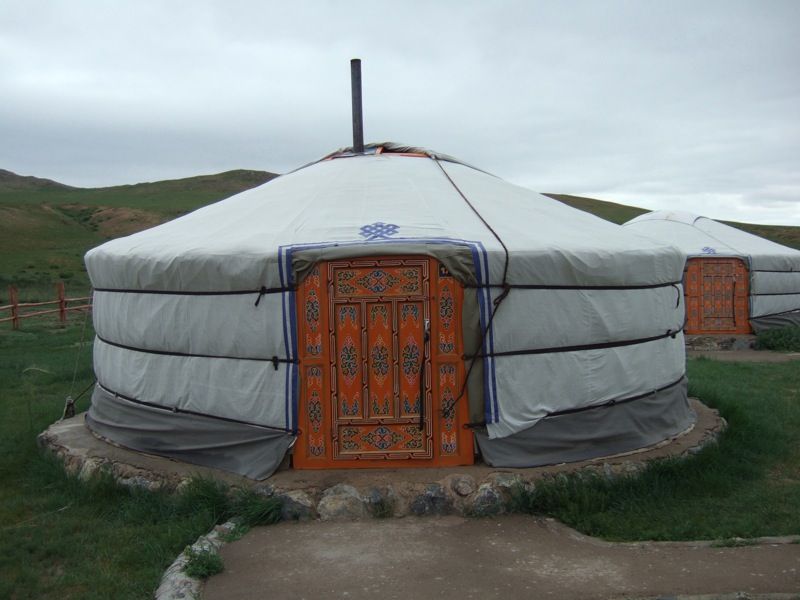 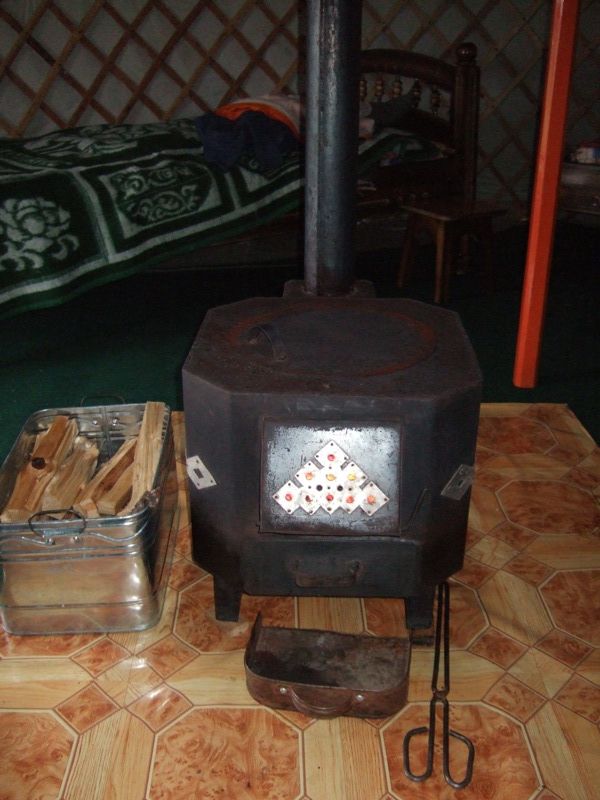 Usually the flap on the top of the ger would stay open for ventilation and a view of the sky, but they'd close it for us when it was cold and/or rainy: 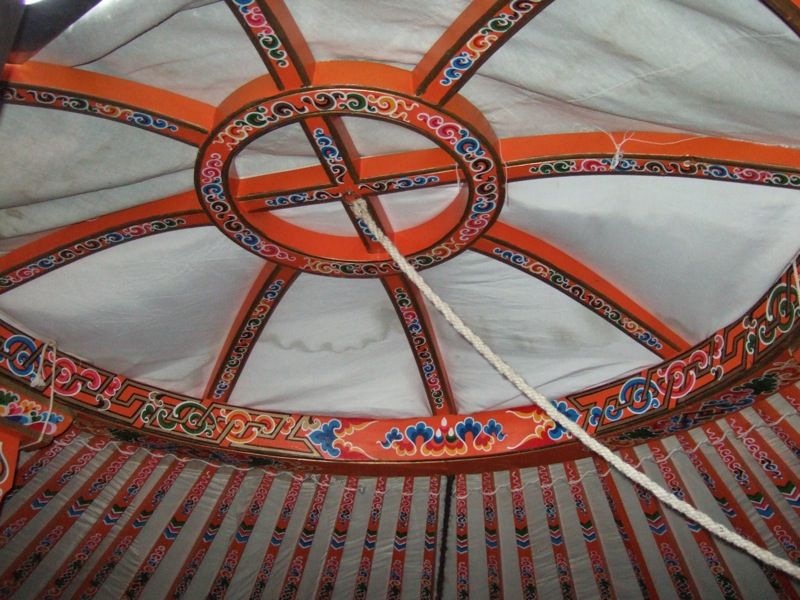 Here is a photo David took of me sacked out on my bed while he read Lord of the Rings. 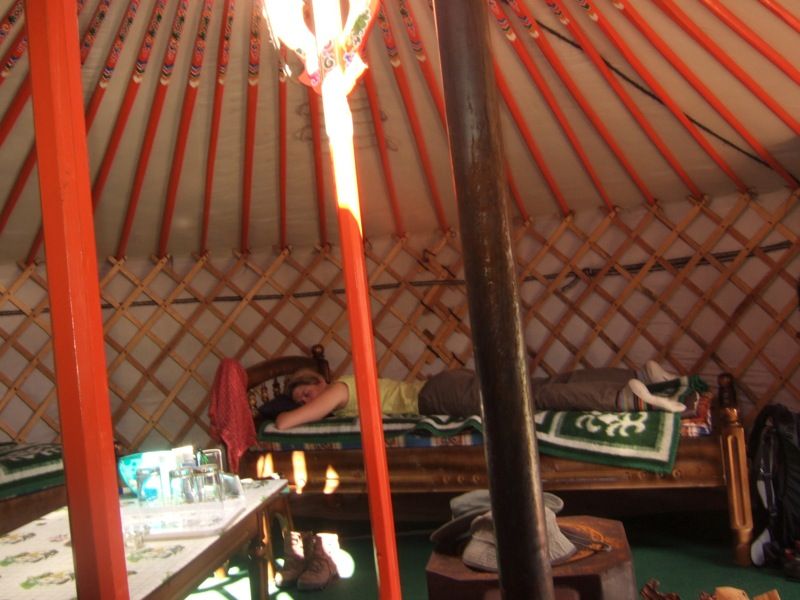 One thing photos can't capture is how a place smells, and I'm here to say that if they made a perfume that smelled like the Mongolian steppe, I would wear it every single day. We never figured out what herb or plant it was that smelled so good, but when we got on the plane in Ulaanbaatar to fly back to Beijing (and then home), I could still smell it on my hiking boots.

Speaking of the airport, when our week at the ger camp ended, we stopped for breakfast in Ulaanbaatar at a German-owned restaurant that catered to ex-pats and then used the very last of my cash to pay for a taxi to the "Chinggis Khan International Airport" (the quotation marks are because the airport has exactly one runway, which departing flights use in one direction and arriving flights use in the other direction). 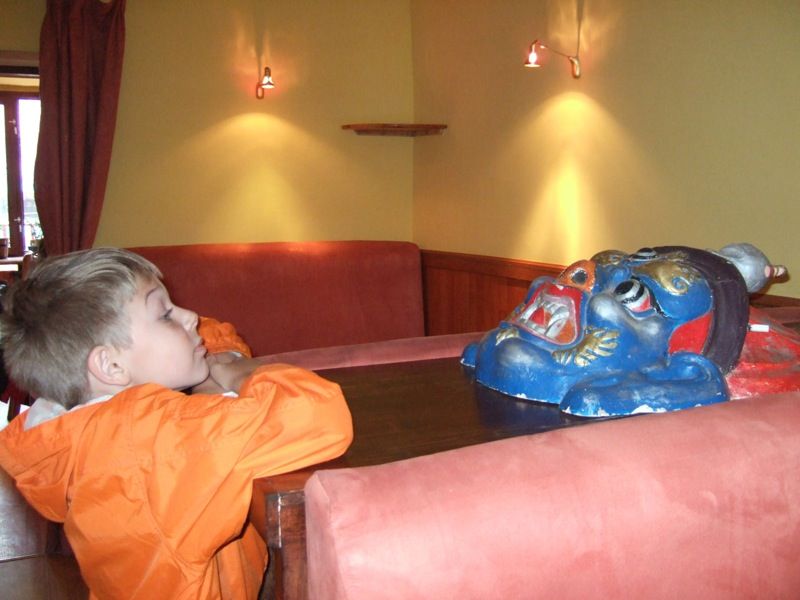 (This photo is from the German restaurant, which I mention because it had the first real coffee I'd gotten to drink in almost a month and also as an excuse to post this photo, which is one of my all-time favorite photos of David.)

2006 was the 800th year of the Great Mongolian State. We knew that, because there were signs everywhere telling us this, including the airport. (In fact, they'd re-named the airport after Chinggis Khan at the beginning of that year in celebration.) 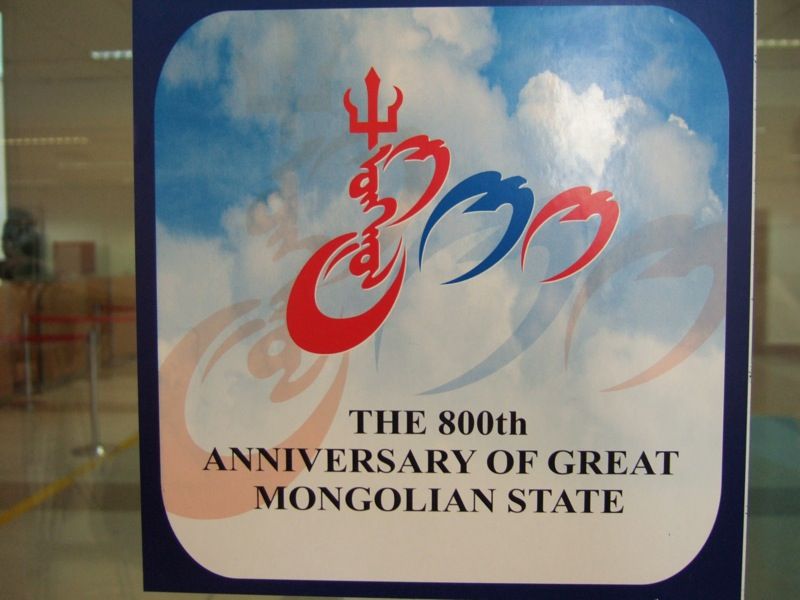 Chinggis Khan is the great hero of Mongolia, and David was fascinated by him, which led to him begging me to buy this beer while we waited for our flight: 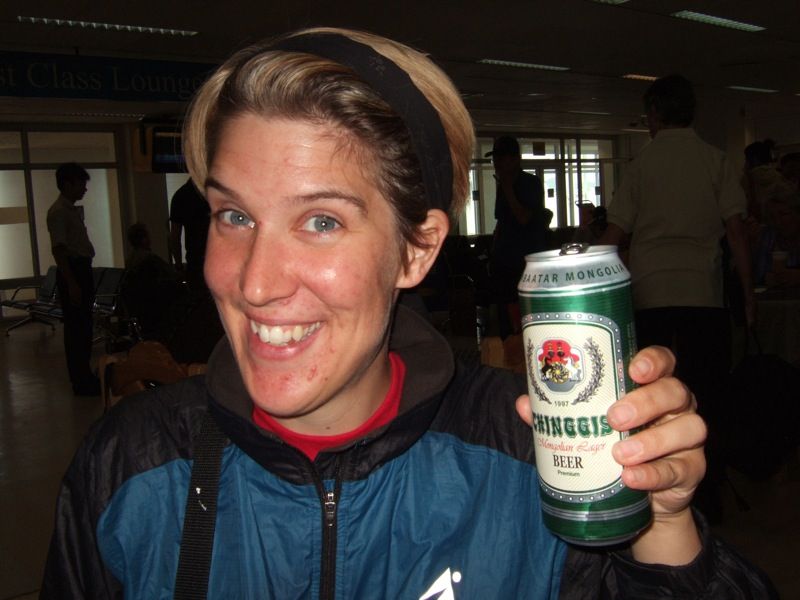 It's 11am here, and I was not in the mood for beer, but who am I to deny the wishes of a small child on the very final leg of our journey? At least I tried to look all "YUM!" about it. When I offered David a sip, I got this hilarious reaction: 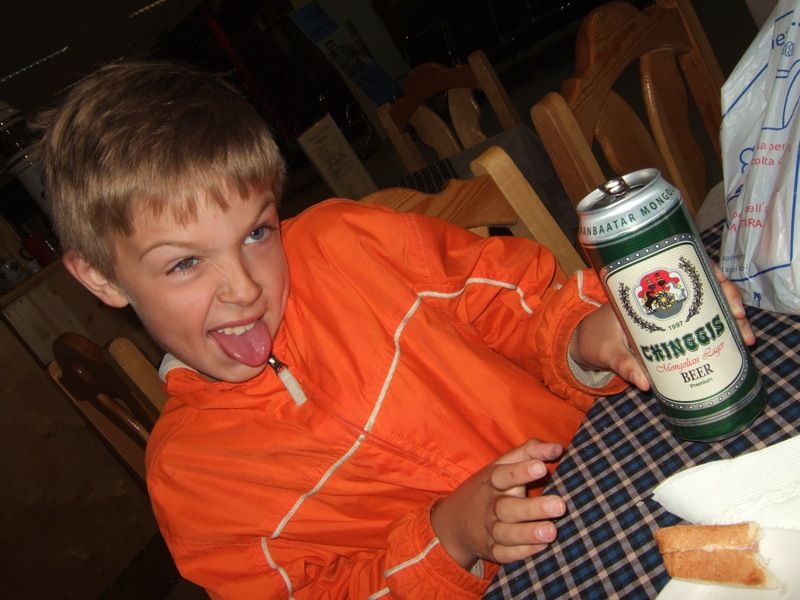 The very last thing we did before boarding our flight was to take this photo of David channeling his inner Chinggis, looking fierce despite (or because of?) the Mars bar clutched tightly in his fist: 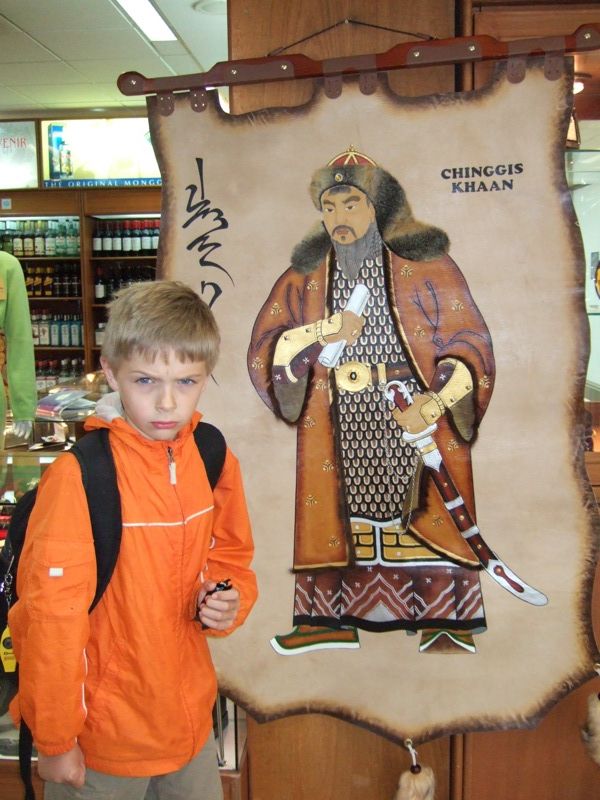 In conclusion, Mongolia was amazing, and both David and I desparately want to go back someday. For now, we'll content ourselves with driving to the Badlands and the Black Hills of South Dakota - which I'll tell you all about in TWO WEEKS!

Until then, please enjoy this photographic proof that Mongolia is so amazing that it sometimes even has rainbows when there is absolutely no rain. (This is a phenomenon apparently called 'cloud iridescence' and one of the coolest things I've ever seen.) 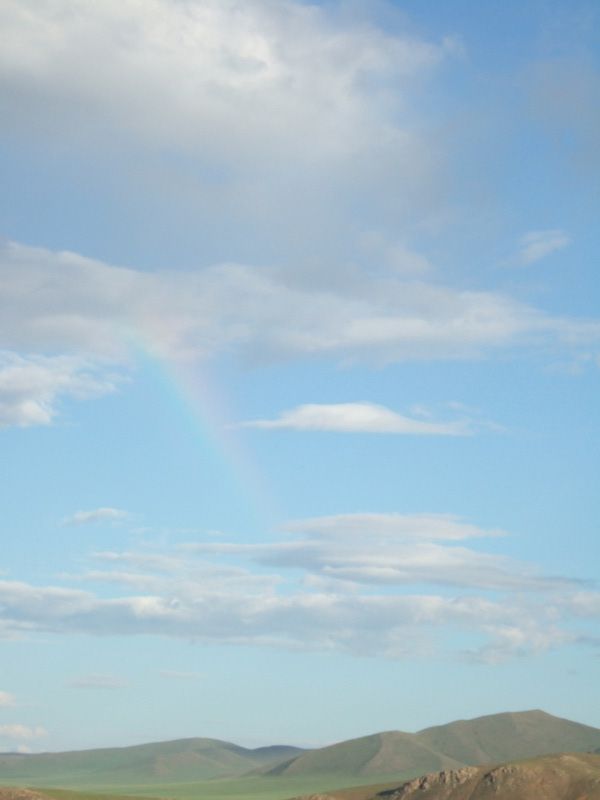